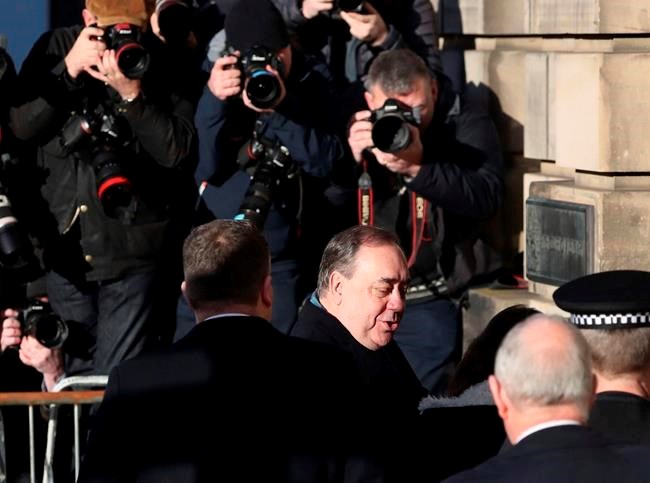 LONDON — Former Scottish leader Alex Salmond was acquitted Monday of a series of sexual , including one of attempted rape.

An Edinburgh jury deliberated for more than five hours before returning not guilty verdicts on 12 charges and returned a not proven verdict on a charge of sexual assault with intent to rape.

Three verdicts were available to the jurors, who had started their deliberations on Friday afternoon following the one-day trial— guilty, not guilty and not proven. The latter two are considered acquittals under Scottish law.

Salmond, 65, had denied all 13 alleged and had claimed in court that some of the charges were “deliberate fabrications for a political purpose.”

The nine women who brought the charges forward either worked for the Scottish government or within Salmond’s Scottish National Party at the time the were alleged to have taken place. The allegations spanned a period between June 2008 and November 2014.

The accusations ranged from Salmond stroking a civil servant’s hair to trying to rape a former Scottish government official in the leader’s official residence in Edinburgh.

After leaving the High Court, Salmond thanked his family and friends for standing by him during the past two years and said “certain evidence” that wasn't presented in court will one day “see the light.”

He also urged reporters outside the court to “go home” in light of the coronavirus pandemic.

“Whatever nightmare I’ve been in over the last two years, it is nothing compared to the nightmare that every single one of us is currently living through," he said. “People are dying and many more are going to die.”

Salmond led the pro-independence Scottish National Party for 20 years and headed Scotland’s semi-autonomous government as its first minister from 2007 to 2014.

A major figure on the Scottish political stage for decades, he took Scotland to the verge of independence from the U.K. by holding a 2014 referendum on separation. He stepped down as leader after the “remain” side won the vote 55% to 45%.