While the Alberta government has lifted certain restrictions on places of worship as part of Stage 2 of its economic relaunch strategy, some Rocky View County (RVC) churches are taking a slow and steady approach to physical gatherings to ensure the s
Jul 3, 2020 1:00 PM By: Jordan Stricker 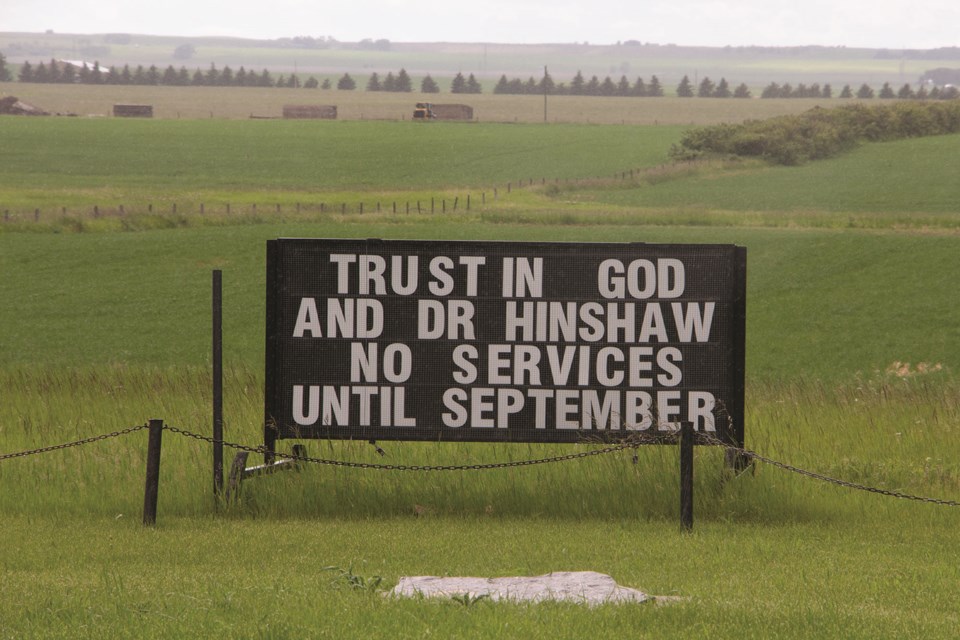 The sign outside of the Irricana United Church. McArthur said there is still alot of work to do before they resume services in September. Photo by Jordan Stricker/Rocky View Weekly

While the Alberta government has lifted certain restrictions on places of worship as part of Stage 2 of its economic relaunch strategy, some Rocky View County (RVC) churches are taking a slow and steady approach to physical gatherings to ensure the safety of everyone involved.

“For the time being we are choosing to not gather and continue online,” said Richard Gilbertson, executive pastor at RockPointe Church in Bearspaw.

“It is subject to modification as the situation develops. We have chosen to go slow and learn.”

According to the updated guidelines released by the province June 22, there is no cap for capacity for places of worship. However, two metres of space or appropriate barriers between members of different households must be maintained.

Places of worship were forced to adapt due to the rapid outbreak of COVID-19. With in-person gatherings brought to a halt, many churches started using online resources to continue providing their services.

“Very quickly, we saw that the digital way of gathering – whether a person took advantage of that live or at some later time – actually had a really good uptake,” he said.

“Many people still have this idea that everything will be as it was before. Not only with church, but also with life in general. I think we are in a time of profound change.”

Before the pandemic, between 250 and 500 people usually attended a service at RockPointe Church. Gilbertson said he was uncertain when gatherings of that size will be allowed again.

Reverend Ruth McArthur, who heads Irricana United Church, said her church also plans to take things slow. Many in her congregation are elderly, she said, so ensuring their safety is paramount. The church plans to resume services in September.

“We are a very vulnerable population,” she said. “We also don’t even know how many people want to come back in September. We still have that work to do.”

“Many people have gone different ways in their communities. We are not like everybody else. We will be much slower at this.”

Irricana United Church is used to seeing between 20 to 30 attendees on a given Sunday, MacArthur said, with up to 150 people attending during Christmas time.

McArthur added not being able to partake in workshops or other educational services has made adapting to the pandemic difficult, but the church is doing its best to stay ahead of it.

She said Irricana United Church plans to hold a drive-in service on July 5, following all necessary guidelines set out by the province.

Although there have been many hurdles, McArthur also said switching to online services has been helpful. The church has seen more people tune into their services during the pandemic.

“We are getting quite a bit more reception between the different avenues that we do,” she said. “We don’t get a lot of people, but we get quite a few more than we did.”