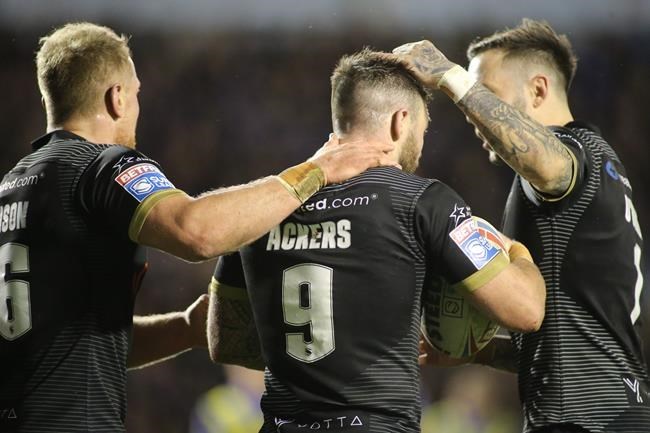 With rugby league on hiatus due to COVID-19, the 26-year-old English forward has finished a college course and been certified as a barber. While the pandemic lockdown has put a halt to his new mobile barbering service "delivering the freshest cuts," Ackers promises to get back to business once it is safe to do so.

Ackers opted for barber studies at the Warrington & Vale Royal College after a club visit by a Rugby Football League official looking to help players prepare for life after rugby.

"Barbering was in there and I took it up and it's something I really like doing — something that really fascinates me," Ackers said in an interview. "I really took to it ... I'm looking forward to doing that in my off-time when this coronavirus leaves us and we can get back to normal — doing that as well as rugby league."

He started the course in November and passed the final hurdle last month.

Ackers has been testing his skills on teammates, with an array of freshly shorn Wolfpack players serving as advertisements on his Instagram page as well as work examples for school.

"They've all been really happy with it," he said.

In the meantime, he is at home in Bolton with fiancee Kirsty and their two kids aged six years old (daughter River) and five months (son Reid). The family time is welcome, as is the chance to recover from a painful broken bone in his foot that he was playing through.

"Nothing to worry about. All good," he said of the injury

There are workouts in his back garden as well as the occasional bike ride.

Ackers joined the Wolfpack after its inaugural 2017 season, leaving the London Broncos. He took some stick at the time for choosing to move across the Atlantic after citing homesickness as the reason behind the move.

He has not regrets about changing clubs, however, given he gets to spend time at the family home while the Toronto team is based in England.

"I've played my best rugby at the Wolfpack, to be honest," he said. "It was a move I couldn't turn down really. Obviously it was being close to home — as stupid as that sounds being in Toronto but it's not, we were over here (in England) for the majority of the year. When I was in London, I was away from my family."

Ackers says he has flourished under Toronto coach Brian McDermott, who led the team to the top-tier Super League this season.

"We've all really bought into him and we all understand and really want the same reward as him. We're just waiting for this virus to go away."

The club has yet to win in Super League so far, losing its first six matches. But Ackers says the Wolfpack, which he describes as a close-knit family, will find their feet when they return to action.

"It's just stupid little errors that have let us down," he said. "We can only learn from that."

Five Wolfpack players self-isolated initially because they weren't feeling well but never did contract the virus. The club says everyone is healthy for now.

This report by The Canadian Press was first published April 7, 2020.

Kane grateful for other pioneers ahead of her own Sports Hall of Fame induction
May 30, 2020 1:43 PM