'Tell me I'm small:' CFL MOP Brandon Banks fired up by a career of being underestimated 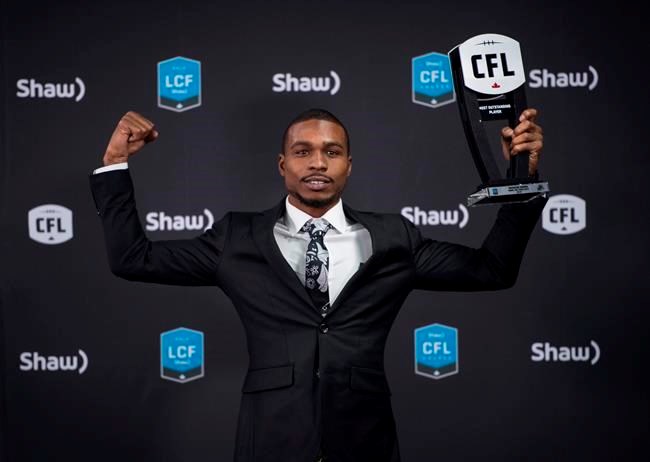 CALGARY — At five-foot-seven and 150-pounds, Hamilton Tiger-Cats receiver Brandon Banks is used to being thought of as the little guy. That just serves as motivation for the CFL's most outstanding player.

The 31-year-old from Garner, N.C., said he's grown numb over the years from hearing that he was too small to play a sport that took him to Kansas State and then a year with the NFL's Washington Redskins before he moved north to Hamilton.

"I've been hearing all my life so when I hear it's just goes to one ear and out the other so I don't really pay it no mind, and if there's a competitive vibe about it I just use it as fire and go prove 'em wrong," Banks said.

"Actually if you want me to do good just tell me I'm small."

Banks was the CFL leader in catches (112), yards (1,550) and TDs (13) — all career highs — as Hamilton posted a league-best 15-3 record. He was rewarded with the league's most outstanding player award Thursday night, beating out Saskatchewan quarterback Cody Fajardo.

Banks broke into the CFL in 2013 with the Tiger-Cats, used predominantly as a kick returner by then head coach Kent Austin. Austin was fired in 2017 after an 0-8 start and replaced by June Jones, who immediately started the five-foot-seven, 150-pound Banks at receiver.

"Oh man the game suits my style of play. Speed and being of small stature kind of excels in this type of football," he said with a chuckle.

Banks said he's not surprised that he's been able to make it as a receiver.

"I had the same stats in college when I was at Kansas State. I just needed someone to believe in me. It was all about opportunity and that's what happened June Jones arrived."

Daryle McNair boarded a plane for the second time in his life to be in Calgary to watch his son Brandon play in the Grey Cup Sunday.

"I knew he had it in him. He's been doing this for a long time and I'm just proud of him," told The Canadian Press. "He's a good kid. He'll always be my kid for real."

McNair, who is also of a diminutive stature, said he heard from many people that Brandon couldn't compete in football.

"I told him never let a man or anybody else tell what you can't do. Just go out there and prove them wrong. He wrote as a kid that I want to play in the NFL one day and that's what he did."

Ticat cornerback Delvin Breaux has his own theory about why Banks has been so successful.

"He's just a savage. I don't know how he do it and it doesn't seem that he's slowing down at all," Breaux said.

"To me he's superhuman."

This report by The Canadian Press was first published Nov. 22, 2019.