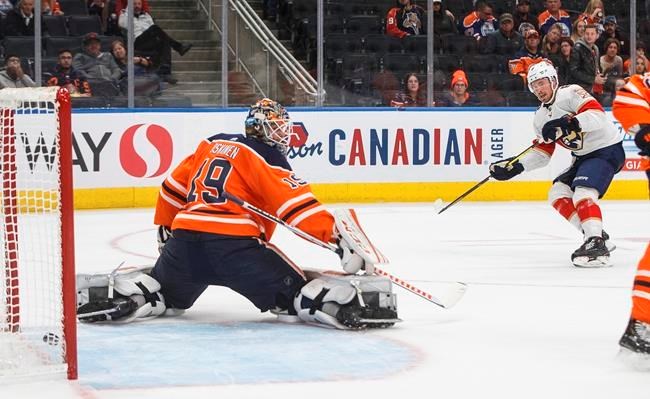 EDMONTON — Allowing three goals on three shots in just over two minutes was a recipe for disaster for the Edmonton Oilers on Sunday.

Brian Boyle and Jayce Hawryluk each had a goal and an assist as the Florida Panthers dominated in a 6-2 matinee victory over the Oilers.

Aaron Ekblad, Noel Acciari, Evgenii Dadonov and Frank Vatrano also scored for the Panthers (5-2-4), who have earned at least a point in eight straight games.

“It was a heck of a game in a lot of ways,” said Panthers head coach Joel Quenneville. “I thought we had good offensive zone time. I thought we made a lot of nice plays, good individual plays on the goals. Certainly (Sergei Bobrovsky) made some key big saves early in the game.”

“I thought our guys were ready they were full of energy and it was a solid, good effort, all 60 minutes,” said the Panthers goalie. “I would say we were solid when they scored the second goal, we were still playing with each other, we were still supporting each other. We just played our game.”

James Neal and Leon Draisaitl responded for the Oilers (8-3-1), who have lost three of their last four games while dropping to 5-1-0 on home ice.

“They played the way we would like to play,” said Oilers defenceman Oscar Klefbom. “They were stronger, they won a lot of loose pucks. They didn’t give up much, and we didn’t create much. Their goaltender played well, and they found a way to score on us.

“We’ve got to play better. Especially at home.”

There was no scoring in the first period. The Panthers put nine shots on Oilers goalie Mike Smith as Edmonton sent seven shots on Bobrovsky.

The Panthers broke the deadlock 31 seconds into the second period as Aleksander Barkov dropped it back to Ekblad, who beat Smith glove side for his first goal of the season.

Florida added to its lead just over a minute later when a defensive miscue led to Boyle waiting for Smith to commit before sending the puck into the net.

The Panthers continued their assault and scored their third goal on three shots within a span of 2:05 when another turnover led to Acciari’s fourth goal of the season.

Smith was replaced in net by Mikko Koskinen after Acciari's goal.

Florida made it 4-0 just 49 seconds into the third period on a nice wraparound by Dadonov, who sent his sixth through Koskinen’s legs.

Edmonton finally got on the board with a power-play marker three-and-a-half minutes into the third frame as Neal tipped home his 10th goal of the season and seventh with the man advantage.

The Oilers cut the lead in half with just under seven minutes to play when Draisaitl celebrated his 24th birthday by slamming home a rebound for his ninth of the year.

Florida put the game away on an empty-net goal by Vatrano, and then got another one with 20 seconds left on a rifle of a shot by Hawryluk with Koskinen back in goal.

The Panthers play the third game of a four-game trip in Vancouver on Monday. The Oilers embark on a three-game road swing, starting in Detroit on Tuesday.