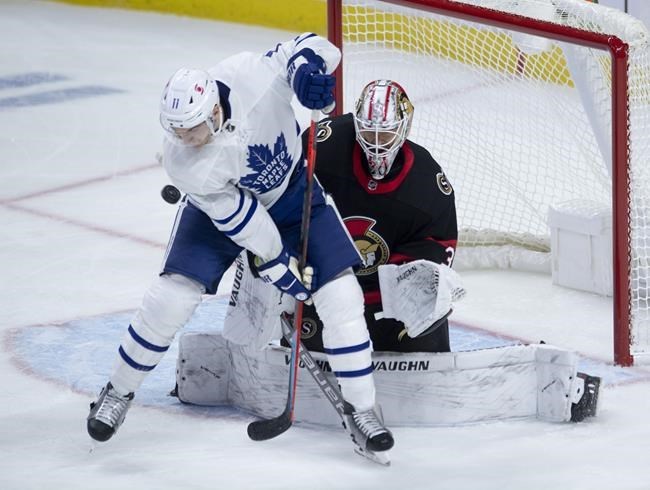 OTTAWA — Youth and age proved to be a winning combination for the Toronto Maple Leafs on Saturday night.

Marner added two assists as the line broke out with seven points in all.

"That line you could tell right from the drop of the puck today that it was going to have a night," said Maple Leafs head coach Sheldon Keefe.

The victory gave the Maple Leafs (2-1-0) a split of the back-to-back set in the nation's capital. The Senators (1-1-0) opened their regular season with a 5-3 win over Toronto a night earlier.

Stutzle, a third overall pick in last year's draft, provided a highlight-reel effort for his first NHL goal but also took a penalty late in the third period as the Senators pressed for an equalizer.

"It was definitely a great feeling but in the end I wanted to come out with a win," he said.

Matt Murray returned to the Ottawa net while the Maple Leafs gave backup goaltender Jack Campbell his first start of the young season.

Toronto, looking to set the tone after a mediocre showing on Friday, came out flying in the early going. Ottawa withstood the early pressure and opened the scoring at 10:55.

Nikita Zaitsev fired a rising shot from the point that hit Paul's mid-section in the slot. The puck landed at Paul's feet and he slapped it past Campbell for his first goal of the year.

Toronto pulled even moments later as Marner made a nice back pass to Thornton, who snapped the puck past Murray from the faceoff circle.

It was the first goal of the year for the 41-year-old forward, who's nearly two decades older than his linemates. Thornton signed a one-year deal with the Maple Leafs in the off-season.

"We have a lot of fun out there," Thornton said. "I think we'll continue to keep growing as a line because we are having fun and we get excited before every game.

"I think you can tell each game we're getting better and that's a real good sign."

Marner made it 2-1 at 1:10 of the second period. He grabbed a loose puck off the faceoff and wired a shot that deflected off Erik Gudbranson and past Murray.

Marner was at his flashy best again in the third period as he set up Matthews at 2:42.

With Toronto on the power play, Marner dropped the puck between his legs and his linemate blasted a one-timer for his first goal of the year.

"I think we were really using our creativity out there and that's something I think we weren't doing the first two games," Marner said.

Later in the period, the 19-year-old Stutzle showed great timing by connecting with an arching puck just after it hit the ice, beating Campbell on the short side at 11:44.

His tripping penalty came with just 2:49 left in regulation. Ottawa pulled the goalie in the final minute for an extra attacker but couldn't beat Campbell despite some late pressure.

"It was a back-to-back game for our team and we needed to have a great response," Keefe said. "We needed great goaltending and he brought that for us."

The Maple Leafs outshot the Senators 40-19.

Both teams made lineup changes as Colin White replaced Artem Anisimov for Ottawa. Nick Robertson got the nod for Toronto ahead of Alexander Barabanov.

Robertson played just two minutes 20 seconds before leaving the game with an apparent knee injury. Keefe said Robertson will likely get an MRI exam on Sunday but that it looks like he's "definitely going to miss some time."

The Maple Leafs opened the season Wednesday with a 5-4 overtime victory over the visiting Montreal Canadiens.

The Senators will continue their four-game homestand Tuesday with the first of two straight games against Winnipeg. The Maple Leafs will return home to play the Jets on Monday night.

This report by The Canadian Press was first published Jan. 16, 2021.