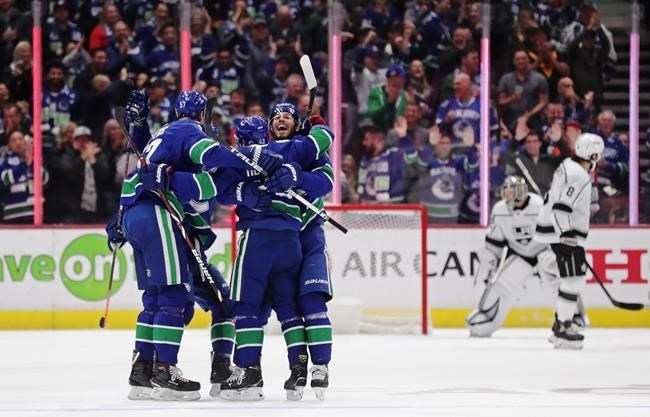 VANCOUVER — Coach Travis Green says his Vancouver Canucks were in need of a victory as they headed into their home opener.

The squad had dropped their first two games of the season and with so many new faces in the room, a positive result could have a big impact, he said.

The Canucks (1-2-0) answered the call with a decisive 8-2 win over the L.A. Kings on Wednesday night.

"We needed a win. Not necessarily because it was two losses. You just want to get a win," Green said after the victory. "And when you have a new group as well you're not expecting to score eight goals. We'll take it."

The contest marked milestones for a number of Canucks.

Rookie Quinn Hughes buried his first NHL goal on the power play 5:26 into the first period. He wound and sent a slap shot flying from the point, sending the puck soaring past Kings' netminder Jonathan Quick.

"It's something I have been thinking about for a long time, just to get that one under my belt," said the 19-year-old defenceman.

"I've told everyone from the start I'm going to try to get better every game and from game 30 I will be a different player. I feel really good right now."

Seven different Vancouver players found the back of the net on Wednesday.

Brandon Sutter had two goals and an assist for the Canucks, while Tanev tallied a goal and a helper. Elias Pettersson, Josh Leivo and Alex Edler also scored.

The team has been playing well, despite settling for losses in the first two outings, so it was "only a matter of time before the flood gate opened," Miller said.

"We continue to do a lot of good things. I don't want people thinking that we lost the first two games, it's a bad start," he said. "I think we felt really comfortable and confident after those games coming into this one. It's nice to see the pucks finally start to go in."

Miller, who was dealt to Vancouver from Tampa Bay in June, got his first goal in a Canucks' jersey midway through the second period on Wednesday.

He sent a back-handed pass into traffic from below the goal line, and the puck ricocheted off L.A.'s Ilya Kovalchuk and into the net.

"A couple lucky bounces, a couple of good plays made by other players," Miller said of his performance. "So it's nice to see that happen. But at the same time, you're not worried about (personal performances). To get the first win here on home ice felt really good tonight."

Canucks netminder Jacob Markstrom faced a barrage of shots and made 37 saves.

"A team like that should not be beating a team like ours 8-2. There's absolutely no way," he said.

L.A. came into the contest fatigued after fighting the Flames for a 4-3 overtime win on Tuesday, but Doughty said playing back-to-back is no excuse for a poor performance.

Coach Todd McLellan said there wasn't anything he liked about the Kings' game on Wednesday.

"Right off the bat we got ourselves in trouble, we weren't under control, we took penalties we weren't able to kill, turned the puck over," he said.

As the game wore on, things continued to get away from the players and "just crumbled," the coach said, adding that the result shows that the group has "a long, long way to go."

"Some of the players that I think we've counted on, or we need to count on, have to play a lot better or they don't belong in the league and we'll have to look at some individuals," McLellan said.

NOTES: Kings defenceman Alec Martinez headed to the dressing room early in the third period after taking a puck to the back of the head. He returned to the bench before the end of the game. ... Sutter, Tanev and Edler were all named assistant captains for the season.

This report by The Canadian Press was first published Oct. 9, 2019.