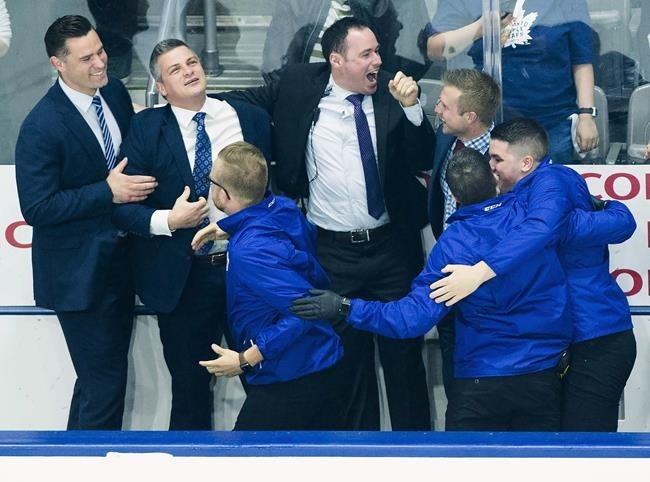 TORONTO — What stands out to Kevin Abrams about Sheldon Keefe above everything else has been his ability to change — in hockey, and most importantly, in life.

Named head coach of the scuffling Maple Leafs on Wednesday after Toronto fired Mike Babcock, the 39-year-old's road to arguably the highest-profile and highest-pressure NHL job has been long and winding.

From controversial, headline-grabbing junior star to injured minor leaguer to owner/coach/general manager of his own team, Keefe's path has been unconventional.

"He's the consummate student of the game," said Abrams, who's known Toronto's new bench boss since the mid-2000s. "He works harder than anyone at making himself better and thereby makes his players better.

Many hockey fans, however, first learned Keefe's name for all the wrong reasons two decades ago.

A brash, high-scoring winger in the Ontario Hockey League, he was closely tied to disgraced agent/coach David Frost and famously refused to shake the hand of commissioner David Branch at the Memorial Cup in 2000.

Selected by the Tampa Bay Lightning in the 1999 NHL draft, Keefe was also a friend and teammate of Mike Danton, who was convicted of plotting to kill Frost, his then-agent, in a bizarre murder-for-hire scheme while playing for the St. Louis Blues in 2004.

Frost, meanwhile, was acquitted in 2008 on four counts of sexual exploitation dating back to his time coaching a junior team in Deseronto, Ont., where both Keefe and Danton, who was born Mike Jefferson, played in the 1990s.

Keefe's playing career was cut short by a knee injury and he eventually severed ties with Frost before starting to remake his image in the game and wider society.

He bought the junior-A Pembroke Lumber Kings when he was still playing in the American Hockey League and took over as head coach and GM soon after blowing out his knee at age 25.

The native of Brampton, Ont., won a record five straight league titles in the town located about 150 kilometres northwest of Ottawa, culminating with a 2011 victory in the then-RBC Cup, junior-A's national crown.

Leafs GM Kyle Dubas — at the time a 20-something whiz kid in charge of the OHL's Sault Ste. Marie Greyhounds — hired Keefe to be his head coach midway through the 2012-13 season. And after Dubas signed on as an assistant GM with Toronto in 2014, Keefe was tabbed to coach the AHL Marlies a year later before winning the Calder Cup in 2018.

"Everyone loves a second-chance story," Abrams, who was head coach/GM in Pembroke when Keefe first bought the team before becoming the league's commissioner, said in a telephone interview. "It shows people that might think they had difficult times in their life or some choices they wish they could do over, that there's always an opportunity to turn the page.

"That resonates with players. If they think they deserve another chance, maybe they'll think he'll give them one because he's been given one."

Keefe will have his work cut out for him with the Leafs — a talented, mistake-prone club that entered training camp with Stanley Cup hopes, but finds itself outside the playoff picture.

Mired in a 0-5-1 stretch heading into Thursday's game in Arizona against the Coyotes, Toronto has been horrible defensively, looked uninspired in attack, and produced stunningly bad results on both special teams.

There's no doubt Keefe and Dubas are more in sync than the latter and Babcock ever were. Dubas wants the Leafs, who have tremendous firepower up front with Auston Matthews, John Tavares, Mitch Marner and William Nylander, to a play fast, skilled game.

Keefe is on the same page.

Abrams said he expects Keefe — described by many as a players' coach — to mesh well with Toronto's locker room following his long climb to the NHL.

"He's proven that his work ethic and his ability to develop players and apply it to today's athlete makes him a really attractive commodity," Abrams said. "He's had great success in different ways.

"He continues to be a terrific work in progress, and I expect him to do the same in the NHL. He'll find a way to achieve success with a different kind of athlete."

"He was awesome for me down in junior," Cousins said. "He lets guys play, but at the same time he holds you accountable."

"He's a guy you want to play for," Marlies winger Jeremy Bracco added. "You go through a wall for a guy like that."

For all the ups and downs in his life and career, Abrams believes Keefe's path and road to redemption is one to celebrate.

"It's a very human story," he said. "Your humanity's part of who you are when you're coaching.

"He's shown that at every level."

— With files from Alexis Belanger-Champagne in Brossard, Que.