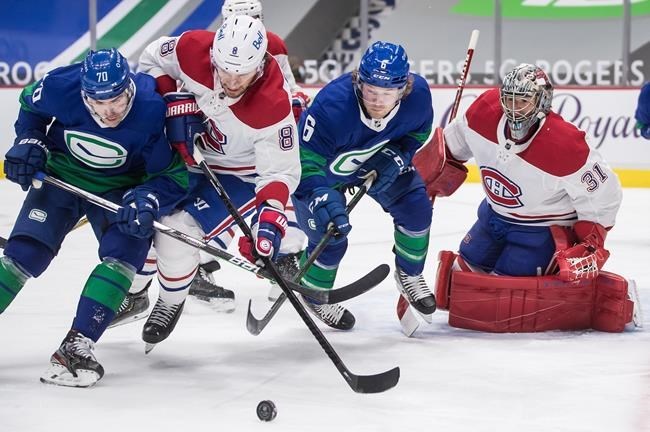 VANCOUVER — Corey Perry scored in his debut for the Montreal Canadiens on Saturday -- even if putting the puck in the back of the net wasn't exactly his aim at the time.

Midway through the second period, the veteran right-winger slid a puck through the crease and saw it glide through the pads of Vancouver netminder Braden Holtby.

“I'll always say I wanted to shoot but I think I did see (Canadiens centre Jesperi Kotkaniemi) backdoor and I think it went off the d-man's stick or something and in the net," Perry said after Montreal topped the Canucks 5-2.

"But (Kotkaniemi) made a great play going to the back post and it kind of opened up a seam for me."

Perry slotted in for Joel Armia who suffered a concussion in a hit from Vancouver’s Tyler Myers as the Canadiens trounced the Canucks 7-3 on Thursday.

Montreal was quick to avenge Armia's injury on Saturday.

Edmundson and Myers dropped the gloves 3:09 into the first period. The Montreal defenceman got a few good whacks in before the pair were separated by the officials and each given a five-minute sanction for fighting.

"Our team wasn't a big fan of the hit and he stepped up and didn't back away," Edmundson said of the fight. "So you got to respect that. But I still wasn't a fan of the hit.”

After 14 seasons with the Anaheim Ducks, Perry spent last year with the Dallas Stars. The 35-year-old signed a one-year, US$750,000 deal with Montreal in December.

Getting back on the ice with the Canadiens felt good, he said.

“It was quick, the first couple shifts. But once you get in the flow of the game, I've played a few games in this league so it comes back," Perry said of his debut. "I felt good overall. The hands felt good. I played with some pretty good players tonight so it made it easy on me.”

Saturday’s game — the third in four nights between the two sides — also saw Nick Suzuki, Brendan Gallagher and Joel Edmundson score for Montreal (4-0-2). Jonathan Drouin had a goal and an assist.

Carey Price made 23 saves to collect his 350th NHL win.

The Canadiens now have points from their first six games of the season, all of which were played on the road. The only other team to accomplish that feat in NHL history is the 1968-69 Canadiens.

Montreal coach Claude Julien said there's still work to be done, but there are a lot of positives to come out of his team's first trip of the year.

“We took it one game at a time, I thought we played well and we got better as the games went on, and obviously building a little bit more chemistry along the way as well on the ice and off the ice," he said.

"So, there's a lot of good things that came out of this road trip and as a coach, you have to be happy when you can come up with that many points in that short trip."

Elias Pettersson ignited a comeback 3:50 into the final frame, batting a long shot by defenceman Jordie Benn out of the air and between Price's legs for his first goal of the season.

The marker snapped a five-game point-less skid for Pettersson, the longest drought of his short career.

Nils Hoglander tied the score at 2-2 just over two minutes later with a backhanded shot from the slot that beat Price stick side.

Gallagher put away the game winner 9:07 into the third with a wrist shot from low in the faceoff circle.

Drouin added some insurance about two minutes later, beating Holtby on a breakaway, and Edmundson scored an empty-netter with 2:54 left on the clock.

Despite the final score, Canucks coach Travis Green liked much of what he saw from his squad in the loss.

It was a tight-checking game where Vancouver hit some posts, saw some shots sail wide of the net but stuck with the game, he said.

“I felt bad for our group," Green said. "I thought for 50 minutes it may have been our best game to date. A couple of mistakes cost us the game in the last 10 minutes.”

After turning heads in the Edmonton "bubble" during the playoffs last year, the Canucks hoped to take another step this season.

So far, that hasn't been the case.

“Obviously it isn’t the start we wanted, but I don’t think anyone’s sulking and hanging their heads at this point in time," defenceman Quinn Hughes said Saturday.

"We’re only seven games in and we’ve got a lot of hockey left to play. We’ve got time to figure it out, but hopefully sooner rather than later.”

The Canucks will host the Ottawa Senators in the first match of a three-game series on Monday. The Canadiens are headed back to Montreal where they'll host the Calgary Flames on Thursday.

NOTES: Suzuki has a point in all six of Montreal's games this year, tallying two goals and four assists to start the season...Tyler Toffoli was credited with an assist on Perry's goal, extending his point streak to four games (five goals, three assists)...A pair of veteran defencemen returned to Vancouver's lineup... Alex Edler slotted back in after missing Thursday's tilt with an undisclosed injury and Benn made his season debut after sitting out the start of the year due to COVID-19 protocols.

This report by The Canadian Press was first published Jan. 23, 2021.