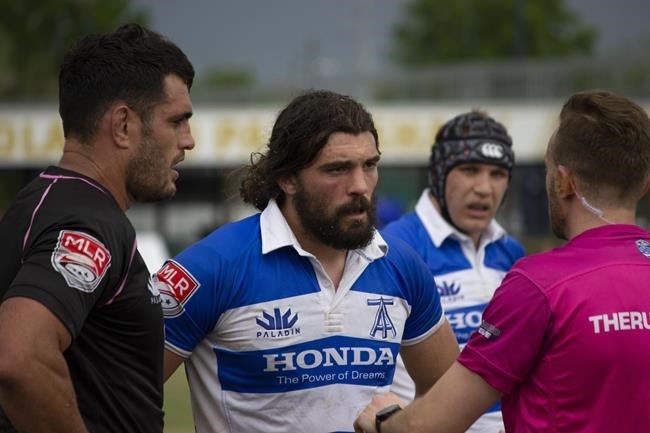 Call Toronto Arrows co-captain Lucas Rumball on WhatsApp and the photo that appears is an upside-down close-up of his peaceful face, with a gaping gash in the forehead.

It's the kind of ugly wound that might elicit conversation between TV detective and pathologist on the weapon that caused it. Chisel? Blade?

Turns out it was a Uruguayan, back in February 2016.

"That was from my first (Canadian) cap years ago," Rumball said with a belly laugh as he took a break from doing laundry in Marietta, Ga., which the pandemic-displaced Arrows now call home.

"I went head-to-head with a big Uruguayan. And they stapled it up and it split open the next week, so I had to get it recut and re-stitched. So the doctor took a photo for me."

"Honestly, it's not that bad of a scar," said the six-foot-three 230-pound flanker from Toronto.

There was more evidence last Sunday that if you're looking for a hard-nosed sidekick with a high pain threshold, Rumball's your man.

The 25-year-old flanker started leaking in the first half of a 40-30 loss to the San Diego Legion.

"I got hit in the right part of the face there. It just split," he said, as if detailing a minor scrape on his car.

"That one's about eight stitches. Basically your physio staff looks to cover you up the best you can to keep the cut from reopening or you from bleeding everywhere. It's a tough spot to cover — the cheek — especially when you're sweaty and you're dripping and nothing's really sticking to you."

For a while, Rumball looked like the Mummy with bandages across his face and around his head.

"I got to look at it after the game. I didn't know what it looked like during. I looked absolutely ridiculous," he said with a chuckle. "It's definitely the craziest tape job I've ever had. Fair play to the training staff. It actually lasted a lot longer than I thought it was going to."

He got some more medical attention at halftime — and three more stitches after the match.

Facial contusion or not, Rumball will be back in action Saturday — sticking his face where the opposition doesn't want it — as the Arrows (4-7-0) visit the Austin Gilgronis (6-5-0) in Major League Rugby play.

Austin, whose roster includes Canadians Jeff Hassler, Cole Davis and Reegan O’Gorman, is coming off a 28-9 win over the Houston SaberCats. Toronto has lost four of its last five.

While not one to make excuses, Rumball says the prolonged stay in a hotel south of the border has taken a toll.

"I think it's been tougher than we all expected … It's been difficult to get away from the game," he said.

It's been difficult on the field as well.

"It's a really tough one to swallow this year," said Rumball. "We've had tons of games where one or two plays go our way and we're sitting with a completely different record closer to the top of the table. Its kind of been the story of the year … We have to figure out a way to win in these tight games."

"You can't use being down here as an excuse," he added. "Because it's pro sports. it's what you get paid to do. You have to step up to the plate. But I think it's just been tough for us to find that winning way, when so much has been going on around us outside of rugby."

Rumball says the Arrows play close attention to what's happening north of the border, in the hope they can return home soon. The federal government's recent exemption for the NHL playoffs involves travelling by private jet, which is not an option for the rugby team.

Rumball had a new look going into the San Diego match, having chopped off his trademark long locks. His hair had been so long that he was asked, as a prank, to pretend to be "Aquaman" and "Game of Thrones" star Jason Momoa when the American actor took in the Vancouver Sevens.

Rumball said his teammates took the initiative on the recent haircut.

"I had been talking about getting a haircut for a bit and during our bye week … the boys had enough, I think, of me talking about it and they booked me a haircut on my (credit) card," he said. "So I pretty much had to go the next day or just eat the cost."

He says his girlfriend had been putting up with the flowing locks for close to two years.

"She was missing the face she met," he said.

While the Arrows have not enjoyed much luck this season, Rumball has been a force.

Going into weekend play, he ranks first in breakdown (20, the player in second place has nine) and defensive ruck arrivals (108), third in attacking ruck arrivals (211), fifth in tackles (134) and seventh in carries (105).

Rumball has won 35 caps for Canada with the last coming in October 2019, when the Canadians lost to eventual champion South Africa at the World Cup in Japan. He has captained Canada six times, becoming the third-youngest skipper (at 22 years 218 days) when Canada faced Russia in June 2018.

Rumball is a graduate of the Ontario Blues senior men’s provincial program and Queen’s University. He also played club rugby for Balmy Beach.

This report by The Canadian Press was first published June 11, 2021.