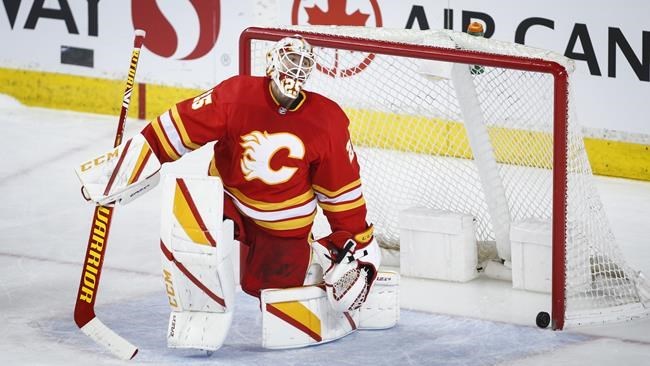 CALGARY — The Ottawa Senators emerged victorious in their fifth battle of the season with the Calgary Flames Sunday night.

Drake Batherson scored the game-winner in a four-round shootout to give Ottawa the 4-3 decision at the Scotiabank Saddledome in Calgary.

"I thought we played a good game even when (the Flames) made their push in the third," Senators forward Colin White said.

"We hung in there and won it."

The Sens have now won three of five against the Flames this season. Ottawa also has five wins in their last eight contests.

Calgary earned just one point from the game, leaving them three behind the Montreal Canadiens for fourth place in the North Division.

"It stings right now," Flames defenceman Mark Giordano said. "We know how important these points are. We've got to come out better than we did. Obviously, in the third we had a great push. But we've got to find a way to get two points in games. That's the bottom line right now."

Mark Giordano, Johnny Gaudreau, and Noah Hanifin scored for Calgary (11-12-3), while Matthew Tkachuk added a shootout goal in the loss.

Matt Murray made 31 saves for Ottawa, earning his seventh win of the season.

"He was solid. He looked calm back there tonight. He was seeing everything. The only goals (Calgary) got were a deflection and a rebound goal that came right back to the guy. He gave us every opportunity to win," Senators head coach D.J. Smith said post-game.

Jacob Markstrom made 19 saves for Calgary.

Brown scored the first goal of the game with 6:12 to play in the first. He fired the puck from behind the right face off circle. The puck redirected off a Flames defenceman before sliding through Markstrom's legs.

Dzingel scored for the second consecutive game to give Ottawa a 2-0 advantage before the intermission. He finished a two-on-one play, taking a pass from Chris Tierney before tapping the puck past Markstrom.

Senators forward Austin Watson and Flames forward Zac Rinaldo dropped the gloves within the opening three minutes of the second period, in hopes of sparking their respective teams.

It worked, briefly, for the Flames. Giordano scored his third of year 88 seconds later, firing a shot that deflected off Sens' forward Josh Norris before beating Murray.

But Ottawa would restore their two-goal advantage thanks to Colin White's seventh goal of the season less than four minutes later.

Gaudreau scored in the third period to bring Calgary, once again, within a goal. It was his 11th of the season. The Flames would finally even the score thanks to a goal from Hanifin with over eight minutes left in regulation. It was the second goal in two games for the defenceman.

Calgary thought they had the game won later in the third as Brown tried to give the Senators the lead with his second of the night. With Markstrom out of position, the puck struck the right leg of Flames defenceman Juuso Valimaki and missed the net.

"It was an important time to keep the puck out of our net," Valimaki said.

The Flames and Senators hoped overtime would decide things, but to no avail. Batherson's shootout winner finally ended the battle in Ottawa's favour.

NOTES: The Flames had eight power play opportunities Sunday night, but only scored once with the man advantage. The Senators were 0-for-2 on the man advantage...Sunday night's game once again saw Ryan Huska coach for the Flames. Calgary hasn't yet won a game since firing head coach Geoff Ward before the weekend. Incoming head coach Darryl Sutter will officially take over Monday.

This report by The Canadian Press was first published March 7, 2021.