76ers season has gone south with each visit to Toronto 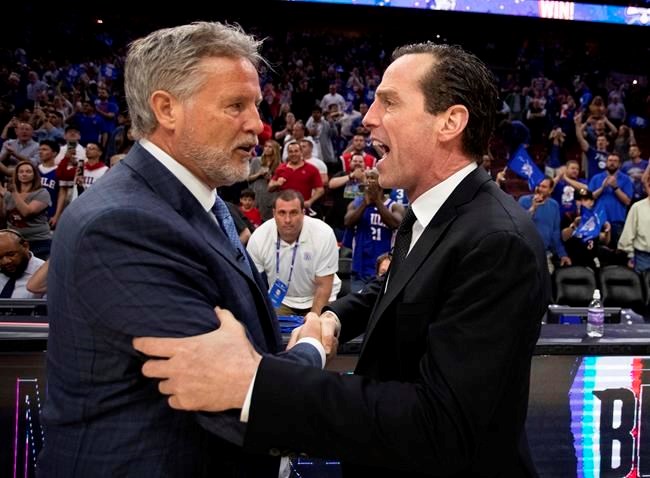 PHILADELPHIA — The 76ers have gone south in Toronto.

Sixers coach Brett Brown wants the season series to come with an asterisk.

Sure, the Raptors went 3-1 against the Sixers, but Philadelphia has evolved thanks to a pair of splashy trades this season that could skew the perception that Toronto has been the dominant team in the series. The Sixers head this week to Toronto for Game 1 of the Eastern Conference semifinal with their starting five intact for the first time all season: All-Stars Joel Embiid and Ben Simmons, midseason acquisitions Jimmy Butler and Tobias Harris, and JJ Redick failed to start a game together against the Raptors.

"We all understand what the math says with our success in Toronto, and it's not flattering," Brown said. "But it's also not directed to the team that we have. And so you can credit it or you can discredit it. I'm discrediting it. I think that we have a new group, we have a new opportunity."

The Sixers and Raptors both dropped their playoff opener before winning four straight; the Raptors against Orlando and the 76ers eliminated Brooklyn. The two franchises have not met in the playoffs since Allen Iverson, now a regular at his courtside seat, and the Sixers needed seven games to top Vince Carter and the Raptors in 2001.

Toronto's homecourt edge as the No. 2 seed in the East looms large — the Sixers have lost 13 straight games at Scotiabank Arena since their last win there on Nov. 10, 2012.

The Raptors made their own big deal when they acquired Marc Gasol from the Memphis Grizzlies at the trade deadline and will count on him to try and limit Embiid. Gasol didn't play in any of the four games in the season series. The Sixers know they'll have their own challenges in slowing down the skilled passer as well as Kawhi Leonard and former Villanova star Kyle Lowry.

The dog days of the Process well behind them, the Sixers were built to make a deep run this season. Brown has proclaimed the Sixers are good enough to play for a championship and general manager Elton Brand made the bold deals for Butler and Harris to give the star power needed to get there. Team owner Josh Harris has offered only lukewarm support for Brown and made no guarantee the coach would return for a seventh season.

Beating the Raptors could cool that hot seat.

"We have a team that is slowly coming together," Brown said. "They don't have the luxury of lots of games and lots of context to share upon. And so you have Jo, you don't. You have Jimmy Butler, you don't. These guys have been great on trying to form a team."

The Sixers tanked in a surprising Game 1 loss to Brooklyn, then made all the right plays over the next four games that was highlighted by a dominant 120-100 Game 5 on Tuesday night. The Sixers stunned the Nets with a 14-0 run to open the game in front of the loudest and rowdiest packed house of the season and never faced any fight from a Brooklyn team ready for summer break.

Embiid, who missed a playoff game with a bad left knee, offered a brash take on Philly's run.

"You've got some great teams in the league. We're about to play one of them and then the next one will not be easy, either Milwaukee or Boston," he said.

Embiid took a parting shot on Instagram before the series started and took a social media sabbatical. He posted a slideshow of him playing against Brooklyn, Toronto, Boston and the Golden State Warriors — a possible combination of teams that Sixers would have to beat to win their first NBA title since 1983.

Even with the knee injury, Embiid had four double-doubles in four games against the Nets, the first 76er to open the playoffs with four straight since Hall of Famer Charles Barkley in 1986. Dating to last season, Embiid has scored 20-plus points in five straight playoff games, the longest streak since Iverson did it a franchise-best 22 straight times from 2001 to 2003.

"I didn't finish up the regular season, so just getting my rhythm and getting healthier and just doing the right things I think is working out well," Embiid said. "Still got a long way to go, but as long as I'm alive, I've got to keep pushing."

He wants to keep that push going into June.