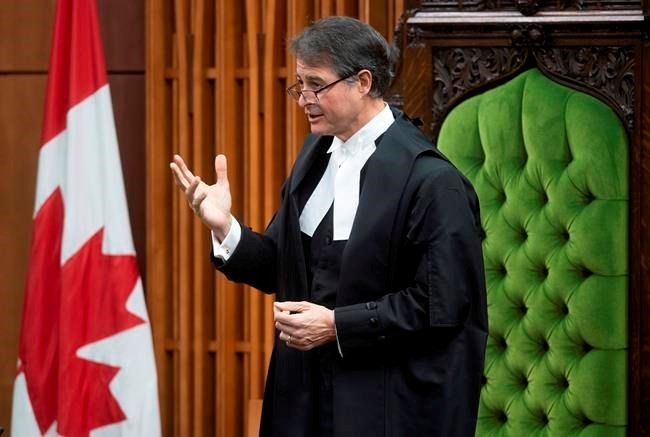 OTTAWA — As millions of Canadians contemplate what it will take to work long-term from home in order to control the spread of COVID-19, MPs are considering a very particular problem: how to virtually vote.

Options to do so are now on the table as members of Parliament and hundreds of behind-the-scenes staff begin to plan for what their headquarters could look like come fall, to the extent they can.

"Is it better to meet in person or virtually come September?" House of Commons Speaker Anthony Rota said to the procedure and house affairs committee Monday.

"COVID has been changing so drastically along the way it's very difficult to predict what will happen in a month and a half or two months from now."

But in the meantime, a mobile app could be deployed to allow MPs to vote whether they're on Parliament Hill or off, Rota said.

The app is fully bilingual, meets accessibility standards, and is secure, including providing  administrators the ability to know where MPs are when they vote and authenticate their identities.

Finding a way for MPs to vote while limiting the risk of COVID-19 transmission has been a sticking point for the Liberal government as it has faced pressure from the Opposition Conservatives to allow for the full resumption of Parliament.

MPs have grappled with how they can do their jobs ever since Parliament, like much of the rest of the country, shut down in mid-March to slow the spread of COVID-19.

Several compromises have been reached along the way, including a hybrid model that allows MPs to participate in person or virtually in debates or committee meetings.

Those debates and meetings have been limited in scope and the Opposition Conservatives have pressed for a full return to business that would expand the powers MPs have available to press the government and get more information.

Right now, Parliament is expected to resume sitting full-time on Sept. 21, though there is a single sitting day scheduled for this week.

Summer sitting days were among the concessions opposition parties won as they've fought for greater accountability.

The virtual voting plan is best to be rolled out come fall, Rota said, citing the time needed to get the right system in place.

In addition to an app, he's presented MPs with the option of a video-conferencing approach that would piggyback on the hybrid arrangement in place now.

Rota's report, however, raised several concerns with that, including unstable internet connections, the amount of time it would take, and the sensitive issue of MPs not being present to vote.

A video-conferencing approach would need to name each MP in turn to double-check an MP isn't on mute or having trouble with the connection.

"The absence of members would be highlighted to the public, to the media and to other members of the House, contrary to current practice," the report said.

Conservative MPs have come under scrutiny in recent weeks for their absence from the current special COVID-19 committee of MPs that replaced the normal House of Commons sitting.

Unlike in regular sittings, for the committee it is possible to see exactly who attended, and tallies have suggested many Tories haven't shown up regularly.

When it comes to virtual voting, the Conservatives have largely opposed the approach, citing a resistance to anything that keeps MPs off the Hill.

They argue it is possible to adjust regular procedures to allow for physical distancing, and had asked for a look at how voting could take place in person.

Pandemic-safe options could include lining up outside the Commons chamber to vote, voting in shifts or voting by proxy, Rota's analysis suggested.

Among the issues in-person voting raises is the question of time and resources needed to keep the chamber clean as well as how long the votes themselves would take.

The MPs are aiming to have their recommendations in place later this month.

This report by The Canadian Press was first published July 6, 2020.