A spring snowstorm greeted the best drivers in Canada in the second round of the Canadian Rally Championship (CRC). The Rocky Mountain Rally was held in the hills near Bragg Creek and Porcupine Hills south of Nanton, May 28 and 29.
Jun 1, 2010 12:00 AM By: Airdrie Today Staff 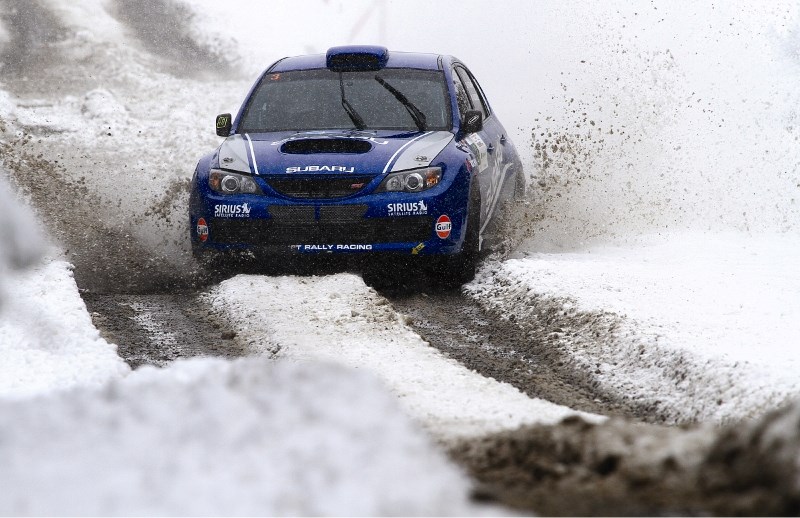 Four-time Canadian champion Patrick Richard drives through winter conditions during the 2010 Rocky Mountain Rally, May 29. Snowy and slushy conditions were the talk of the event, the second leg of the Canadian Rally Championships, held near Bragg Creek and Nanton over the weekend.

A spring snowstorm greeted the best drivers in Canada in the second round of the Canadian Rally Championship (CRC).

The Rocky Mountain Rally was held in the hills near Bragg Creek and Porcupine Hills south of Nanton, May 28 and 29. Four-time Canadian champion Patrick Richard said, before starting the event, the changing conditions would make it a “crapshoot.”

“Unfortunately, there is about 10 centimetres of snow out there. I would be lying to you if I didn’t say I was scared…” said Richard. “We are expecting to see a lot of snow on the stages… as always at a rally, we need to get through it and make the best of it. No matter what we have on the car, we are going to try and go flat out.”

“Conditions are very tough,” said L’Estage. “It’s tough conditions because it’s not really winter, its like slush and snow so it’s very hard for tire choice. That’s the Rocky Mountain Rally, you never know what you are going to get.”

Local driver Hardy Schmidtke, from Cochrane, said he was prepared for whatever conditions his home race presented.

“This year, the Rocky Mountain Rally is pretty much going to be a snow event, and I think we are ready for that,” said Schmidtke. “We have done some local events that are similar so I think we are prepared.”

Schmidtke finished 19th overall in the first round of the championship back in February, running his 2002 Subaru Impreza WRX in the production GT class, but decided to upgrade his car to enter it into the open class of competition.

“Those (production GT) cars still perform very well, they are extremely fast but to compete with the top five guys, which we are trying to do… you have to step up to an open class,” said Schmidtke. “The class is open to performance, to maximize every bit of performance you can get out of the vehicle.”

With a car that can compete with the front-runners, Schmidtke’s expectations were to finish where he started, in the sixth position.

The teams ran six stages in the hills near Bragg Creek, May 28, with Antoine L’Estage taking a minute-and-a-half lead over rival Richard.

The second day of competition saw a heavy snowstorm hit the forest roads of Skyline Ranch south of Nanton, which would close two legs of the planned stage routes due to safety concerns. Drivers ran five more stages in the winter conditions.

Tire choice hurt Richard, as he fell to third overall behind Maniwaki winner Bruno Carre, but would claw his way back to second before the finish, only 20 seconds in front of third place finisher Carre.

L’Estage dominated the event, winning with a total of one hour, 11 minutes and 48 seconds, a full two minutes over Richard.

Schmidtke’s weekend went exactly how he had hoped, starting and finishing in the sixth spot. At the end of the seventh stage. the Cochrane driver had climbed to fifth, but would retain sixth at the end of the 11 stages, one hour, 18 minutes and 52 seconds, about seven minutes behind the winner.

The drivers of the CRC will now clean off their cars, replace any parts that need to be changed and will return to action in the Rallye Baie Des Chaleurs from New Richmond, Quebec July 2-3.