Airdrie’s Jake Neighbours’ future was made a little more clear May 4 when he was selected fourth overall in the Western Hockey League (WHL) Bantam Draft by the Edmonton Oil Kings.
May 11, 2017 12:00 AM By: Airdrie City View 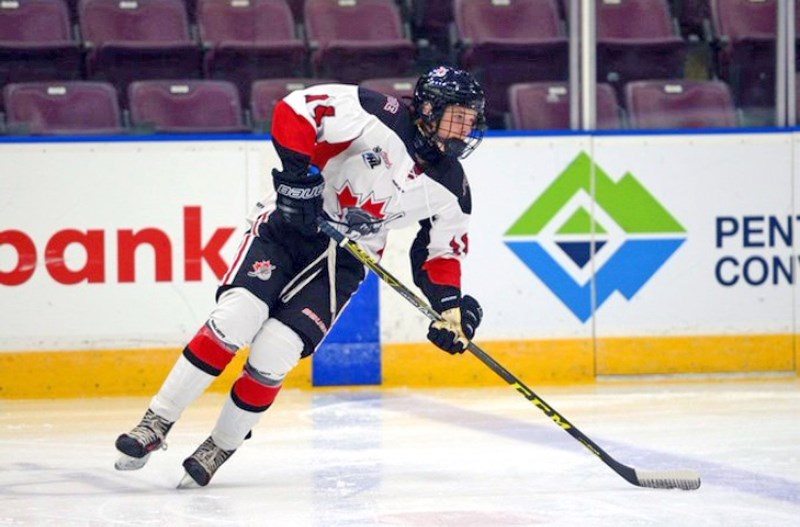 Selected fourth overall by the Edmonton Oil Kings, Jake Neighbours became Airdrie&#8217;s highest pick in the Western Hockey League (WHL) Bantam Draft since 2008, when Ty Rattie was selected second overall. Neighbours will play one year of midget hockey before he tries to crack the roster in Edmonton for the 2018-19 WHL Season.

Airdrie’s Jake Neighbours’ future was made a little more clear May 4 when he was selected fourth overall in the Western Hockey League (WHL) Bantam Draft by the Edmonton Oil Kings.

Neighbours now knows the location of his potential first landing spot in the WHL and couldn’t be more thrilled with hearing his name called by the two-time WHL Champions.

“They are a great organization. I feel welcome already. It’s a pretty exciting moment and surreal,” Neighbours said. “Edmonton was my number 1 team I wanted to go to. We let them know that and things worked out perfectly. I’ve landed right where I wanted to be.”

Heading into the draft, Neighbours had a goal to be drafted in the top five.

With the Oil Kings, Neighbours joins a club that has witnessed immediate success since rejoining the WHL prior to the 2007-08 season.

The Oil Kings has been one of the more successful franchises in the league, having made the playoffs in seven of its first 10 seasons, making the WHL Finals three straight years (2012-2014), winning two of those finals (2012, 2014) and a Memorial Cup as the Canadian Hockey League (CHL) Champions in 2014.

“(Edmonton) is a really good organization and I know it’s going to be tough to crack a roster spot,” he said. “Expectation-wise, I think they want me to continue what I have been doing all year.”

Edmonton is an ideal fit for the 15-year-old, as he will play just a few hours north of his hometown and compete in the WHL’s Central Division amongst teams such as the Calgary Hitmen, Red Deer Rebels, Medicine Hat Tigers and Lethbridge Hurricanes.

As a Bantam Draftee this year, not granted exceptional status by the CHL, the forward will not be eligible to crack the Oil Kings roster for the 2017-18 season, but will be allowed to play five games with the team that drafted him on a call-up basis.

Although he can’t make the team out of camp, Neighbours will be taking part in summer and pre-season camps, looking to make an impact on his new team and reaffirm why Edmonton took him fourth overall in the draft.

“I definitely want to go out there to prove who I am and why they took me so high,” Neighbours said. “I’m ready to show up there and show them everything they’re looking for out of me.”

The Pursuit of Excellence bantam prep team had a hugely successful 2016-17 season, winning a Canadian Sport School Hockey League championship and having 12 players, including Neighbours, selected in the most recent WHL Bantam Draft.