An Airdrie figure skater has been recognized as the 2010 Female Athlete of the Year for Special Olympics Alberta.
Nov 5, 2010 12:00 AM By: Airdrie Today Staff 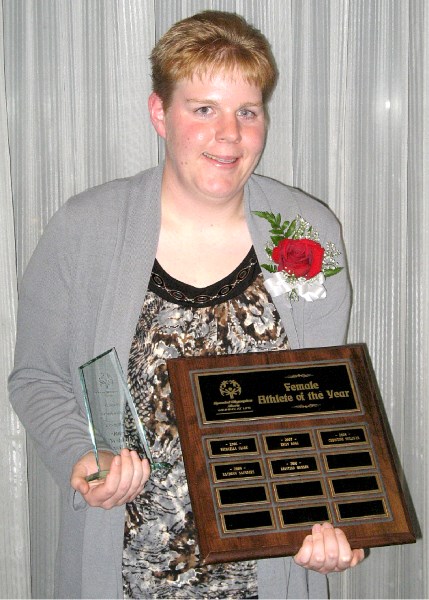 Airdrie&#8217;s Kristina Hansen poses with her 2010 Female Athlete of the Year for Special Olympics Alberta, which she won on Oct. 16.

An Airdrie figure skater has been recognized as the 2010 Female Athlete of the Year for Special Olympics Alberta.

Kristina Hansen, a member of the StarSkate figure skating program with the Airdrie Skating Club, received the award at a ceremony in Calgary on Oct. 16. Earlier this year, she was also chosen as Special Olympics Calgary Athlete of the Year out of more than 700 athletes involved with the organization.

“The awards she has been presented with are a huge honour for Kristina,” said Tracy Jaman, administrator with the Airdrie Skating Club.

“The coaches and skaters of the Airdrie Skating Club are so proud of her accomplishments and her amazing achievements with Special Olympics Calgary.”

The nomination criteria for the Athlete of the Year award includes showing respect for fellow teammates, coaches and officials, showing commitment by attending practices regularly, giving 100 per cent effort at practice and competition and exhibiting sportsmanship and the true spirit of Special Olympics.

“Kristina is a leader amongst her peers and is considered a mentor for many younger athletes,” Jaman said.

“She always tries to make everyone in her programs feel welcome, and it’s very clear just how passionate she is about her sports. Just recently, Kristina was commended for helping a new member of Special Olympics to feel more comfortable.

“Kristina took it upon herself to introduce the new member to other athletes, coaches and volunteers – just to make sure she felt welcome. She is an excellent ambassador for Special Olympics and is a kind-hearted person to everyone she meets.”