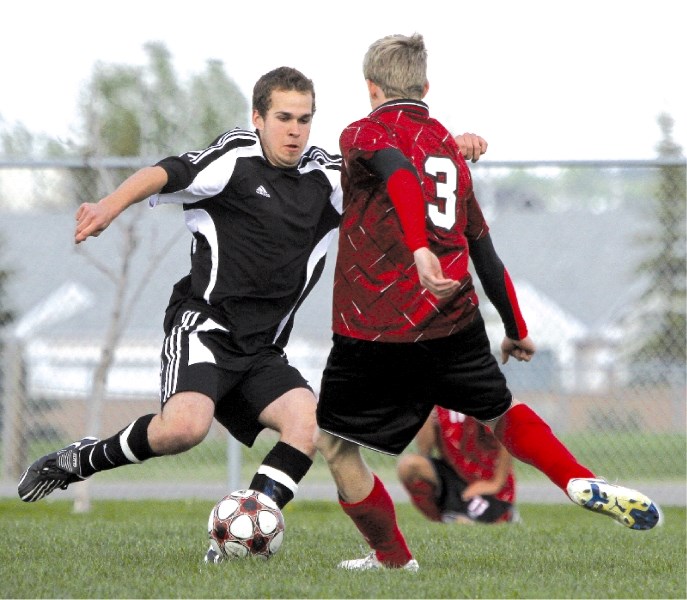 The Chestermere Lakers proved it with a 3-2 win over the George McDougall Mustangs in the gold medal game of the Rocky View Sports Association varsity boys soccer playoffs at Monklands Park, June 1.

The win also sealed an undefeated 5W-0L-1T season for the Lakers.

“It’s the first time for Chestermere to win a soccer banner, so our school will be pretty impressed and pretty happy with that,” said Lakers head coach Mike Iwasiw. “The boys were great this year, they were out in the snow in March and played all the way through. It was a great way to finish up the undefeated season for us.”

Omar Hill led the way with two goals for the Lakers, while Mohammed Hammoud scored what became the game-winner. Brandon Harrison made several key saves in goal for Chestermere throughout the game, but none more important or impressive than a diving stop in second half added time.

“Harrison played incredible at the back end for us, diving left and right to make saves,” Iwasiw said. “I think George Mac may have had a few more chances on us, but luckily we were able to finish more of ours.”

“He made one where he dove and it was just an amazing save,” added Mustangs head coach Brian DeGiuseppe.

“He played a great game, although there were times where I think we could have missed him, rather than shoot it at him. He kept them in at the end for sure.”

George McDougall, who beat the Bert Church Chargers 4-3 on May 25 to advance to the final, opened the scoring in the sixth minute when a Lakers defender erroneously headed the ball into his own net, with the Mustangs’ Chris Burton earning credit. Hill then scored for the Lakers in the 35th minute, to tie the game 1-1, after Mustangs’ goalie Nash Hayward came off his line to challenge the play.

In the 62nd minute, Hill then put the Lakers ahead 2-1, after Hayward bobbled the initial shot and let the ball roll loose.

“We’ve always told our team to always be ready for a good chance, and if it’s a bobble make sure to put it in,” Iwasiw said.

Hammoud scored in the 72nd minute to stretch the lead to 3-1, but George McDougall answered back on a pretty passing play from Matt Wagner to Andrew James in the 79th minute. However the Mustangs couldn’t solve Harrison again in the final 10 minutes.

“The boys did good this season after losing a lot of players last year – better than we expected,” said Nate Winslow, the Mustangs’ Grade 12 striker who played his final high school game. “In the game, (losing) gets to you, but after you just have to leave it on the field.”

“I definitely think we played a really good game, and dominated play for a good chunk of the game, but we just couldn’t capitalize,” DeGiuseppe said. “I think at the start of the season, we were a little unsure of where we would finish, people were doubting whether we had the team, and I’d like the players to come away with their heads high. I think they did George Mac proud.”