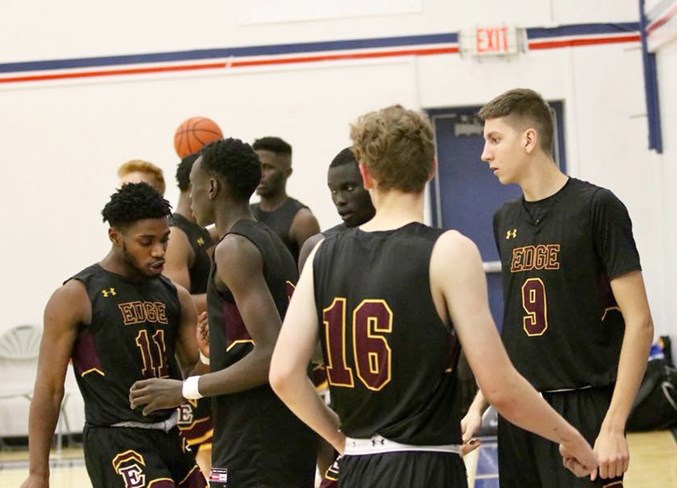 The Edge School’s varsity prep basketball team has finally tasted defeat. After opening its inaugural season in the National Preparatory Association (NPA) with four straight wins, the Edge lost three of its four games during the NPA’s central session, held Nov. 29 to Dec. 2 in Ottawa. The private school's varsity team started its schedule in Canada’s capital on a positive note Nov. 29, defeating Halifax Prep 79-62 to secure its fifth straight victory. But the team struggled for the remainder of the trip, losing 93-85 to Rothesay Netherwood before falling 99-76 to GTA Prep and 92-64 to Crestwood Prep College. The Edge’s head coach, Adam Huffman, said his players failed to work as an effective team during those games. “We really struggled sharing the ball and having guys try to do just a little bit too much,” he said. “Once they settle in and trust their teammates a little more, I think we’re going to be a contender.” Prior to the trip, the Edge had only competed against other western conference teams. Since starting up two years ago, the NPA has been dominated by teams from Ontario. Huffman said playing against some of the league’s top teams from Ontario and the East Coast was a valuable learning experience. “It was good for them to see the NPA level and see the talent that is out there,” he said. “It was an eye-opener, and it showed we’re a new program and a new team.” With the losses, the Edge now boasts a 5-3 record in league play. The .600 win percentage means the team still leads the western conference, over the Saskatoon Basketball Academy (4-4). The Edge’s NPA schedule will be on a hiatus until February 2019, when the Springbank-based private school hosts the western session from Feb. 7 to 11. However, the team's players will be kept busy in the interim – according to Huffman, the Edge is competing in the Jerry Tarkanian Classic, held Dec. 18 to 21 in Las Vegas. The annual tournament is named after the late Jerry Tarkanian – a former collegiate basketball coach of nearly 40 years – and will include some of the top prep basketball teams from across North America. “Right now, everyone in Canada is jealous of the fact we’re in this tournament,” Huffman said, adding the team’s first game will be against Findlay Prep ­– one of the top prep basketball programs in the United States. “They have guys going to the NBA, multiple guys committed to Division 1 (NCAA) teams already," he said. Huffman said the Tarkanian Classic will provide his players with further opportunities to impress coaches at NCAA programs in the U.S. “There will be Div. 1 coaches everywhere watching,” he said. “They’ll be courtside.”