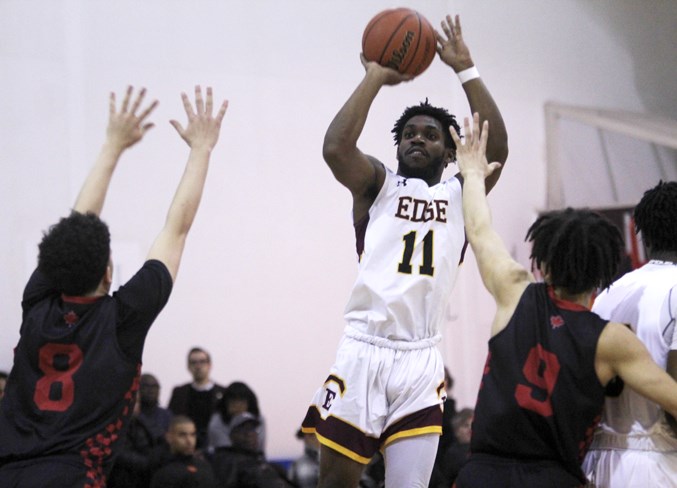 The Edge Mountaineers concluded the 2018-19 season in second place of the NPA.

Defying all odds and exceeding expectations for a first-year program, the Edge School’s prep basketball team earned a spot in the 2019 National Preparatory Association’s (NPA) championship game, held March 23 in Brampton, Ont. The Springbank-based private school’s Cinderella run in its debut season ended just short of the finish line when the Mountaineers fell 97-83 to Toronto-based Crestwood Preparatory College. “Obviously, we were disappointed to lose our final game of the season, but ultimately, I’m pretty proud of how far we came in such a short amount of time,” said the Edge’s head coach, Adam Huffman. “Ultimately, I felt the league is a winnable league, based on the effort we put in. I felt we do it right and we have the chance to win this league [in the future].” While the weekend ended in disappointment, the highlight of the Edge’s showing at the NPA’s national tournament was the team’s comeback victory over the Canada Top Flight Academy (CTA) in the semi-final March 22. Despite trailing for most of the fixture, the Mountaineers ended the game with a Hollywood-style finish to defeat the Ottawa-based team 86-80. CTA was the favourite to win the NPA, entering the tournament with an unbeaten 12-0 record and having won the league championship in 2017 and 2018. “That was huge,” said Edge guard Adefolarin “Fofo” Adetogun, the team’s leading scorer this season. “For me, personally, that was the first time I’ve been able to beat that team in the three years I’ve been in the league. [CTA is] a really great program, really well-polished with a really good coach.” The Mountaineers’ Herculean effort in the semi-final may have taken too much out of the team for the ensuing final – plenty of the Edge’s players were battered and bruised for the championship game against Crestwood. “We were barely standing after the CTA game,” Huffman said. “[Adetogun], for example, was in an air cast for three weeks leading into nationals with a [stress] fracture in his shin. “He risked it to play, because he wanted to finish the season strong…and wanted to show well for scouts and coaches who were there to watch him.” Crestwood took advantage of the Edge’s weaker-than-usual shooting in the championship game to post a commanding 49-31 lead by half time. Staring defeat in the face, the Edge came out with more energy in the second half, starting the third quarter on a nine-point run. With adrenaline pumping through the players’ veins, the Mountaineers came within seven points of Crestwood. But another movie-inspired comeback was not in the cards – Crestwood’s steady shooting and rebounding prowess pushed the Ontarians to a 14-point win, and the program’s first-ever NPA championship. “For what we did, we definitely could have won that game,” Adetogun said. “It was just tough in that moment. We had a lot of guys who were beat up and it was hard to play in that environment – especially being in Toronto, where [Crestwood] had the entire crowd backing them.” The Mountaineers’ 2-1 showing at the national tournament means the team concluded its inaugural season in the NPA with a 10-5 record. While most first-year programs struggle in the highly competitive prep league, Huffman said, Edge School’s ability to hold its own against Canada’s best high-school basketball teams proved an outlier. “Although we’re a first-year team in the league, there’s a lot of experience in this program,” said Huffman, a University of Regina Cougars basketball alumnus and former coach of Saskatchewan’s U15 team, as well as the previous coach of the NPA’s Notre Dame Hounds. “It’s what Edge School offers these kids from an infrastructure standpoint, what these kids are able to do [and] the amount of access they have – the weight room, the sports psychology, the yoga.” According to Huffman, the Edge’s first year in the NPA made plenty of noise in Canadian basketball, and has garnered interest from high-level players from across North America. “The phones are already ringing from kids who want to come to Edge, from as far away as Montana, Winnipeg, Saskatchewan [and] British Columbia,” he said. “We even have kids from Toronto reaching out.” While a handful of key players will graduate and make the step to collegiate basketball next year – including Adetogun, Briekie Davis and Manyang Tong – Huffman said he expects the Mountaineers to put forward another strong team for 2019-20. “I believe we’re going to be the destination for prep basketball in Western Canada for years to come,” he said.