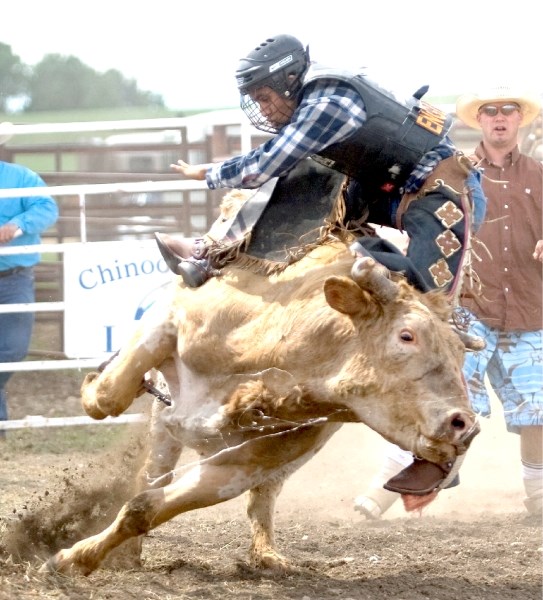 The 2010 installment of Crossfield’s Pete Knight Days begins on June 18, and there is more to do in town than just the rodeo.

All the best cowboys and cowgirls of the Foothills Cowboys Association (FCA) will be competing both June 18 and 19, with full rodeo performances both days starting at 7 p.m. and 1 p.m.

Rodeo slack will be held at 3:30 p.m. on June 18, with more than 100 competitors expected in the timed events.

The Pete Knight Days Parade starts at 11 a.m. on June 19, after the Agricultural Society’s pancake breakfast at the arena from 8 a.m. until 10 a.m.

Ida Rowat, parade organizer, says the great response to the event last year prompted the organizers to set up 11 categories for floats and displays, with the theme of Rooted in Tradition, Growing with the Future.

“The idea around the theme is that Crossfield is a growing community, but one thing that hasn’t changed much is the rodeo,” said Rowat. “Last year, we had a lot of floats that came in and we didn’t know where to put them. This year, we decided to add the miscellaneous category.”

The parade is one of the few that still provides candy for children.

“For the kids in Crossfield, it is just a tradition to bring a bag, it’s like Halloween really,” said Rowat. “From a safety perspective, we prefer that the candy is handed out by someone on the edge of the crowd. We haven’t had any issues at all with the candy.”

Once the parade wraps up, people are encouraged to come to the rodeo grounds for the second day of FCA competition.

During the intermission, the return of the popular mutton bustin’ event will provide the crowds with some of the cutest entertainment rodeo offers, along with trick riders and even Harold Girletz’s Talking Horse.

“We have a lot of young kids who are still involved in rodeo,” said Pete Knight Rodeo president Pat Simpson.

Simpson says it is important to come out to your local rodeo, because without the support, the event would not be possible.

“If we don’t support it, we will lose it. Pete Knight Days is the weekend for Crossfield,” said Simpson. “It’s been really good the last few years, people have been coming out to support the event.”

One thing the organizers added to the schedule is the demolition derby that will take place immediately after the rodeo on June 19.

Simpson says the event is nearly full with 40 cars entered.

A dance will be held both nights at the rodeo grounds, starting at 9 p.m. with music provided by Kixxsin on June 18 and Durango Ridge on June 19.

Downtown will be awash with activity on June 20, with the Crossfield Show and Shine taking place on Railway Ave. from noon until 4 p.m.

Admission for the rodeo is $10 for anyone 12 and over and includes all of the activities taking place at the rodeo grounds that day.

For a full schedule of events, or to enter into the parade, rodeo or demolition derby, visit www.peteknightdays.com