The Cochrane A Cobras would have preferred gold, but the team is more than happy with ending its season on a winning note and claiming bronze.
Jun 4, 2010 12:00 AM By: Airdrie Today Staff 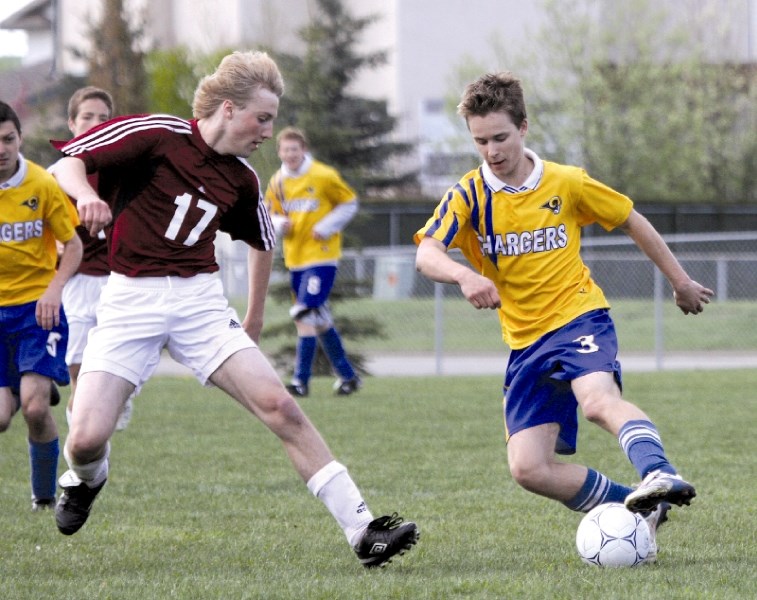 The Cochrane A Cobras would have preferred gold, but the team is more than happy with ending its season on a winning note and claiming bronze.

The Cobras took advantage of its bounces to claim third place in the Rocky View Sports Association varsity boys soccer playoffs with a 4-2 win over the Bert Church Chargers at Monkland Park, June 1.

“Our problem this year has been a lack of scoring, so having a game where we score four goals is a really nice way to finish off the season,” said Cobras coach Carolyn McLeod. “And four different guys scoring, on assist from four other different guys.”

Cochrane opened the scoring on a Ryan Hood goal in the 20th minute.

“We got a quick bounce in their end, it was a bit of a turnover and we scored, and that kind of set our momentum,” McLeod said. “Our boys – when they’re up they’re up but they can get down and that’s been the story of our season. But they got up, got the momentum and carried it.”

Bert Church tied the game early in the second half on a goal by Nick Cupeli in the 50th minute. The Cobras took the lead back in the 71st minute on a goal by Travis Chace, then went up 3-1 on a Zach Kerr shot two minutes later.

Joel Holmes of Bert Church responded in the 82nd minute, but the Cobras’ put the game out of reach on Vini Rescend’s goal in the 86th minute.

The Chargers, who beat the Cobras 2-1 earlier in the season, carried the play for much of the game but hit the woodwork with five shots. They also couldn’t solve Cobras’ keeper Jared Magee, who made several big saves to preserve the Cobras’ lead late in the second half.

“It was a really close game and I thought both teams played really well,” said Chargers head coach Barry Anderson. “I thought we controlled the play. We moved the ball and had a lot of possession, but we just couldn’t find the back of the net again.”

“The game could’ve switched if they had put in a couple of their posts,” McLeod said. “But our boys played well and finally put the ball in the net. In a way it is kind of better to win for bronze than lose for silver.”