Three Airdrie archers will get the opportunity to represent their city at the 2018 Alberta Winter Games this February after qualifying for the Zone 2 and 3 merge team.
Jan 25, 2018 12:00 AM By: Airdrie City View 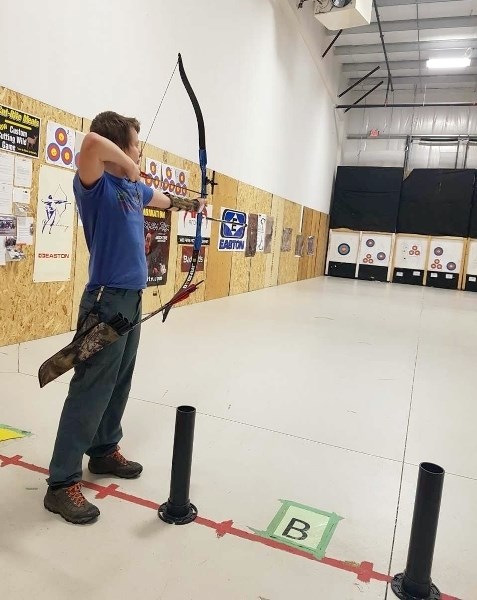 Dawson Molitor is one of three Airdronians that will be competing in archery at the Alberta Winter Games in Wood Buffalo this February.

Three Airdrie archers will get the opportunity to represent their city at the 2018 Alberta Winter Games this February after qualifying for the Zone 2 and 3 merge team.

Fourteen-year-olds Dawson Molitor, Haley Priest and Nick Fogg will be taking part in individual events, as well as competing as a team, to try and bring home some hardware for Zone 2 – Big Country.

Zone 3 head coach Lindsay Struthers said although she hasn’t had much time to work with the young Airdrie trio yet, she has high expectations for the Zone 2 and 3 teams.

“Zones 2 and 3 generally do very well with medals…. Everybody looks to us because we do have a history of doing really well,” Struthers said. “Not only in medaling, but also being good sportsmen.”

Struthers added the rigorous three-day competition will be trying for the young athletes, as they are set to shoot more arrows and deal with more pressure during a longer period of time, but added the athletes from the other zones will be going through just as difficult of an experience.

“They will be shooting at least 500 arrows over the course of three days,” Struthers said. “Normally we wouldn’t be doing quite this much, but to give the kids the chance to shoot individual and team events on the last day has been awesome because that closely mirrors what they do at the Olympics.

“The thing to consider is we’re taking the kids out of their comfort zones completely. It’s going to be more of an endurance game by the end of it than a skill game.”

At the individual level Molitor will compete in the Male Cub Recurve competition, while Fogg and Priest will be shooting in the Cub Compound events.

In addition to the individual events, Fogg and Priest will be paired up to compete in the Compound Mixed Team event.

Although the Zone 2 and 3 teams have trained together in preparation of the event, they may have to face off against one another throughout the Alberta Winter Games, which is something Struthers said she has prepared the teams for.

“We just talk to the athletes and say it’s all about earning the spot and fighting to the bitter end,” Struthers said. “It doesn’t matter that you’re shooting against each other, you can still be friends and compete against each another.

“The important thing is to make each other work for it.”

Even though her time with the Airdrie trio has been limited, Struthers has had positive critique of the three 14-year-olds. In particular Fogg’s attitude and ability to shoot, and Molitor’s eagerness to join Calgary’s junior program to get more experience. Struthers added she’s excited to work with Priest after seeing her shoot at team trials.