Pandemic impact Several sports teams and leagues in Airdrie faced unprecedented disruptions due to the COVID-19 pandemic. The early days of the pandemic saw mass cancellations of a number of sports impacting local teams.
Dec 30, 2020 4:00 PM By: Airdrie Today Staff
Previous Next
COVID-19 forced local teams in a variety of sports to cancel games and suspend seasons in 2020. File Photo/Airdrie City View
Expand

Several sports teams and leagues in Airdrie faced unprecedented disruptions due to the COVID-19 pandemic.

The early days of the pandemic saw mass cancellations of many sports, impacting local teams. In March, games, tournaments and other events for local hockey, ringette, swim and high school sports teams were suddenly cancelled and seasons were abruptly halted.

With the cancelled seasons came financial losses for local clubs. After the Alberta Lacrosse Association announced the 2020 box lacrosse season would be cancelled, the RockyView Lacrosse Association approved an updated budget with a $71,000 deficit, partly due to lost registration and tryout fees. Meanwhile, the Airdrie and District Soccer Association claimed the cancellation of the outdoor season would reduce its yearly revenue by approximately 50 per cent.

As the year progressed, uncertainty remained about whether sports could return. With relaxed health restrictions, modified competition in sports like baseball, football, curling, ringette and hockey were able to be held in the summer and fall. However, local middle- and high-school teams were restricted to practices and inter-squad games – all inter-school competition was suspended.

Athletes were dealt a second blow when sports were restricted once again Nov. 12 to combat increasing cases of COVID-19 in Alberta. 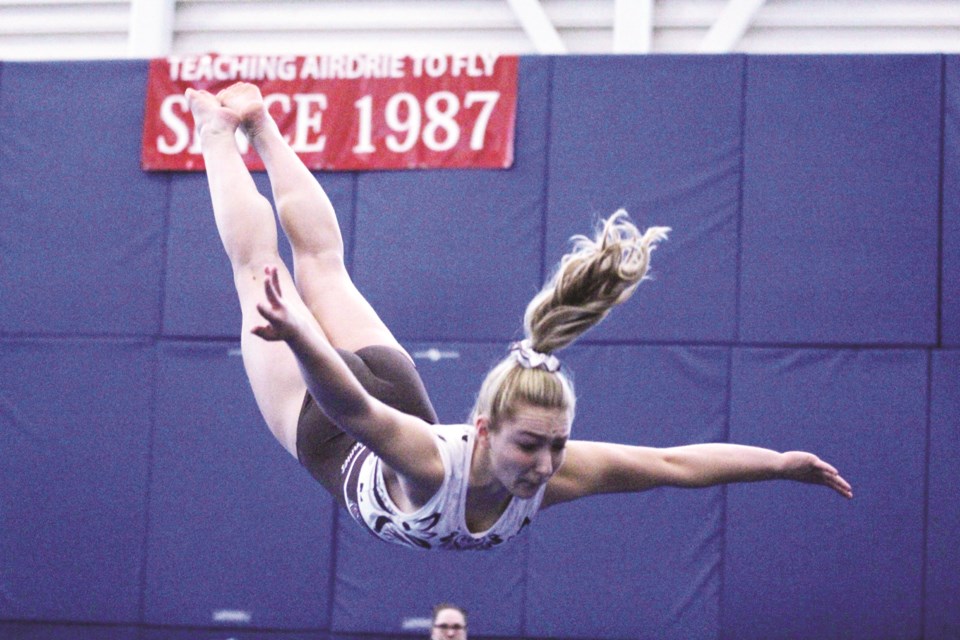 Katey Lowther was among Airdrie's athletes competing on home soil at the 2020 Alberta Winter Games in February. She garnered a sixth-place showing in the JO7 artistic gymnastics competition.

Airdrie hosted the 2020 Alberta Winter Games from Feb. 14 to 17, with thousands of Alberta's athletes and coaches flooding to the city for a full slate of youth sports events.

“The success of these games…rests with the host city, games organizers and volunteers,” Leela Aheer, Minister of Culture, Multiculturalism and Status of Women, said in a statement. “Through their warmth and hospitality, they certainly set the bar high for these games.”

Several local athletes earned spots on the podium, including judo athlete DJ Roberts, archer Haley Priest and fencer Gresa Jasari, who each won a gold medal during the weekend. Airdronians contributed to 15 medals during the Games, including four gold, seven silver and eight bronze.

Zone 3 (Calgary) finished the weekend at the top of the medal standings, while Zone 2 (Big Country) – which included most of Airdrie’s athletes – followed in second.

An Airdrie Aces alumnus enjoyed some impressive accomplishments in 2020 and was named the University of Lethbridge Pronghorn’s Male Athlete of the Year.

Andreas Troschke, a hammer throw and weight throw specialist, nabbed the university’s top athlete honour after taking home medals from both the Canada West championships in February and the USPORTS national championships in early March. The 21-year-old throws athlete earned his first Canada West crown in the weight throw with a top distance of 17.47 metres (m), before bettering it by 0.19 m two weeks later to earn bronze at nationals.

With medals in four of his five meets during the 2019-20 university track season, Troschke said his third year was the most consistent of his track and field career. The Olds native attributed his improved consistency to increased experience and confidence.

According to Athletics Canada, Troschke is currently ranked second in Canada among U23 male athletes in the weight throw. Now in his fourth year of university, he said his objective is to win gold in the event at nationals – something he last achieved during his freshman campaign. 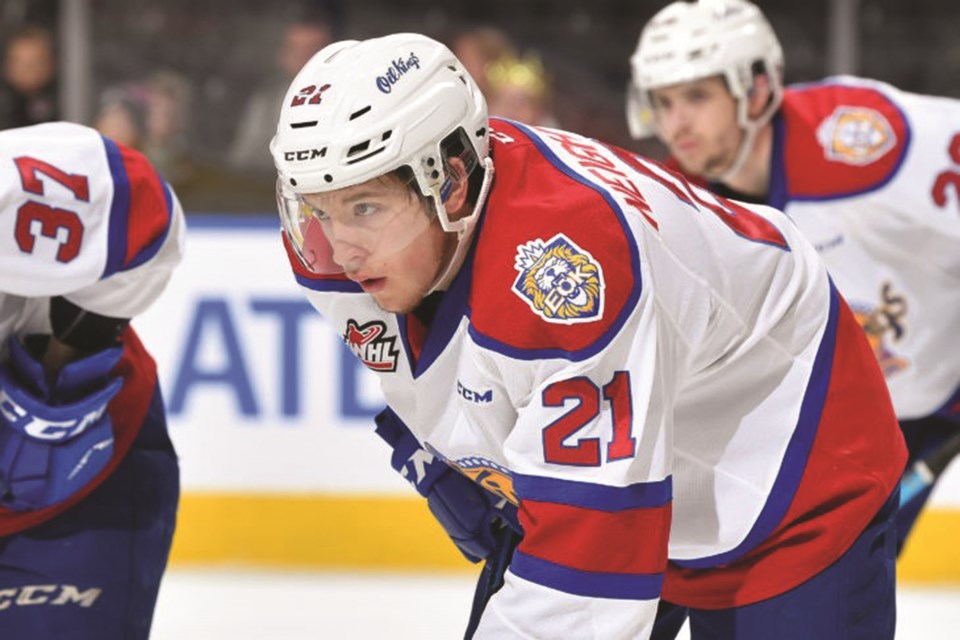 Airdrie's Jake Neighbours was selected by the St. Louis Blues in the first round of the 2020 NHL Draft in October. File Photo/Airdrie City View

Airdrie hockey product Jake Neighbours fulfilled a lifelong dream in 2020 when he was selected in the first round of the NHL Draft.

On Oct. 6, the St. Louis Blues selected the Edmonton Oil Kings forward as the draft’s 26th pick. The former Airdrie Xtreme player said he is excited to eventually join the 2019 Stanley Cup champions.

"They have a really good organization and it seems like they have a great staff," the 18-year-old said. "I can't wait to meet them in person and get to know them. It's the same with the players. They're outstanding hockey players and I'm sure they're great guys as well, so I'm looking forward to getting out there."

While the 2019-20 Western Hockey League post-season was called off due to the COVID-19 pandemic, Neighbours made a positive impression before the major junior league’s shutdown. As a forward for the Oil Kings, he averaged more than a point per game in 2019-20, tallying 23 goals and 47 assists in 64 outings.

Now a third-year player with the Oil Kings, Neighbours is looking forward to the resumption of competitive hockey, and the chance to challenge for a WHL title. 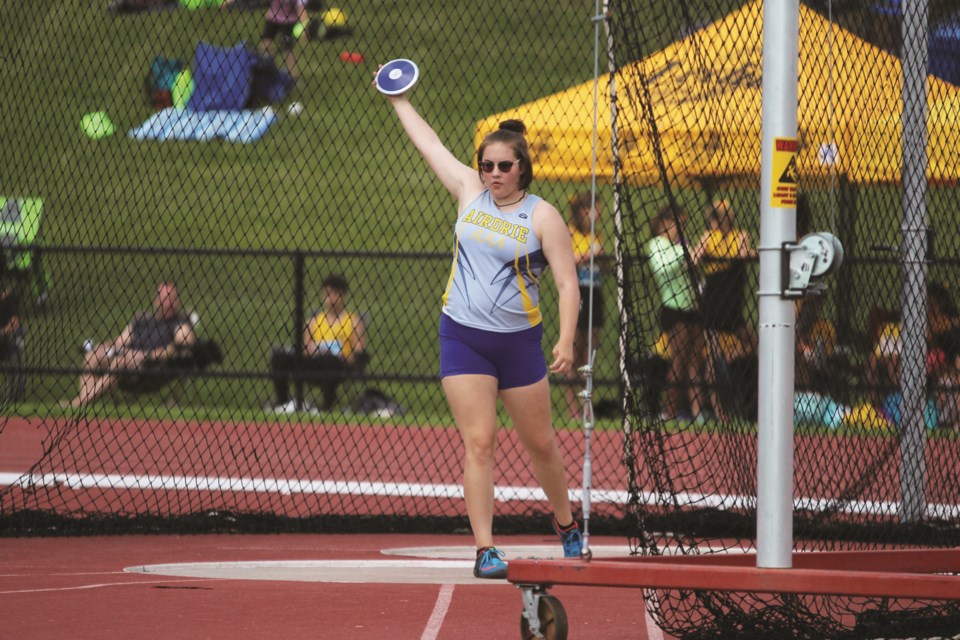 The sky continues to seem the limit for Airdrie throws athlete Jinaye Shomachuk.

The year started on a positive note for the Bert Church High School student-athlete. In February, she earned the silver medal in the weight throw event at the 2020 Simplot Games, in Idaho – one of North America’s premier track and field competitions for high-school-aged athletes. She also finished fifth in the shot put.

Now in her last year of high school, Shomachuk is on the recruitment radar for coaches of both USPORTS and NCAA track and field programs. She said she intends to attend a university that allows her to balance her track and academic goals. 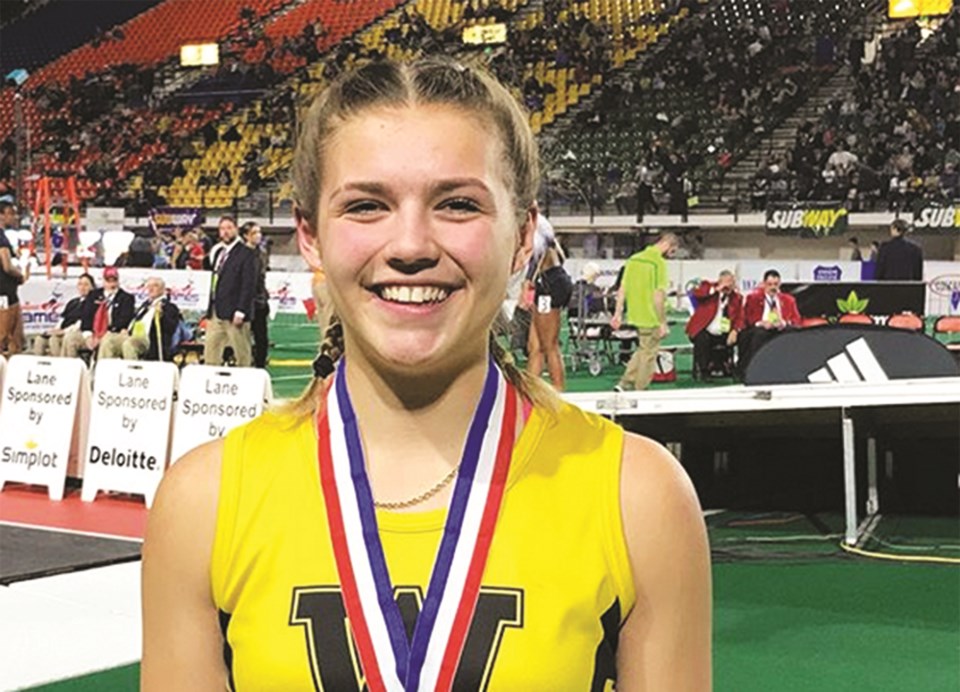 Airdrie heptathlete Sienna MacDonald earned the city’s second-ever gold medal from the Simplot Games in 2020. The annual indoor meet, held each February, boasts some of the top young track athletes from the United States, Canada and even New Zealand and Australia.

Competing at Idaho State University, the 17-year-old multi-event specialist raced to a gold-medal finish in the women’s 60-m hurdles, enjoying a PB time of 8.7 seconds in the final. MacDonald also competed in the 4x200-m relay alongside her Calgary Warriors teammates and finished seventh.

2020 also saw MacDonald graduate from George MacDougall High School. While she did not get to defend her provincial crown for the Mustangs in her final high-school track season due to the pandemic, she managed to attract the attention of the University of Calgary Dinos track and field team, whom she committed to in the spring.

According to MacDonald, the deciding factor in opting to stay close to home for her university track career was the opportunity to train under Dinos' coach Les Gramantik – a veteran coach with more than 45 years of experience.

Besides coaching the Zone 2 U16AA Blaze ringette team to a provincial U16AA championship in March, Laurie Reeve (back row, second from right) was also named Alberta Ringette's Coach of the Year for the 2019-20 season. File Photo/Airdrie City View

Unfortunately, Reeve’s players did not get to test their mettle against opponents from other provinces, as the national ringette championships were cancelled due to the COVID-19 pandemic.

Another highlight of Reeve’s year was the opportunity to coach the Zone 2 (Big Country) team at the 2020 Alberta Winter Games. Reeve’s team, which included her daughters Abygale and Alex, skated to a podium finish, picking up the bronze medal on home ice.

According to Reeve, she was shocked but pleased to learn she had won the provincial coach of the year honour. She said her goal is to make ringette fun while maintaining an athlete-centred approach that helps her players grow as people, as well as competitors.

“It’s not just about the game, but also helping them with things like emotional and psychological aspects of the game – developing the whole person,” she said. 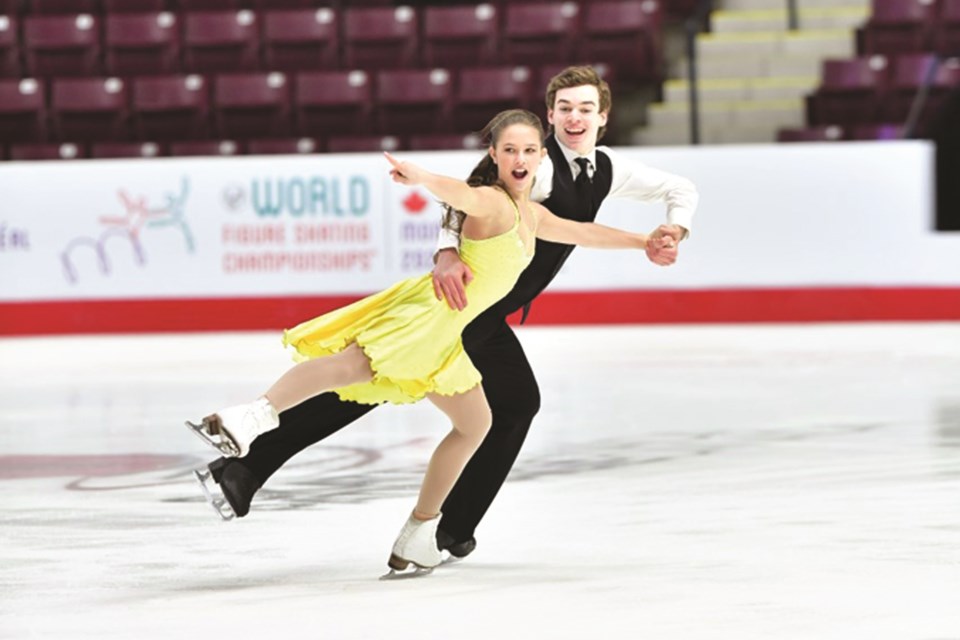 In January, local figure skater Savanna Martel held her own against the best in the country when she placed eighth at Skate Canada’s 2020 Canadian Tire National Skating Championships in Mississauga, Ont.

Martel – a Grade 10 student at W.H. Croxford – said she and her skating partner Kobi Chant of Olds were relatively pleased with their showing, although they had been aiming for a higher placement.

“At the qualifiers for nationals we got sixth and we were hoping to [make the top five] at nationals, so we weren’t extremely happy with it,” she said. “But it was really good for our first time – there were positives and negatives.”

Martel and Chant earned 86.92 overall points across their three programs, which included a starlight waltz, quickstep and free dance. The starlight waltz was their best program at the competition, where they finished with 15.51 points – the sixth-highest score among the 15 competing pairs. 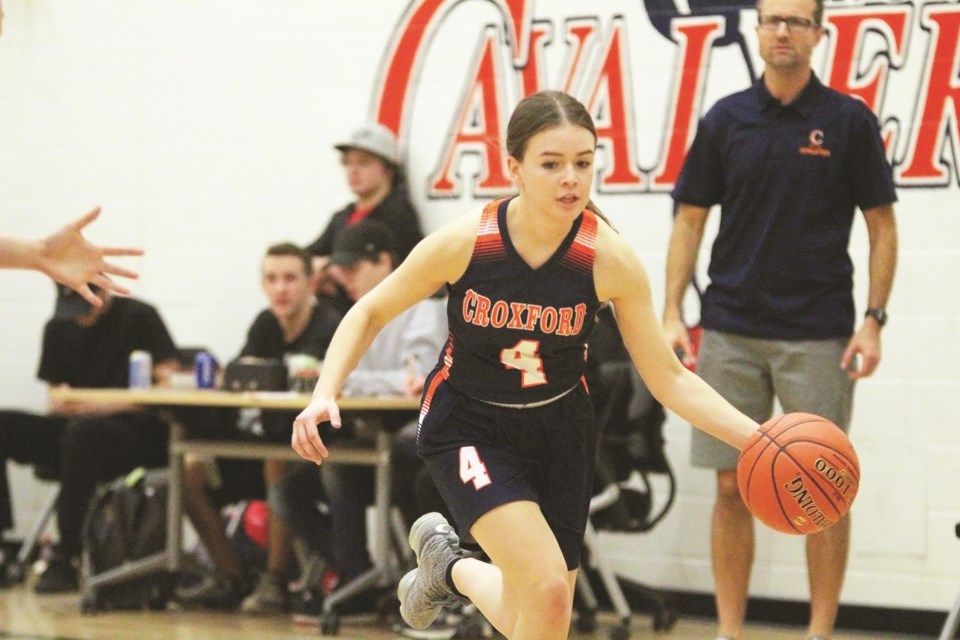 “There was screaming, loud cheering, tears – it was really cool,” said Cavaliers coach Taylor Grant following the victory. “The players really supported each other on the bench. When the players weren’t on the court, they were really loud. We had a huge fan base at the game – there were a lot of people there to support Croxford.”

The Cavaliers had entered the post-season as the second seed behind the Bobcats, after putting up a 5-1 record in the regular season.

Normally, winning the RVSA championship would have guaranteed the Cavaliers a spot in the South Central Zones 3A tournament – which serves as a qualifier for the Alberta Schools Athletic Association (ASAA) 3A provincial championships – but the team was robbed of the opportunity when the pandemic led the ASAA to postpone all provincial high school basketball championships indefinitely. 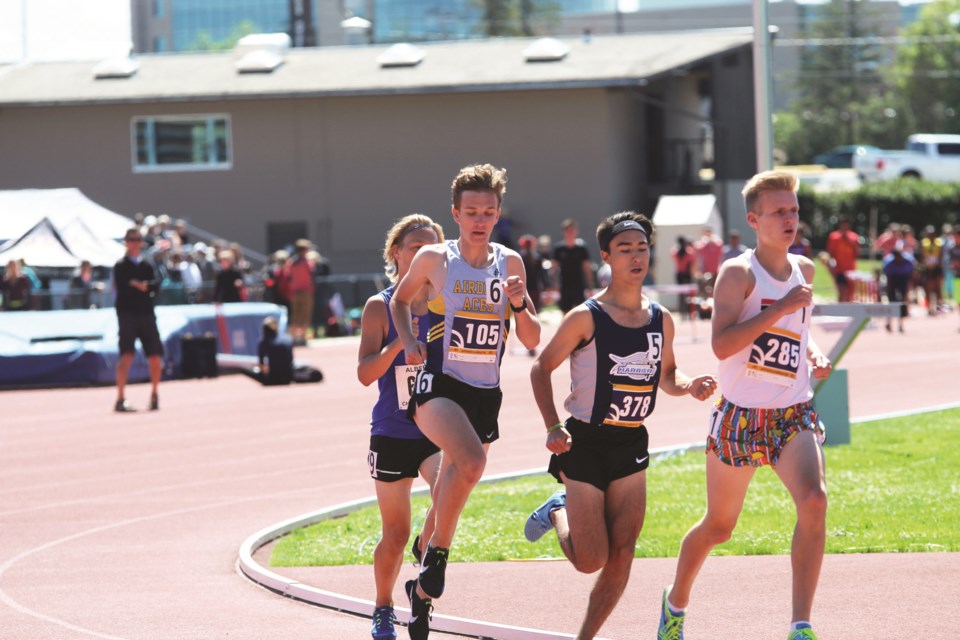 Runners will no longer represent the Airdrie Aces Athletics Club after it disbanded due to financial hardships caused by the pandemic. File Photo/Airdrie City View

After a decade of operating in the city, the Airdrie Aces Athletics Club dissolved this year.

According to founder and president Jodie Matsuba-Szucs, the track and field club was unable to weather financial difficulties brought on by the COVID-19 pandemic.

“It’s been tough to come to this decision, but we really had no choice,” she said in September. “Everyone’s focus has changed and everyone is just trying to survive right now.”

Throughout the course of the year, the cancellation of important fundraisers like a casino night and the Airdrie Mayor’s Run placed the club in financial jeopardy. A forecasted drop in member registrations sealed the club’s fate, Matsuba-Szucs said.

Many families decided not to enroll their children in the club’s program this year, she added, either because of fears about the virus, uncertainty surrounding the ability to compete in the indoor track season or financial pressures.

While club members were disappointed by the dissolution, Matsuba-Szucs said its most competitive athletes were able to stay in the sport by joining track clubs in Calgary. Others may still train and compete in future meets as “unattached” athletes.