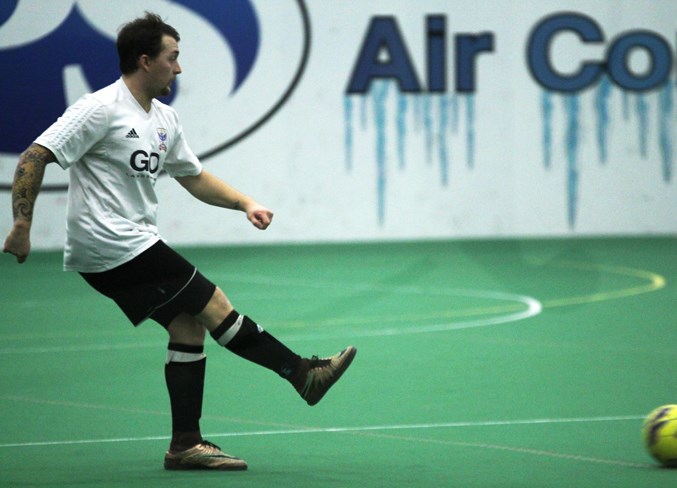 Airdrie United 1 rounded off its indoor season with a fourth-place showing at the 2019 Tier 3 men&#8217;s provincial championships March 22 to 24 in Edmonton.

After a successful regular season, the Airdrie United 1 men’s soccer team’s 2018-19 indoor campaign came to an end March 22 to 24 at the Tier 3 men’s provincial championships in Edmonton. Playing without starting goalkeeper David Miguezorellana, who missed the tournament due to personal reasons, the team's weekend in Alberta’s capital saw the squad finish in fourth place after winning one of its three matches. “Getting fourth was a good thing, but I think we probably could have done better,” said midfielder Phil Austin. “But we were also down a few guys, so, for what we had, we did pretty good.” The weekend got off to a great start for Airdrie March 22, with a 4-3 win over the Colombia Concrete Brothers of Edmonton. Goals for United 1 came from Austin, Derek Dixon, Andrew Robinson and AJ Enns. Considering the Colombia Concrete Brothers went on to win the tournament, Airdrie coach Tyler Grandan said the result was a testament to the strength of Airdrie’s grit. “We just stuck in there, changed our tactics, and everyone put everything out there,” he said. “We just never gave up, despite not having our starting goalie and being short of players. Everyone came together.” Airdrie was unable to recreate the successful result the following day, losing 2-1 to Edmonton-based Gladiators FC. The loss meant United 1 had to vie for the bronze medal March 24, against CFC United of Calgary. Dixon picked up his second goal of the tournament against CFC United, while Colin Reynolds and Sean Forrest also made it onto the score sheet. The match ended 4-4, meaning the bronze medal had to be decided by a penalty shootout. Unfortunately for United 1, the shootout against the Calgary team ended in defeat. “Our goalie tried his best, but everyone was spent and a little deflated from the previous night’s loss,” Grandan said. “We put everything we could into it and tried to give our stand-in goalie – who is not usually a goalie – a fair shot.” While the weekend ultimately ended in disappointment for for the team, Austin said 2018-19 was still a successful indoor campaign. Airdrie finished the regular season in first place of Division 3A in the Calgary United Soccer Association, and the team’s 14-4-0 record earned it a promotion to Division 2 for next winter. “Getting to provincials was just gravy,” Austin said. “We knew that came with [achieving] our other goals, but once we got there, everything that happened was good, whether it was losses or wins.” According to Grandan, tryouts for Airdrie United 1 will likely take place in mid- to late-April, weather pending, at a yet-to-be-determined location. “Hopefully, everyone is now revved up for outdoor,” he said.