Three throwers from Airdrie were in top form at the 2018 Alberta Summer Games July 19 to 22 in Grande Prairie, topping the podium in multiple throwing events.
Aug 2, 2018 12:01 AM By: Scott Strasser 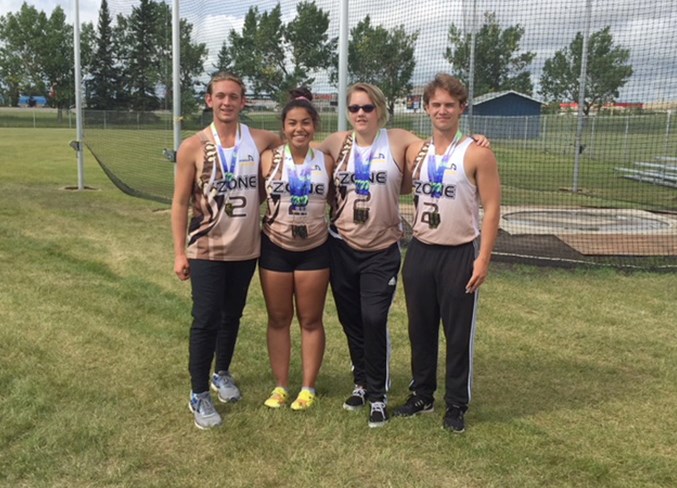 (From left to right) Nic Wroe, Haylin Eling (of Olds), Jinaye Shomachuk and Parker Allen were dominant in the throws for Zone 2 at the Alberta Summer Games.

Three throwers from Airdrie were in top form at the 2018 Alberta Summer Games July 19 to 22 in Grande Prairie, topping the podium in multiple throwing events. Representing Zone 2 (Big Country), Jinaye Shomachuk, Nick Wroe and Parker Allen all took home medals in various contests for their age groups. Of the 16 throwing events at the Games, these three members of the Airdrie Aces recorded seven medals – five of them gold – for Zone 2. “Some of them are just starting to hit their technique now and it’s starting to all come together,” said Airdrie Aces throws coach Rachel Andres. “They’ve all been working hard as a team, too, and they’re able to push each other as a team, which is really helpful.” On July 20, Shomachuk broke the Alberta Summer Games record for U16 women’s 3-kilogram (kg) hammer throw by more than eight metres (m) with a distance of 50.05 m. By breaking the 50-m barrier, the 14-year-old Bert Church High School student maintains her position as the top 3-kg hammer thrower for U16 women in Canada and U18 women in Alberta. “She’s going to be top in Canada, as long as she keeps this going,” Andres said. “She’s just started working on weights this year. By the time she gets to top of youth, she’ll probably be top of the country for the U20 age group.” Following the hammer throw event, Shomachuk continued her dominance July 20 with a first-place finish in discus. Her 34.27-m throw was nine metres further than her nearest competitor. On the U18 men’s side, 17-year-old Allen secured a gold medal for Zone 2 in javelin with a personal best of 49.41 m, while 16-year-old Wroe won first place in discus with a personal best of 41.63 m. Allen finished fifth in discus and eighth in shot put July 20, while Wroe finished fifth in javelin. The next day, Shomachuk followed up her two gold medals with a bronze in javelin, recording a throw of 29.07 m. She capped off her impressive showing for Zone 2 with her third gold of the Games – this time in the 3-kg shot put – with a throw of 11.71 m. Allen took home yet another gold medal (his second of the Games) for Big Country July 21, with a distance of 41.67 m in the men’s hammer throw. Wroe barely missed out on the podium in that event, finishing fourth with a PB of 30.60 m.