It was a mixed bag for three of Airdrie’s athletes competing at the 2019 Canada Winter Games in Red Deer last weekend, as they experienced the highs and lows of competition.
0
Feb 21, 2019 12:01 AM By: Scott Strasser 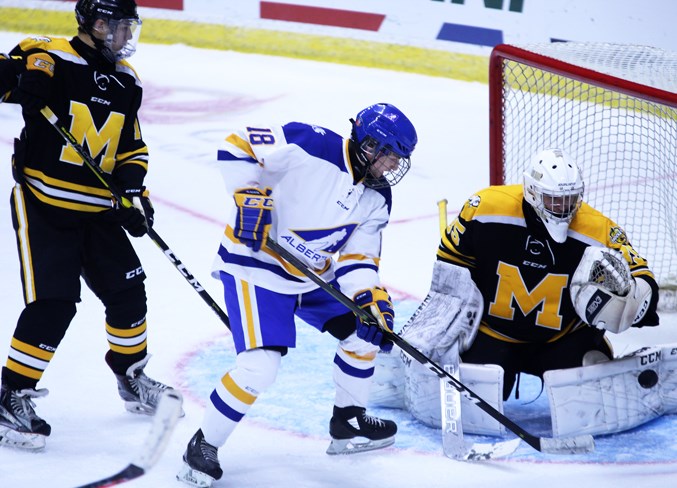 Craig Armstrong attempts to flick the puck past the Manitoba goaltender, Feb. 17. Armstrong picked up Team Alberta&#8217;s sixth goal in the 6-5 win over Manitoba, securing the host team&#8217;s first win of the 2019 Canada Winter Games.

It was a mixed bag for three of Airdrie’s athletes competing at the 2019 Canada Winter Games in Red Deer last weekend, as they experienced the highs and lows of competition. On the ice, hockey players Keagan Slaney and Craig Armstrong skated to a 2-0-1 record during the preliminary round for Team Alberta. “So far this tournament, I don’t think we’ve played to the best of our abilities,” said Armstrong, following the team’s second game. Playing at the Red Deer Rebels’ Enmax Centrium in front of more than 1,500 fans, Team Alberta opened its schedule Feb. 16 with a 4-3 overtime loss to Saskatchewan. The host team led 3-2 mid-way through the third period, but allowed Saskatchewan to tie it up with a power-play goal. The team in green continued to press offensively in overtime, scoring the winning tally two minutes in. Three of Saskatchewan’s goals came on the power play. Slaney, an Edmonton Oil Kings prospect, said Alberta let off the gas after a promising start. “We have to stay more consistent through the whole game,” he said. “Maybe a little more time to click would help us, but you don’t lose a tournament on the first day, so we’ll have some more time to build some chemistry and keep going.” The following afternoon, Alberta’s chemistry appeared better, as the team rallied to overcome Team Manitoba 6-5. While the host team came out strong to take a 6-1 lead, the Albertans faltered in the final two stanzas. Manitoba outscored Alberta in the second period 2-1, and nearly forced overtime with another strong two-goal showing in the third period. Armstrong opened his account during the Manitoba game, netting Alberta’s sixth goal, which brought the score to 6-1. It was all Manitoba after that, as the visiting team scored four in a row. Regardless of how the game played out, Armstrong, who is committed to join the Western Hockey League’s Prince George Cougars next season, said it was important for Alberta to get its first win. “We obviously didn’t make it easy on ourselves,” he said. “We probably have the most pressure on us in this tournament, because we’re on home soil, so the first win was big for us.” Alberta won its third game, as well, coming back with two late goals to beat British Columbia 5-4, Feb. 17. Differing from its first two games, Alberta started poorly, going down 3-0 before finishing strong to take the game. Armstrong scored his second goal of the tournament with Alberta’s first tally in the second period. The win ensured Alberta topped its round-robin pool and received a bye through to the quarterfinals, held Feb. 20 (after press time).

Over at the River Bend Golf Course, biathlete Thomas Hulsman’s Canada Winter Games competition kicked off Feb. 16, when he competed in the men’s 7.5-kilometre (km) race. Skiing and shooting in -20 C, Hulsman finished the race in 16th with a time of 27:28.8. According to the 19-year-old, his shooting accuracy was not as good as usual, which meant he had to complete a “penalty lap,” adding an extra 750 metres to his race. “Hitting 50 per cent is definitely not me,” he said. “The lane I decided to shoot on was not the best – the wind was spilling over the back of the range and basically breaking on my lane. My first shot missed to the left, then to the right and then to the left. Then, it was steady to the right.” The 2017 graduate of W.H. Croxford High School competed again Feb. 18 in the 10-km event – a distance he said he prefers – and finished fourth with a time of 29:26.9. Hulsman skied in just two seconds faster than fellow Albertan Reid Lovstrom. Airdrie’s other two athletes who will vie for medals in Red Deer – figure skater Savanna Martel and judo athlete Teyana Roberts – will compete during the Games’ second week, which starts Feb. 24.