A look at the Indigenous names for Edmonton's 12 wards

EDMONTON — The City of Edmonton approved a bylaw earlier this month to change the names of its 12 wards to Indigenous ones. Here are the new names and their meanings: Nakota Isga (Ward 1): (NAH'-koh-tah EE'-ska). Of Sioux origin meaning "the people.
Dec 26, 2020 10:15 AM By: Canadian Press 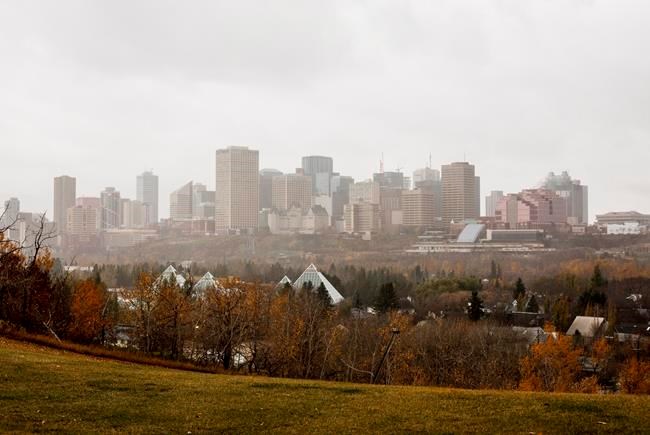 Edmonton city skyline pictured on Tuesday, Oct. 17,2017. The city has agreed to give all of its wards Indigenous names. THE CANADIAN PRESS/Jason Franson

EDMONTON — The City of Edmonton approved a bylaw earlier this month to change the names of its 12 wards to Indigenous ones. Here are the new names and their meanings:

Nakota Isga (Ward 1): (NAH'-koh-tah EE'-ska). Of Sioux origin meaning "the people." In 1880, the Alexis Nakota Sioux were set up on a reserve on the shore of what is now called Lac St. Anne after signing an adhesion, or sacred agreement, to Treaty 6. They established themselves along the Saskatchewan and Athabasca rivers and set up fur-trading posts.

Anirniq (Ward 2): (ah-NIHL'-nook). Means "breath of life" or "spirit." In the 1950s and '60s, about one-third of Inuit were infected with tuberculosis. Most were flown south to Edmonton for treatment. Many died without their families being notified and were buried in city cemeteries. Recommended by Inuit elders because tuberculosis took the breath and spirit of many Indigenous people.

tastawiyiniwak (Ward 3): (tass-taw-WEE'-noh-wok). A Cree term roughly translating into "in-between people." Cree heritage does not have a binary view of gender. It recognizes eight genders, and each has its own role to play in the betterment of the community.

Dene (Ward 4): (dehn-EH') Refers to tribes and people, Indigenous and non-Indigenous, who settled along the North Saskatchewan River, including the area where Edmonton now sits.

o-day'min (Ward 5): (oh-DAY'-mihn). "Strawberry" or "heart berry" is a traditional medicine, which guided the Anishinaabe understanding of the deep connection between mind, body, spirit and emotions. Anishinaabe people in Alberta have been referred to as Saulteaux.

sipiwiyiniwak (Ward 7): (see-pee-WEEN'-oh-wok). Enoch Cree Nation members were known as the River Cree, or sipiwiyiniwak, to other tribes. In the 1800s, the First Nation covered about 114 square kilometres. In 1884, Chief Enoch Lapotac signed an adhesion to Treaty 6, but involuntary land surrenders caused the loss of more than half of Enoch land. The First Nation, bordering the west side of Edmonton, continues to fight for land rights.

papastew (Ward 8): (PAH'-pah-steh-oh). Was a highly respected leader of Papaschase Band 136, which signed an adhesion to Treaty 6 in 1877. It also translates to "large woodpecker."

pihêsiwin (Ward 9): (pee-EH'-soh-wihn). Cree for "land of the thunderbirds." It was given to the ward because, from an aerial view, it is shaped like the bird.

Ipiihkoohkanipiaohtsi (Ward 10): (ee-PEE'-koh-kah-nay-pee-oht-seh). From the Blackfoot language. Was the traditional land where the Blackfoot Nation performed buffalo rounds. The Blackfoot are usually associated with southern Alberta, but traditional migration patterns often had them follow bison up to the North Saskatchewan River.

Ssopmitapi (Ward 12): (spoh-MEE'-tah-pee). Blackfoot for "star person." Comes from stories that acknowledge the sky and the stars, often referred to as Sky Beings. Stories say the Ssopmitapi were sent to Earth by Napi (the Creator) to help the Blackfoot and bison have a reciprocal relationship. Chosen to honour the Iron Creek Meteorite, or Manitou Stone, once located near Viking, Alta. The stone was shared by all tribes and was a place the Blackfoot would perform ceremonies. It was taken to Ontario in the 1800s by missionaries, but was returned to Alberta in the 1970s and is in the Royal Alberta Museum.

(SOURCE: The City of Edmonton)

This report by The Canadian Press was first published Dec. 25, 2020