The magic of Harry Potter returns to APL

The Airdrie Public Library (APL) is once again hoping to cast a spell and transport visitors to the wizarding world of Harry Potter March 9, during this year's APL Harry Potter Day.
0
Feb 28, 2019 12:01 AM By: Allison Chorney 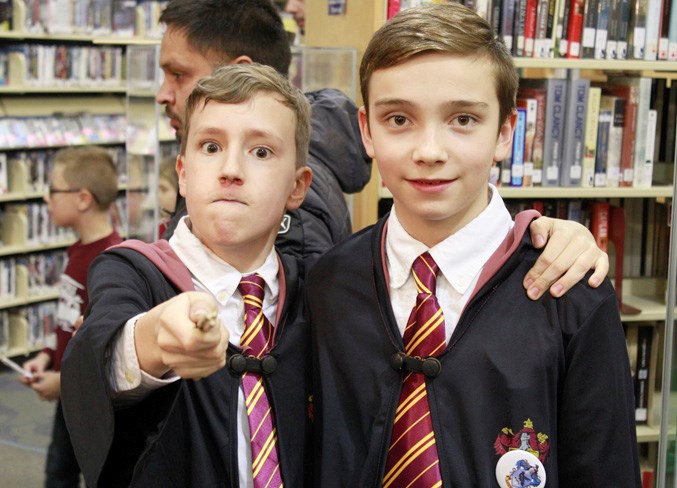 Harry Potter Day will once again transform the Airdrie Public Library into a world of wizardry. The always-popular event will be held March 9 from 12:30 to 2 p.m. and will include a number of hands-on Harry-Potter-themed activities.

The Airdrie Public Library (APL) is once again hoping to cast a spell and transport visitors to the wizarding world of Harry Potter March 9, during this year's APL Harry Potter Day. The phenomenon became a part of literary history in 2018 when the series' U.K. publisher, Bloomsbury, announced the books had sold more than 500 million copies worldwide – making it the best selling series of all time. The books were adapted for the big screen and, according to a 2017 report, have made more than $7 billion in combined global box-office sales. It's fair to say the world created by J.K. Rowling resonates with audiences. "I think it's popular because there's a relatable character for every type of child. In the main three – Harry, Ron and Hermione – most kids feel like they're similar to one of those characters. I know I grew up reading the books...and I really related to Hermione, and that's why I loved them," said APL Junior Programming Supervisor Genista Kippin. "And who doesn't love magic, right?" The free drop-in event will include a few new surprises, including slime-based potions and a scavenger hunt focused on collecting items found in Harry, Ron and Hermione's first year at Hogwarts. "There's a preschool element now, so there will be a little activity just for preschool kids in the children's area of the library," Kippin said. "I looked at the plans from before and didn't see much for that age group, so I wanted to incorporate that so the whole family can come out and have fun." She added the preschool activity will not be messy, making it easier for families to participate, but some of the elements for the older kids are more hands-on and could potentially make a small mess. "The other thing [participants] can look forward to is getting a photo with a mandrake," Kippin said, adding APL's magical plant may still be able to restore those who have been petrified, but without all the screaming they might remember from the books or movies. The magical event is sure to bring out wands and cloaks as fans dress like students from their favourite wizarding school, and Kippin said that is all part of the fun. "We want to see everyone's enthusiasm however they show it, and that's really often with costumes with something like this," she said. The adoration for the series does appear to be continuing. Though the final book in the original Harry Potter series was released July 2007, fans still flock to Harry Potter events, including APL Harry Potter Day. "It's just important to celebrate something that has such a big fan following, especially because it came from books. Anything to get kids reading, right?" Kippin said. "If they are going to be excited about it and maybe check out the books, that is worth us doing it." Harry Potter Day returns to APL March 9 from 12:30 to 2 p.m.