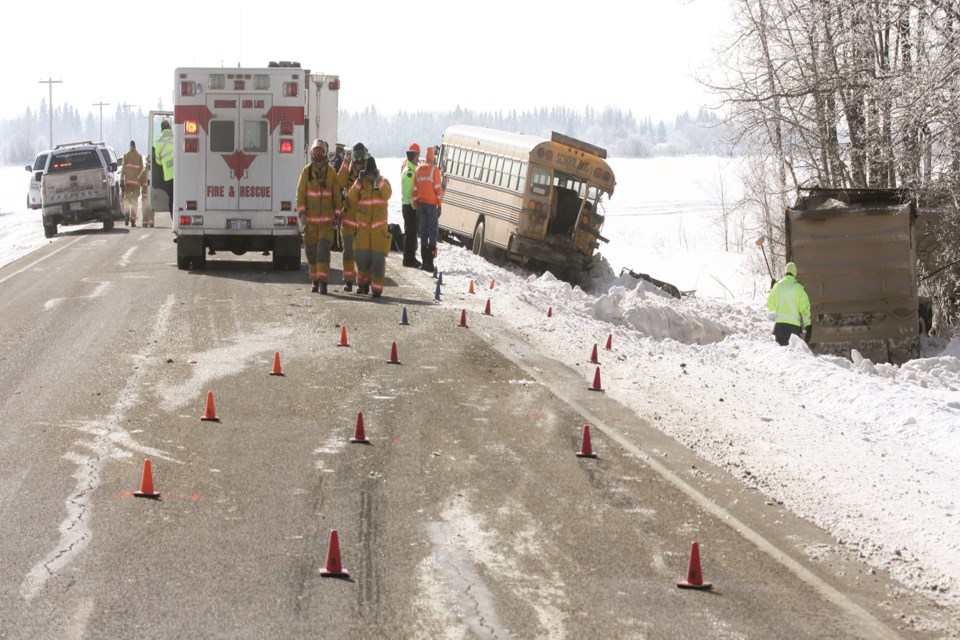 Sukhdeep Deol was sentenced to six months in jail, two years of probation, 50 hours of community service and was ordered to donate $2,000 to a charity of his choice after pleading guilty to one charge of careless driving Nov. 6 relating to the March 2018 death of 15-year-old Maisie Watkinson, who died when the semi Deol was driving collided with her school bus. File

THORHILD COUNTY – The early morning hours of March 7, 2018, were like those of any other late winter Wednesday morning in Northern Alberta — it was freezing; the sun was arriving earlier with every passing morning, but the snow was still deep in the ditches along the highway; and the fog was as thick as it has ever been. Fifteen-year-old Thorhild Central School student Maisie Watkinson was still snug in her bed at 5 a.m. when Sukhdeep Deol did the daily inspection of his Peterbilt semi truck before he set out to a gravel pit near Rochester from Nisku.

A few hours later, as Deol headed south down Opal Road, just west of the Hamlet of Thorhild, with two fully-loaded trailers in the fog, he was forced to brake hard as the rear-end of an unseen school bus appeared out of the mist. Moments later, the two vehicles were in the ditch and Watkinson, who was seated in the back of the bus, was gone.

The investigation found Deol was unable to avoid the collision due to the poor visibility at the intersection; the weight of the load he was hauling (55,500 kg), which required more time and distance to come to a stop; and the mechanical state of the brakes before the collision.

Deol was charged with dangerous operation of a motor vehicle causing death and criminal negligence causing death, but pleaded guilty to a lesser charge of careless driving Nov. 6 in a Court of Queen’s Bench courtroom in Edmonton. He was sentenced to six months in jail, less a day, two years of probation, 50 hours of community service and must make a $2,000 donation to a charity of his choice.

Justice John Gill agreed with a joint submission from the Crown and defence after hearing 13 victim impact statements from Watkinson’s family and friends who described an smart and enthusiastic teenage girl full of promise.

They also spoke of the dark times they have experienced since her death.

Watkinson was one of 13 students on the bus that morning, including her older brother.

"Words cannot describe the pain and suffering you have put my family through," said Watkinson’s mother, who noted her son still blames himself and is still dealing with the trauma he went through that day as he tried to save his sister.

"My son still has nightmares and has alienated himself from friends, stripping him of his childhood," she said. "You've taken my happiness from this world and turned it into blackness.”

“You have taken away the opportunity for me to see my daughter pass that driving exam, graduate, prom, her first loves, her first babies, her future,” she said, speaking directly to Deol.

The statement of facts read in court states the exact speed of both the semi and the bus was undetermined by investigators due to a number of factors, but notes Deol was driving under the speed limit at 60-80 km/h, while the bus was accelerating after turning onto the highway from Township Road 594.

It also states: “Mr. Deol failed to note on the (inspection) report that some of the brakes on his truck and trailers were defective and needed to be fixed for safe operation of the semi. There was some braking, but not fully functioning braking on at least two of seven wheel axles in the semi and trailer combination. How to complete the report before commencing operation of the semi were prerequisites to obtaining his Class 1 operator’s license.”

Court also heard that moments before the crash, the driver of the school bus came to a stop at the intersection and shut down his engine, opened his window and door to listen for traffic as he was unable to see any vehicles approaching from the north or south because of the thick fog. When he heard nothing, he restarted the engine and turned south onto Opal Road, and was rear-ended on the passenger side, where Watkinson was sitting, a few seconds later. She dies as a result of blunt force trauma to her abdomen and chest.

“But for the school bus proceeding from the stop sign onto Opal Road when it was not safe to do so, the collision would not have occurred,” the statement of facts also read.

Defence lawyer Jake Chadi told court his client is a father of three, aged four to 17, originally fromo India, who lives in Edmonton. He has had his Class 1 licence since 2014, and has been gainfully employed ever since. He has also never been in a collision and has no criminal record.

Deol is devastated by what happened, said Chadi, but added his client would not address the court due to “difficulty articulating the English language.” Deol was assisted in court by a Punjabi translator.

About the Author: Chris Zwick