EDMONTON — Christmas trees decorated with Hawaiian leis were placed outside the constituency office of Alberta's municipal affairs minister on Sunday amid anger over a growing list of government members who ignored advice to avoid unnecessary travel
Jan 4, 2021 9:00 AM By: Canadian Press 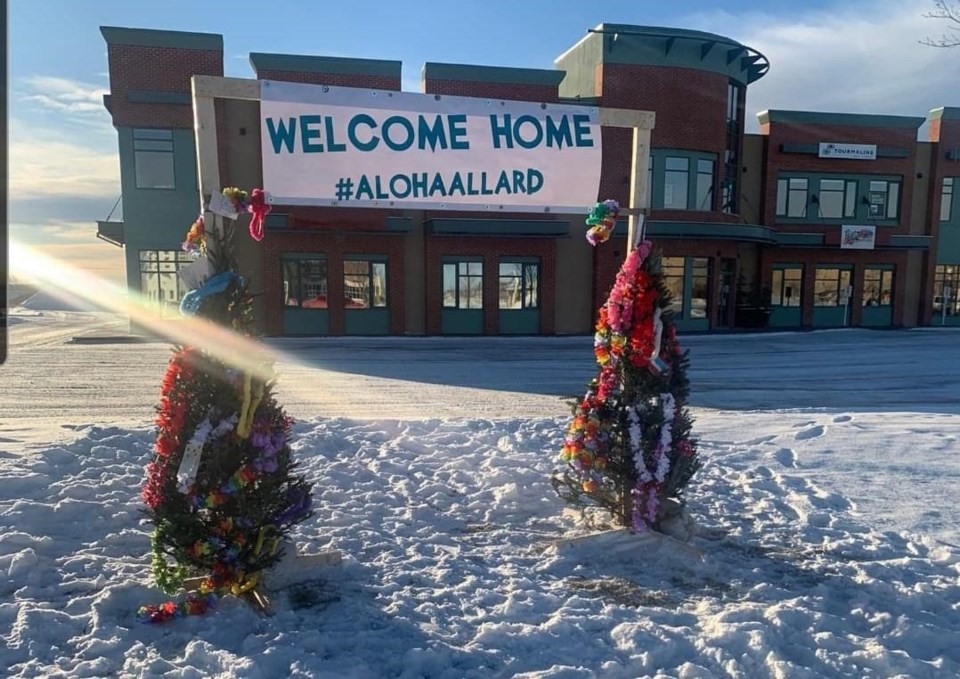 hristmas trees decorated with Hawaiian leis, as shown in this handout image provided by Aaron Penson, were placed outside the constituency office of Alberta's municipal affairs minister on Sunday amid anger over a growing list of government members who ignored advice to avoid unnecessary travel and left the country over the holidays. THE CANADIAN PRESS/HO-Aaron Penson

EDMONTON — Christmas trees decorated with Hawaiian leis were placed outside the constituency office of Alberta's municipal affairs minister on Sunday amid anger over a growing list of government members who ignored advice to avoid unnecessary travel and left the country over the holidays.

The fallout from Tracy Allard's controversy-raising vacation to Hawaii continued to unfold Sunday as a spokesman for the United Conservative caucus confirmed that Fort McMurray-Wood Buffalo MLA Tany Yao was the latest to join the list of UCP legislature members to have taken trips outside of the country.

"We understand that MLA Yao is currently in Mexico. We are attempting to contact him to advise him to return as per the premier’s directive," Tim Gerwing said in an email late Sunday.

That directive from Jason Kenney came Friday when he said his caucus members and senior staff were forbidden from travelling outside Canada unless it's for government business.

Kenney was responding to reports that Allard had vacationed in Hawaii over the legislature's holiday break. It has since been confirmed that UCP MLAs Jeremy Nixon, Tanya Fir, Pat Rehn and Jason Stephan also took trips outside the country over the holidays.

"They've talked about personal responsibility. They've talked about trusting Albertans and to make the right choice, and meanwhile they're practicing that from beaches," said Aaron Penson, a Grand Prairie resident who was part of a group that erected the trees outside Allard's office.

Allard admitted she flew to Hawaii with her husband and daughter, despite widespread advice from health officials to avoid unnecessary travel in order to curb the spread of COVID-19.

Penson, who is affiliated with the centrist Alberta Party that holds no seats in the legislature, said organizers encouraged constituents to hang Christmas cards from the lei-strewn trees with stories about holiday traditions their families were forgoing due to COVID-19.

"The people who are supposed to be leading by example are out travelling the world," Penson said.

Even a UCP colleague expressed frustration, saying some of her fellow MLAs showed "a major lack of judgment" in taking a trip to destinations that also included Arizona and Mexico.

"We’ve seen people shut into their homes and asked not to leave for fear of fine for some, and for me this is just about leading by example, and showing our constituents that we will put our feet on the ground and do what we said we were going to do.” Brooks-Medicine Hat MLA Michaela Glasgo told CHAT News.

Kenney has said that because there was no firm rule, none of the members of his government who recently vacationed abroad will be sanctioned.

The premier faced criticism for being slow to impose new restrictions in mid-December despite weeks of surging COVID-19 cases, as well as for the province missing its end-of-year vaccination goal.

"This just keeps getting worse. Why are we slowly finding out that more UCP electeds are abroad?" Opposition NDP Leader Rachel Notley tweeted Sunday.

The party has said all 24 NDP MLAs are in Alberta and have been for the duration of the holidays.

This report by The Canadian Press was first published Jan. 3, 2021.