"I think by the time the province decides it's time for the masks to come off I think Cochrane will be ready to," said Councillor Morgan Nagel.
Apr 15, 2021 1:15 PM By: Chelsea Kemp 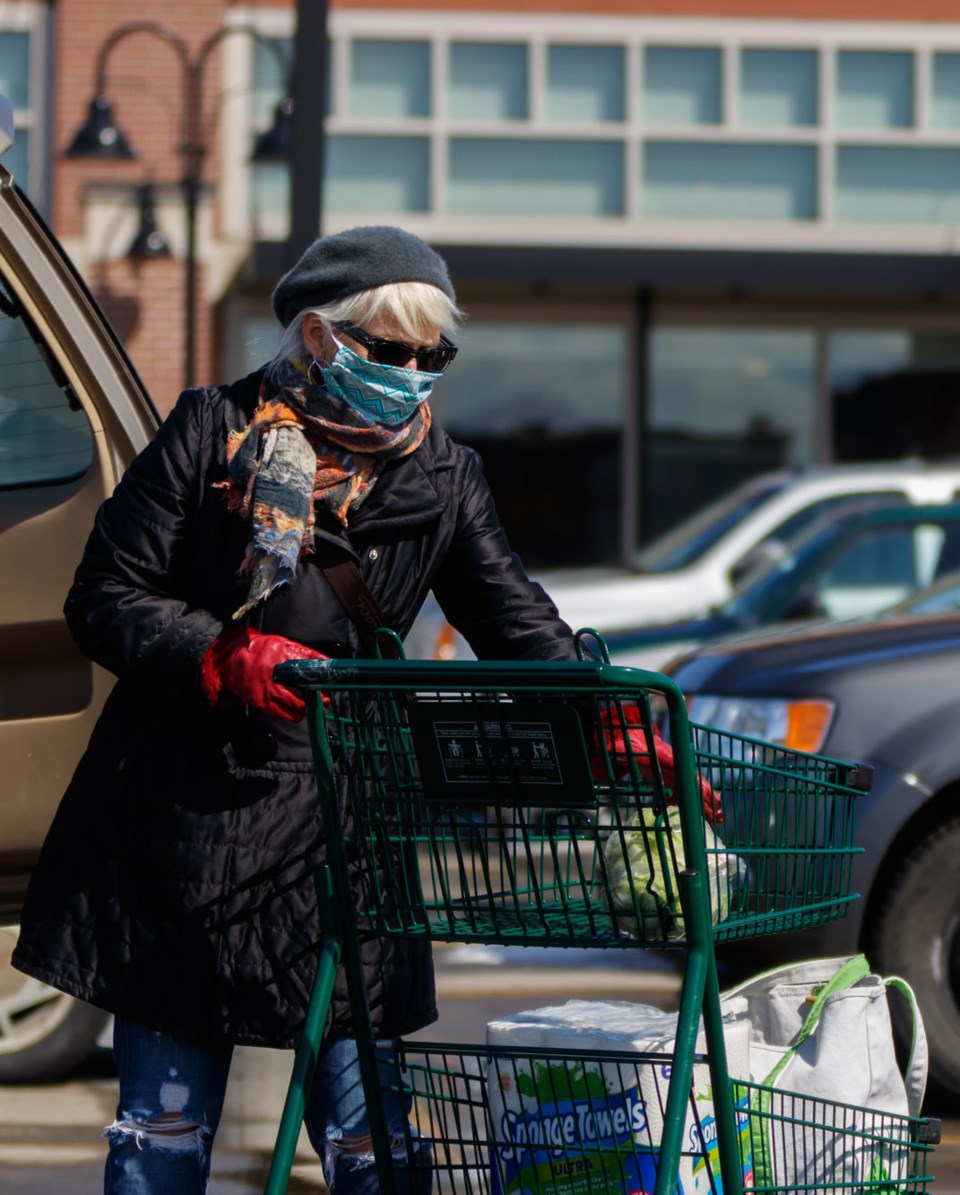 Jacke Tunna wears a mask and gloves while shopping at Save-On-Foods in April 2020. File Photo

COCHRANE— After a short debate and close vote, Cochrane Council opted to let the Town's mandatory face-covering bylaw lapse at the end of April.

The bylaw to extend mandatory masks in Cochrane was given first reading at the regular council meeting on Monday (April 12). It was defeated after Mayor Jeff Genung, Councillors Morgan Nagel, Patrick Wilson and Alex Reed voted against the document.

The proposed document would have extended the bylaw to Dec. 31, 2021. Town administration recommended this action to ensure consistency in the Town's approach to the COVID-19 pandemic.

To keep the bylaw in effect, council was required to act before May 1 when it expires.

The current face-covering bylaw in Cochrane is enacted when the Town reaches 10 active COVID-19 cases, it is superseded by the current provincial mask mandate.

"I would like to see us defeat first reading. From my standpoint it's a second layer of government that is not necessary," Genung said.

He added if circumstances change council can call a special meeting regarding mandatory masks to adapt to changing health measures and community needs.

"We can put a mask bylaw back in place if we need," he said.

Genung added he believes letting the municipal bylaw lapse will not affect the health and safety of Cochranites because the provincial mask mandate is in effect.

Coun. Fedeyko called on council to keep the municipal bylaw in place because of the high number of active COVID-19 cases in Cochrane and rumours the province may take a regional approach to public health measures.

There have been some surprise provincial decisions during the pandemic, Fedeyko said, and the bylaw helps to ensure they can keep residents safe.

She added mandatory masks have the potential to become a debate in the fall election and carrying the bylaw forward to the end of December could help prevent this issue.

"I don't want to be arguing over masks as we come into a fall election," Fedeyko said. "We need to leave something in effect and keep our community safe and healthy right now."

She added it is easy to keep the bylaw in place and it may prove challenging to create a new one.

Coun. Nagel said noted the bylaw was initially put in place by council because the province and the federal government failed to take action to protect residents.

Since July the province has stepped up to combat the spread of the virus and new public health measures have been introduced rendering the municipal mask bylaw redundant.

"I think by the time the province decides it's time for the masks to come off I think Cochrane will be ready to," Nagel said.

Coun. Flowers supported keeping the bylaw in the books until the end of the year.

"I think it's easier to take it away then than it would be to put it back," Flowers said.

As of the end of the day Tuesday (April 13) the Town of Cochrane had a reported 137 active cases of COVID-19. There have been 551 cases of the virus reported to date.

Calgary mayoralty candidate, pastor both released after alleged COVID-19 violations
May 18, 2021 10:45 AM