The Bow Valley has rallied around Canmore Eagles coach and general manager Andrew Milne, with a GoFundMe that has already successfully raised enough funds to cover a $1,000 fine from the AJHL. The local hockey coach was handed a 15-game suspension and fine for speaking to the media about an outbreak of COVID-19 that affected his team, staff and the community.
Dec 26, 2020 8:15 AM By: Tanya Foubert 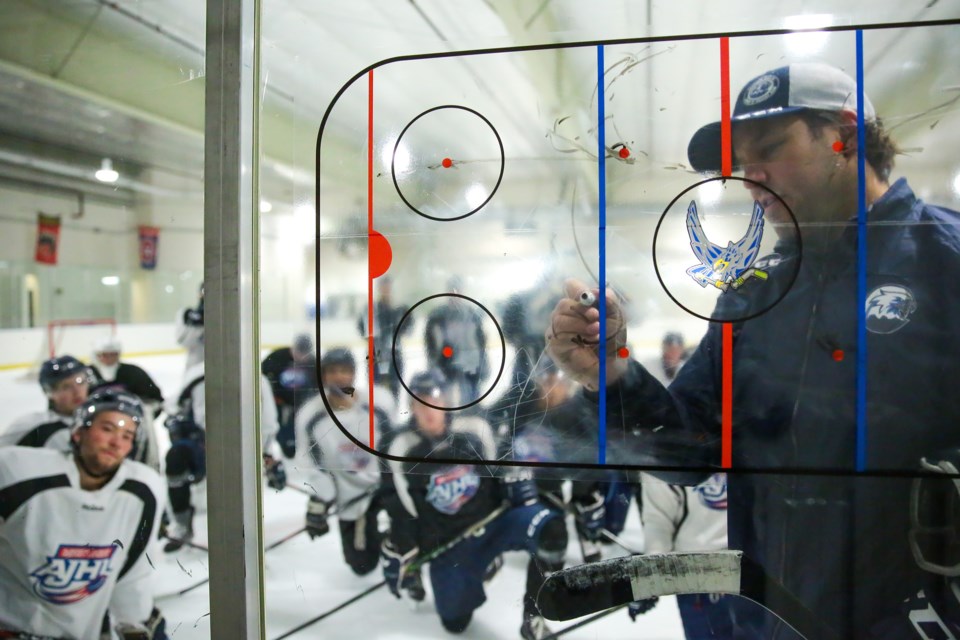 BOW VALLEY – The Bow Valley hockey community has rallied behind the coach and general manager of the Canmore Eagles hockey club, Andrew Milne, after the league suspended and fined him for speaking openly to the media about a COVID-19 outbreak that affected his team.

A GoFundMe page was set up by MD of Bighorn resident Brent Rosvold, whose family also billets players from the Alberta Junior Hockey League (AJHL) team.

"We thought Coach Milne handled the news of an outbreak on his team in a very professional, transparent, and caring way," Rosvold wrote on the GoFundMe page.

"The fact that the AJHL is now shaming, isolating, and punishing Milne for being transparent is inappropriate. The fine and suspension are in our opinion, baseless.

"Although we think the AJHL should retract the statements made, along with the penalties levied, we’re doubtful. Let's take this moment to voice our support to Coach Milne for his honest, and transparent reaction to this very challenging situation."

The Outlook requested an interview with AJHL commissioner Ryan Bartoshyk on Wednesday (Dec. 23), but has not yet heard back from him or the league.

On Nov. 19, the AJHL confirmed a player with the Eagles had tested positive for COVID-19. A week later, Milne confirmed the team was dealing with an outbreak of the virus, with upwards of 15 players and staff affected.

CTV and CBC reported this week that Bartoshyk said Milne's comments to local and regional media while outbreak was affecting his team, staff and billet families, brought "discredit to the league."

A 15-game suspension and $1,000 fine are reported to have been issued against Milne after a discussion about the issue at the AJHL board meeting last Friday (Dec. 18).

Media reports also stated that all AJHL teams are no longer allowed to speak to the media about COVID-19, or plans for the league to return to play.

Milne declined to comment on the matter and referred the Outlook to the AJHL.

Alberta's Chief Medical Officer of Health Dr. Deena Hinshaw was asked for her reaction to the situation during her daily briefing Wednesday. While she had no direct knowledge about the circumstances, she said it is important that when people in positions of authority speak about COVID-19, they are factual and accurate.

"I can't speak with any specifics to this particular instance, but I believe both things are important. First of all, people should not be shamed for having COVID. We know that everyone is at risk; no one is spared and so we need to be supportive of people who have COVID-19."

Meanwhile, the AJHL has not yet made a decision on when or how its teams will return to play. The season was suspended on Nov. 25 when a second state of public health emergency was declared in Alberta.

Several options were discussed at the AJHl board meeting last week, including a three-team cohort or smaller regional divisions. However, with a public health measures in place until at least Jan. 11 to limit the spread of the virus, it is unclear what direction the league will take.

“Once we have an understanding of what this restart will look like, we will sit down as an organization and involve all the groups – players, parents, billets, and staff," said Milne in a previous interview with the Outlook.

––with files from Evan Buhler and Jordan Small

About the Author: Tanya Foubert

Tanya Foubert started as a news reporter at the Rocky Mountain Outlook in 2006. She won the Canadian Community Newspaper Award for best news story for her coverage of the 2013 flood. In December 2018, she became editor of the Outlook.
Read more