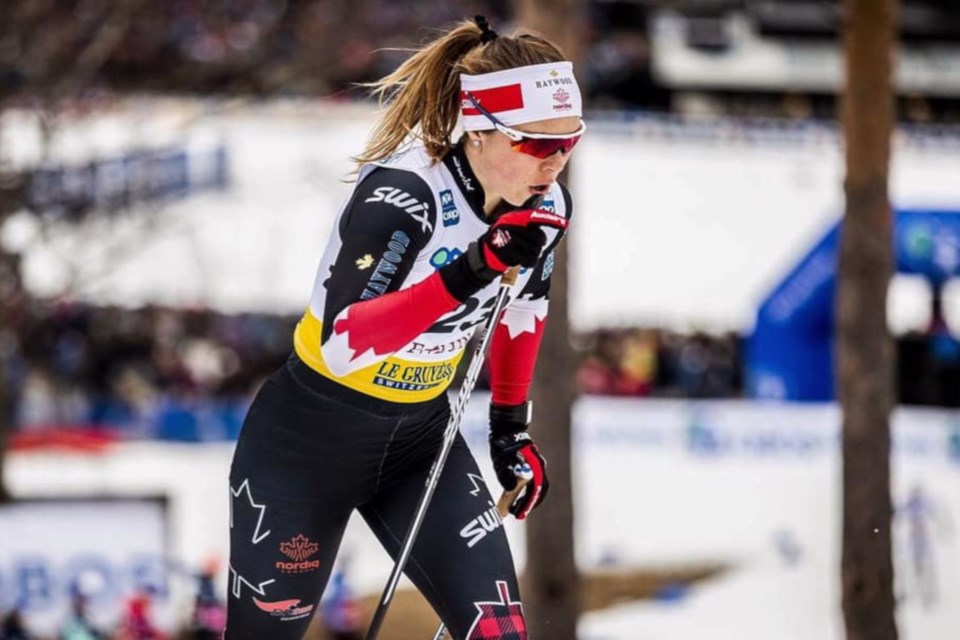 Last year, local woman Maya MacIsaac-Jones competed in the World Cup in Falun, Sweden, where she placed 24th. This year at the World Cup Skate Sprint in Ulricehamn, Sweden, she placed 18th, her personal best. She is hoping it is enough, added with past and upcoming races, to qualify for the 2022 Winter Olympics in Beijing, China.Maya MacIsaac-Jones

ATHABASCA — When she was four years old local athlete Maya MacIsaac-Jones was still many years and thousands of hours away from becoming an Olympic hopeful, but today, she is one step closer to that dream after a personal best finish Feb. 6.

In Ulricehamn, Sweden the 25-year-old Athabascan competed in a World Cup of cross-country sprint, breaking into the Top 20 for the first time in her two-decade career as a competitive skier that started on her family farm near Baptiste Lake.

“I skied on the farm and then my first race my parents put me in the Tawatinaw loppet,” MacIsaac-Jones said in an interview from Sweden. “I was probably around four or five and so started skiing just for fun in Athabasca. I did the local ski clubs Jackrabbits' program, which is a program for kids where you learn to ski and from there I progressed into racing and trained both with some high-performance clubs in southern Alberta and then also with the school ski racing teams here at Athabasca and ski raced all throughout high school.”

She competed in the World juniors and some national championships and after graduating from the old Edwin Parr Composite (EPC) she moved to Canmore where the national team is based to train with them.

Now her passion has taken her around the world, competing in countries like New Zealand, China, Kazakhstan, Norway, Sweden. Finland, the United States, Germany, Austria. Switzerland, Italy, the Czech Republic and of course, Canada.

“We usually travel over to Europe at the start of the winter and we didn't do that this year due to COVID, but we usually spend four months or so on the road competing here and it's essentially a different race venue every weekend traveling from country to country,” she said.  “It's a group of anywhere from 40 to 70 female and 40 to 70 male athletes at the same time, all traveling around competing and then each country has selection events where the athletes have to be essentially among the best in their country to qualify to compete in the World Cups.”

Right now, on the Canadian team there are five women, including MacIsaac-Jones, and seven men training hard every day to stay in peak form while following strict COVID protocols including weekly COVID testing, twice-weekly as race days looms.

“Usually sometime between 7:30 and 8 a.m. I get up, have breakfast, go for the first training session, which will take one-and-a-half to three hours depending on the day,” she said. “Recovery is a huge part of ski training, it actually takes up quite a bit of time so, come back, have a shower, have lunch, usually take a nap — which maybe sounds like we're just lying around, but when you're training so much you kind of need your sleep — get up, usually do some computer work and then head out for the second session around 4 p.m., come back, make dinner and go to bed and do it all over again.”

That dedication started early, when even going to Landing Trail Intermediate School (LTIS) she would often head out right after school to ski the Muskeg Creek Trails and later foregoing weekend parties with her classmates to attend ski camps and competitions, but one of the things about cross country skiing she said, is it can be solo or with family.

“I love how it's a great family sport, I think it's one of those fun sports that you can do both competitively, but also just recreationally. It's not like bobsled, for example, where you can't just go for a fun bobsled with your family,” MacIsaac-Jones said. “With cross country skiing, I can train and I can compete but then I can also go for a Christmas Day ski with people that I love and spend time outdoors.”

April is traditionally the only time MacIsaac-Jones and her teammates have off from their grueling training schedule, but she is not thinking about that right now, she is focused on the next race, working with trainers, physical therapists, and sports psychologists who help athletes focus and move past the crushing defeats, like when she missed qualifying for the 2018 Olympics by the blink of an eye.

“The last Winter Olympics in 2018, I missed out on qualifying by a second,” she said. “Basically, it was heartbreaking. It was so close. And so, I've been training hard for the Winter Olympics coming in 2022. I'm really gonna try and go for it again.”

MacIsaac-Jones is grateful for her local sponsors, like Home Hardware and Cheap Seats, who helped her get started, as well as her sponsors in Canmore, who have helped her achieve her goals.

“It is a lot of pressure, but it's also a privilege to be in this position. I think, you know, coming from a small town when I was growing up, I always kind of felt a bit different because there were a lot of kids from big towns with big ski programs and access to really professional coaching, all that type of stuff, and I felt a bit like the underdog coming from Athabasca just showing up and trying to beat them all,” she said. “And so, to be in this position where I can compete internationally and having come from Athabasca, it's a really cool opportunity.”

She was in the Czech Republic for the Feb. 13 weekend, then there are the World championships in Oversterfte, Germany, for the last two weeks of February, before going to Norway for the final weeks of World Cup racing.

“The community, for the most part, it's some of the best friends that I've made have been through cross country skiing,” she said.

About the Author: Heather Stocking

Heather Stocking a reporter at the Athabasca Advocate, a weekly paper in Northern Alberta. Heather covers all aspects of the news in and around Athabasca and Boyle as well as other small communities.
Read more