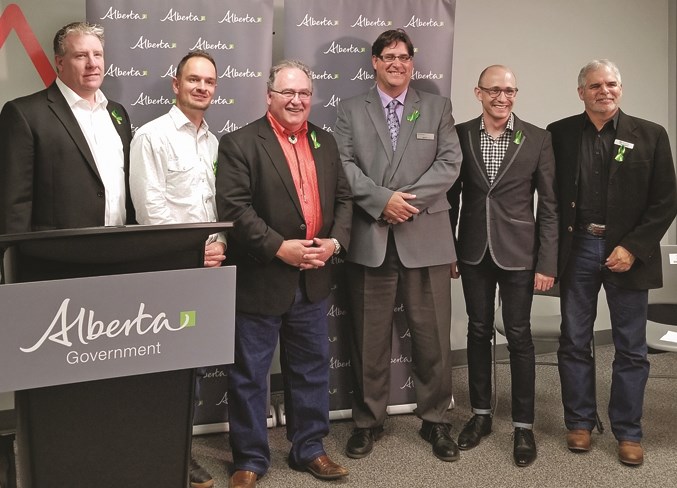 Brian Mason (third from left), Minister of Transportation, announced consultation to enhance training and oversight of the trucking and busing industry, and to improve driver road test services during a July 10 press conference.

Transportation Minister Brian Mason announced July 11 the province will undertake public consultation to determine new safety initiatives for the commercial trucking industry, as well as potential changes to driver road tests. Speaking during a press conference in Edmonton, Mason said the decision to embark on the project was in part driven by the April 6 collision, which killed 16 members of the Humboldt Broncos Junior ‘A’ hockey team and support crew, and injured 13 more. “The matters that we’re working on today are things we were working on at that time, but clearly, the terrible tragedy has focused everyone on the need to do even more to make sure that our highways (and) our trucking system are as safe as possible,” he said. The driver of the semi-trailer involved in the collision, Jaskirat Sidhu, had only been working for Calgary-based Adesh Deol Trucking Ltd. for about a month at the time of the collision. He has since been charged with 16 counts of dangerous operation of a motor vehicle causing death and 13 counts of dangerous operation of a motor vehicle causing bodily harm. Training for commercial drivers, as well as permitting and licensing of commercial carriers, is part of the review Mason said has been underway since summer 2017. Three new initiatives were announced during the press conference. Commercial drivers are currently only required to pass a test to get their Class 1 or Class 2 license, according to Mason, and are not mandated to take any further training before heading out on public roads. “We’re planning to bring a Mandatory Entry Level Program (MELT) online in Alberta in January of 2019. We’ll be consulting with stakeholders about what Alberta’s MELT program should look like,” he said. “We’ll be talking about the curriculum (and) the length of the training, and we’ll be examining the experience they’ve had in Ontario (which already has a MELT program).” Mason said the government would also be looking at safety requirements for new commercial carriers. According to Mason, Alberta is the only province which allows new carriers to operate under a temporary, 60-day safety fitness certificate, and the government is planning to remove that option. “This will effectively eliminate the 'chameleon’ carrier, where a start-up trucking company is put out of service for violations – failing to meet safety standards – and then simply changes the name and reopens and continues to operate,” Mason said. “That’s been a particular problem in the province of Alberta. Carriers will have to comply with the requirements of a safety certificate before they start operation, not after.” The third initiative Mason announced is modification of the road test model for all classes of drivers’ licenses. “We believe Albertans deserve a road test model that is safe, reliable and fair. To achieve this, we’re considering the possibility of restoring driver examiners as Government of Alberta employees,” he said. “There are a number of options to consider, and we’re going to be consulting with the industry on all of them.” Mason said the government intends to have all changes in place in January 2019. “We take this very seriously. We think there are important initiatives here, including the education of drivers, the regulation of the industry and improvements in how we do driver testing,” he said. “All three are critical pieces to ensure we keep our roads safe for the public and ensure that people who work in the industry meet the highest standards of public safety.” More information about the provincial government's planned public consultation is available online at alberta.ca/commercial-driver-engagement.aspx