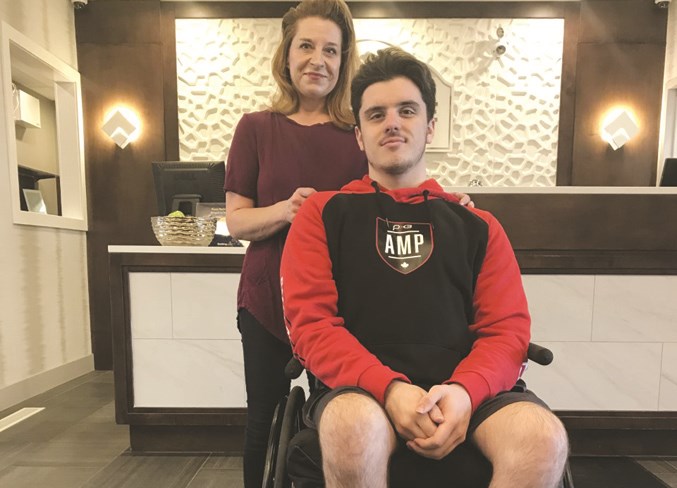 Michelle and Ryan Straschnitzki are advocating for mandatory seatbelts on school and sport team buses. Ryan was paralyzed in the April 6 collision involving the Humboldt Broncos hockey team.

Watching her children board a bus is now a cause of anxiety for Michelle Straschnitzki, something she hopes a new campaign will address. Straschnitzki’s son Ryan was paralyzed from the chest down in the April 6 collision that killed 16 Broncos players and team personnel, and injured 13 more. Had the bus been equipped with seatbelts, she believes, some of the players may have sustained less serious injuries. “Any restraint to keep these people in the bus instead of being thrown out would have made a difference,” Straschnitzki said. Even if one person in the collision could have been helped by a seatbelt, she said, the investment would have been worth it. Straschnitzki, along with other Broncos parents, is speaking up about the need for all buses to be equipped with seat and shoulder belts through the Buckle Up for the Broncos online campaign. “It’s critical. We wear seatbelts in cars – it’s mandatory. We wear seatbelts in planes and pretty much any other mode of transportation, and it really does make sense,” she said. “It really does save lives, regardless of what other arguments come through.” Buckle Up for the Broncos is a hashtag awareness movement on social media that Straschnitzki calls “simple and able to reach a large audience in a very short period of time.” The hashtag is aimed at reminding everyone – regardless of whether they are in a car, a bus or some other form of a vehicle – to buckle up. Advocacy is something she said she feels strongly about in wake of the Broncos tragedy which put her family in the spotlight. “With hockey season starting up, [my son] has to get on a bus. I was more panicked than he was,” said the mother of four. “He seemed to take it all in stride. [AMHA] made sure there were seatbelts on the bus.” Darrin Harrold, Alberta Minor Hockey Association (AMHA) director of hockey operations, said the organization has mandated all teams’ charter buses must be equipped with seatbelts, and all players, staff and parents/volunteers are required to buckle up. “AMHA has made every effort to source multiple companies that have buses with proper seatbelt capabilities. Every effort must be made to comply with this mandate,” he said in an email to the Airdrie City View. “The board will review on a case-by-case basis the rare instance that a bus is not available that has adequate seatbelt capabilities. The safety of all our athletes is of utmost importance, both on and off the ice.” “The word needs to spread. It needs to get out there, worldwide,” Straschnitzki said. Transport Canada announced in June all newly-built highway buses would be required to have occupant restraints by September 2020. While Straschnitzki welcomes this news, she said it won’t come soon enough. “It can’t be soon enough for any of us. It’s a good start, I believe,” she said. “Choosing to use bus lines that already have [seatbelts] installed and being proactive in thinking ahead – this needed to happen anyway.” Alberta Transportation Minister Brian Mason said the Humboldt tragedy has prompted the provincial government to take a “closer look at ways to improve safety on roads and highways.” “In Alberta, we are taking three steps: changing the way driver examinations are conducted, requiring mandatory training for new Class 1 and Class 2 drivers and enhancing oversight of the commercial trucking industry,” Mason said in an email to Airdrie City View. “On the issue of mandatory installation and use of seatbelts on buses, we are re-examining this issue, the concerns that have been raised and the research that has been done. We are having discussions with Transport Canada about this issue as we strive for safer highways for everyone.”

Judge tosses application to pause Alberta inquiry into funding of oil and gas foes
Nov 30, 2020 10:47 AM