Video: 20 seconds of terror between missiles in Iran crash 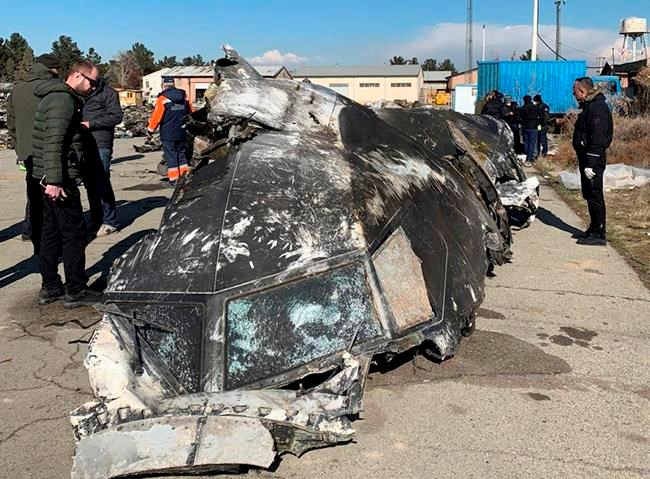 DUBAI, United Arab Emirates — Iran's top diplomat acknowledged Wednesday that Iranians “were lied to" for days after the Islamic Republic accidentally shot down a Ukrainian jetliner. The admission came as new surveillance footage purported to show two surface-to-air missiles 20 seconds apart shred the airplane and kill all 176 people aboard.

The downing of the Ukraine International Airlines flight last week came amid heightened tensions between Iran and the U.S. over its unraveling nuclear deal. Iranian President Hassan Rouhani for the first time Wednesday threatened Europe by warning its soldiers in the Mideast “could be in danger” over the crisis as Britain, France and Germany launched a measure that could see United Nations sanctions re-imposed on Tehran.

The crash — and subsequent days of Iranian denials that a missile had downed the airplane — has sparked angry protests in a country already on edge as its economy struggles under crushing American sanctions.

Tensions between Washington and Tehran reached a fever pitch two weeks ago with the American drone strike in Baghdad that killed the powerful Revolutionary Guard Gen. Qassem Soleimani. The general had led Iranian proxy forces abroad, including those blame for deadly roadside bomb attacks on U.S. troops in Iraq.

Iran for days afterward insisted a technical fault downed the 3 -year-old Boeing 737-800. It wasn't until Western governments, including Canadian Prime Minister Justin Trudeau, went public with their suspicions the plane had been shot down that Iran admitted it fired on the plane.

Not admitting the plane had been shot down "was for the betterment of our country's security, because if we had said this, our air system would have become crippled and our guys would have had doubted everything," said Gen. Amir Ali Hajizadeh, the head of the Guard's aerospace program, in television footage aired Wednesday.

Hajizadeh only days earlier apologized on state television and said: “I wish I were dead.”

“In the last few nights, we’ve had people in the streets of Tehran demonstrating against the fact that they were lied to for a couple of days,” Zarif said.

Zarif went onto praise Iran's military for being “brave enough to claim responsibility early on."

However, he said that he and Rouhani only learned that a missile had down the flight on Friday, raising new questions over how much power Iran's civilian government has in its Shiite theocracy. The Guard knew immediately afterward its missile downed the airline.

The Guard is answerable only to Supreme Leader Ayatollah Ali Khamenei, who is expected to preside over Friday prayers in Iran for the first time in years over anger about the crash.

The new surveillance footage obtained by The Associated Press showing the missile fire was filmed off a monitor by a mobile phone. It appears to be taken near the town of Bidkaneh, northwest of Tehran’s Imam Khomeini International Airport.

The two minutes of black-and-white footage purportedly shows one missile streaking across the sky and exploding near the plane. Ten seconds later, another missile is fired. Some 20 seconds after the first explosion, another strikes near the plane. A ball of flames then falls from the sky out of frame.

The footage corresponds with AP reporting, appears genuine and matches geographic features of the area. The date in the upper right-hand corner of the video appears to correspond to Iran's Persian calendar. It also explains how so many people filmed the shoot down: The first explosion drew their attention and their filming mobile phones to the predawn sky.

Amid all of this, Britain, France and Germany on Tuesday launched the so-called “dispute mechanism” pertaining to Iran's 2015 nuclear deal with world powers. Iran has been breaking limits of the accord for months in response to President Donald Trump's decision to unilaterally withdraw America from the deal in May 2018.

After Soleimani's killing, Iran announced it would no longer abide by any of the nuclear deal's limits, which had been designed to keep Tehran from having enough material to be able to build an atomic bomb if it chose. However, Iran has said it will continue to allow the United Nations' nuclear watchdog access to its nuclear sites.

Speaking before his Cabinet, Rouhani showed a rarely seen level of anger in wide-ranging remarks Wednesday that included the threat to Europe.

“Today, the American soldier is in danger, tomorrow the European soldier could be in danger,” Rouhani said. ”We want you to leave this region but not with war. We want you to go wisely. It is to your own benefit.”

Rouhani did not elaborate.

European forces have been deployed alongside Americans in Iraq and Afghanistan. France also maintains a naval base in Abu Dhabi, the capital of the United Arab Emirates, while Britain has opened a base in the island nation of Bahrain.

European Commission spokesman Peter Stano told reporters that officials were aware of the threats, but the European Union had no plans to leave Iraq. Italian Minister Lorenzo Guerini told lawmakers his government has plans to increase Rome's troop levels at the Strait of Hormuz, the narrow mouth of the Persian Gulf through which 20% of all oil passes.

German Minister Annegret Kramp-Karrenbauer, meanwhile, made an unannounced visit Wednesday to the Azraq base in Jordan, where German troops serving in the fight against the Islamic State group are based. Germany wants to resume training Iraqi forces.

Rouhani also reiterated a longtime Iranian pledge that Tehran doesn't seek the bomb. That pledge comes amid Western fears that the time it would need to have enough material for a nuclear weapon is narrowing. Under the deal, experts estimated Iran needed a year.

Meanwhile on Wednesday, Iranian state media said the British ambassador to Iran, Robert Macaire, had left the country. Macaire departed after being given what the state-run IRNA news agency described as “prior notice,” without elaborating. Britain's Foreign Office insisted Macaire's trip to London was "routine, business as usual" and was planned before his arrest and brief detention in Tehran on Saturday. He was detained after attending a vigil about the plane shoot down that turned into an anti-government protest. Britain said he planned return to Iran.