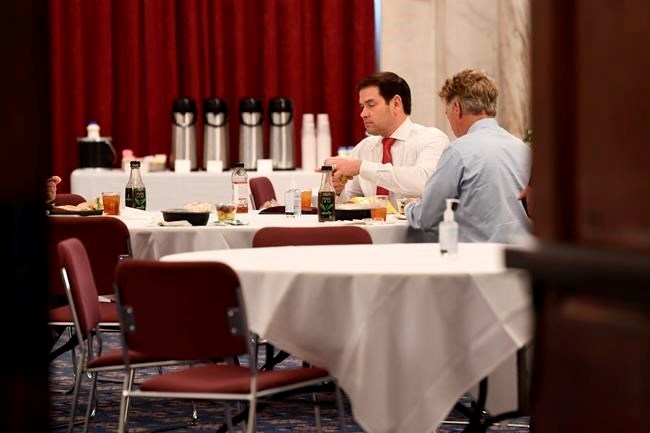 WASHINGTON — Sen. Rand Paul of Kentucky has tested positive for the novel coronavirus, becoming the first case of COVID-19 in the Senate and raising fears about the further transmission of the virus among Republicans at the Capitol.

Paul, an eye surgeon, went into quarantine Sunday after learning his results. He said he has not had symptoms and was tested out of an abundance of caution due to his extensive travel and events. He said he was not aware of any direct contact with any infected person.

His announcement led Utah's two GOP senators — Mike Lee and Mitt Romney — to place themselves into quarantine, stepping away from negotiations as the Senate worked on a $1.4 trillion economic rescue package for the coronavirus crisis. At least five senators, including Paul, were in self-quarantine Sunday, Senate Majority Leader Mitch McConnell said.

"The coronavirus has hit the Senate today,'' said McConnell, R-Ky. "It's not just back in our states but right here in the Senate.''

Sen. Kyrsten Sinema, a Democrat from Arizona elected in 2018, chastised Paul on Twitter, saying his decision to return to the Capitol after he was tested — but before he learned the results — was "absolutely irresponsible.''

Sinema said she has "never commented about a fellow Senator’s choices/actions. Never once.''

But she added: "This, America, is absolutely irresponsible. You cannot be near other people while waiting for coronavirus test results. It endangers others & likely increases the spread of the virus.''

Other senators, including Ted Cruz of Texas and Lindsey Graham of South Carolina, had gone into self-quarantine while they awaited the results of a coronavirus test. Both were negative.

Responding to criticism on Twitter, Paul's office said, "We want to be clear, Senator Paul left the Senate IMMEDIATELY upon learning of his diagnosis. He had zero contact with anyone & went into quarantine. Insinuations ... that he went to the gym after learning of his results are just completely false & irresponsible!''

Paul's office did not say when he was tested. Representatives of his office could not immediately be reached for comment.

President Donald Trump called Paul "a great friend" and said he's “always there when we needed him.''

Paul and other lawmakers “are going to be fine,'' Trump said. ”I hope they'll be fine.''

Paul, a deficit hawk, was among eight Senate Republicans who voted against a House-passed bill last week that provided more than $100 billion to boost testing for the coronavirus and guarantee paid sick leave for millions of workers. He also was the only Republican senator who opposed an earlier bill authorizing $8.3 billion for the initial response to the coronavirus.

The senator was on Capitol Hill this past week, including at a luncheon Friday among GOP senators. He spoke on the Senate floor on Wednesday afternoon, addressing the cornonavirus and a failed amendment he sponsored that would have paid for virus relief efforts by withdrawing U.S. forces from Afghanistan.

A spokesman for Sen. Jerry Moran, R-Kan., said Moran briefly saw Paul at the Senate gym Sunday morning and that he shared that information with GOP colleagues at a policy meeting. Moran “followed CDC guidelines and kept a safe distance between him and Sen. Paul,'' spokesman Tom Brandt said. Moran has spoken with the attending physician at the Capitol and has been told he does not need to self-quarantine, Brandt said.

South Dakota Sen. John Thune, the second-ranking Republican senator, said on the Senate floor that lawmakers will consult with the attending physician about all senators who have been in contact with Paul.

Romney said he was praying for Paul and noted that Paul's health is compromised. Paul, 57, broke several ribs in 2017 when a assaulted him over a long-standing landscaping dispute. Paul, who was later awarded $580,000 in damages and medical expenses, had surgery last year to remove part of a lung damaged by the assault.

The Senate was in session Sunday seeking a bipartisan response to the pandemic. If approved, the bill would be the third measure Congress has approved in response to the coronavirus this month.

The White House has increasingly emphasized that testing should prioritize the elderly and health care workers who have symptoms of the virus. While most cases of COVID-19 are mild and tens of thousands of people have recovered, older people and those with underlying health problems are at higher risk for more serious problems, such as pneumonia.

“We don’t want everyone to go out and get a test because there’s no reason for it," Trump told reporters Friday.

The Centers for Disease Control and Prevention tells people to seek testing if they have certain symptoms of the flu-like illness caused by the coronavirus — fever, cough and trouble breathing — and if they have recently to an outbreak area or have been in close contact with someone who is infected. They should first be tested for the flu and other routine infections.

The vast majority of people recover from the new virus. According to the World Health Organization, people with mild illness recover in about two weeks, while those with more severe illness may take three to six weeks to recover.

The Associated Press receives support for health and science coverage from the Howard Hughes Medical Institute’s Department of Science Education. The AP is solely responsible for all content.