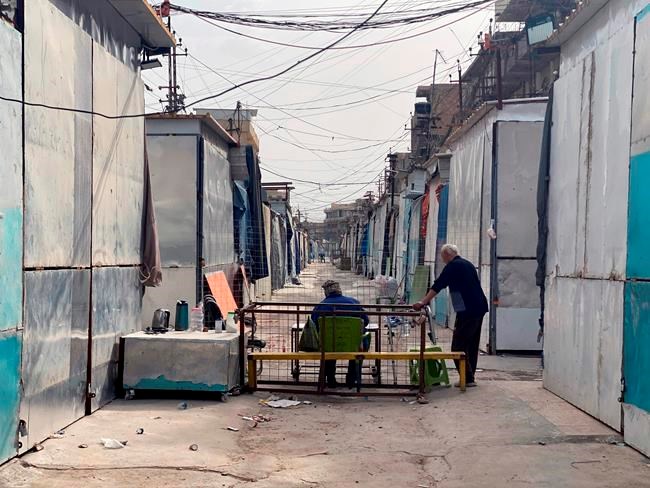 BAGHDAD — Iraq's intelligence chief was appointed on Thursday the country’s third prime minister-designate in just over a month, after the resignation of the most recent candidate amid political infighting, but the path to forming a government remained uncertain.

The upheaval prolongs a leadership vacuum at the helm of the government amid a severe economic crisis and viral pandemic. In December, caretaker Prime Minister Adel Abdul-Mahdi resigned under pressure from mass protests. The protests have since died down amid the coronavirus outbreak but they could still re-erupt as economic conditions worsen.

The candidacy of the second appointee, Adnan al-Zurfi, was imperiled in the past 48 hours when key Shiite parties rallied around Iraq's intelligence head, Mustafa al-Kadhimi, to replace him. His chances were further diminished when the main Kurdish and Sunni blocs withdrew support for his candidacy.

Iraq's president appointed al-Kadhimi, 53, as prime minister-designate shortly after al-Zurfi's resignation. According to Iraq’s constitution, he has 30 days to present a Cabinet lineup to parliament for a vote.

Al-Kadhimi must contend with the unenviable task of producing a Cabinet lineup that satisfies parties across Iraq's fragmented political scene, a task neither of his predecessors were able to . If confirmed as premier, he will have to steer the country through severe financial hardship amid plummeting oil prices, a multi-billion-dollar budget deficit and the unprecedented crisis over the coronavirus pandemic.

His coming to office would coincide with a potentially new chapter in U.S.-Iraq relations, with strategic talks scheduled in mid-June. The future presence of the U.S. in Iraq is on the agenda for discussion, U.S. Secretary of State Mike Pompeo told reporters recently. Meanwhile, the U.S.-led coalition continues to withdraw from Iraqi bases in line with plans to consolidate in just two locations in the country.

The crude-exporting country earned just $2.9 billion from March oil exports at $28 per barrel, slashing in half government projections to fund state spending. Over 90% of Iraq’s state revenue is derived from oil exports.

Iraq is also struggling to fund measures to contain the spread of the coronavirus, with health officials reporting a shortage in testing equipment and ventilators. At least 69 people have died among more than 1,200 confirmed cases in the country, according to Health Ministry figures.

“With my mandate to lead the Iraqi government, I pledge to my people to work to form a government that puts the aspirations and demands of Iraqis as the top priority,” al-Kadhimi tweeted shortly after his appointment was announced.

Al-Kadhimi was appointed by former Prime Minister Haidar al-Abadi as head of the Iraqi National Intelligence Service in June 2016. He had opposed Sadaam Hussein's regime and lived in exile for a number of years, working as a journalist for a time. Though experienced in government, al-Kadhimi's weakness is his lack of a solid political base in parliament, officials and experts say.

His designation on Thursday was attended by key players in Iraqi politics in a show of unity, but that does not ensure the path to parliament will be smooth.

“It’s not a done deal, he needs the votes,” said Sajad Jiyad, an Iraq-based researcher. That means, he will have to learn the lessons of his failed predecessors and “play by the rules."

Al-Zurfi, the second premier hopeful to withdraw since Abdul-Mahdi resigned, never had the opportunity to present his government in parliament. His predecessor, Mohammed Allawi, a former communications minister, stepped down last month unable to muster the quorum necessary to pass his lineup because parties took issue with his choice of ministers.

In a resignation letter to Saleh, al-Zurfi cited “internal and external reasons” that prevented him from carrying out his duties.

Al-Zurfi faced stiff resistance from Iraq’s powerful Iran-backed political parties since his appointment in March. On April 4, eight Iran-backed militia groups issued a joint statement accusing al-Zurfi of being an “American agent” and threatened lawmakers if they approved his proposed Cabinet.

Dr Aniseh Bassiri Tabrizi at the Royal United Services Institute, a , said it was the “perfect example of how Iran, during this pandemic, has managed to maintain pressure and exert its outcome through its influence and its Iran-backed forces in Iraq, and therefore to have an outcome that is more to its national security.”

The unity that brought al-Kadhimi to this moment is still on shaky ground, experts said. The same Iran-aligned parties that back him now vehemently opposed his candidacy in December. Experts now wonder when opposition to al-Kadhimi might arise.

“Will it be during Cabinet formation process? Or later, when he becomes prime minister and has to start making the necessary changes to confront coronavirus and the economic crisis?" asked Jiyad.