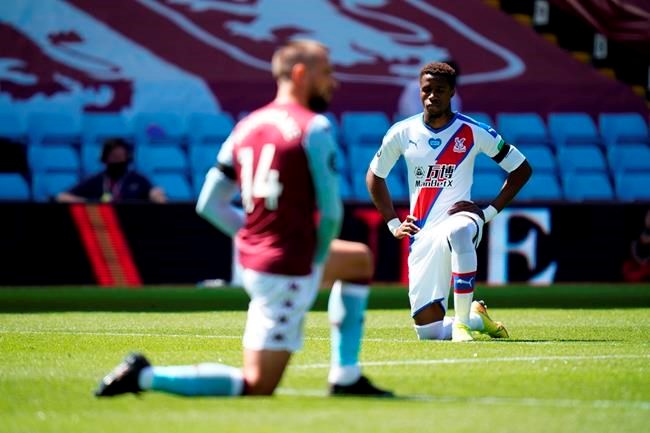 The racist messages and images referenced the Ivory Coast international being Black and showed the Ku Klux Klan. They were sent on Instagram from a user who referenced central England-based club Villa in their name.

“Woke up to this today," Zaha posted on Twitter alongside screenshots.

“We were alerted to a series of racist messages sent to a footballer today and after looking into them and conducting checks, we have arrested a boy,” West Midlands Police said on Twitter. “The 12-year-old from Solihull has been taken to custody. Thanks to everyone who raised it. Racism won’t be tolerated.”

Before kickoff at Villa Park, Zaha — like all players in recent weeks — took a knee as part of the Black Lives Matter campaign.

“He is very unhappy and he’s entitled to be," Palace manager Roy Hodgson said after the 2-0 loss. “These cowardly, despicable acts from people ... presumably trying to get some sort of advantage for the team they support, maybe trying to put some doubts into the head of one of the opposition team’s star players.

“It’s very sad that people resort to the type of abuse that he resorted to ... and yet we expect the player who is being hurt by these comments just to shrug his shoulders and take it as part and parcel of the game."

The Premier League has launched a reporting system to allow players to report abuse that can be followed up by authorities.

“This is completely unacceptable and the Premier League stands alongside Wilfried Zaha in opposing this, and discrimination in any form," the league said in a statement. “We will continue to support players, managers, coaches and their family members who receive serious discriminatory online abuse."