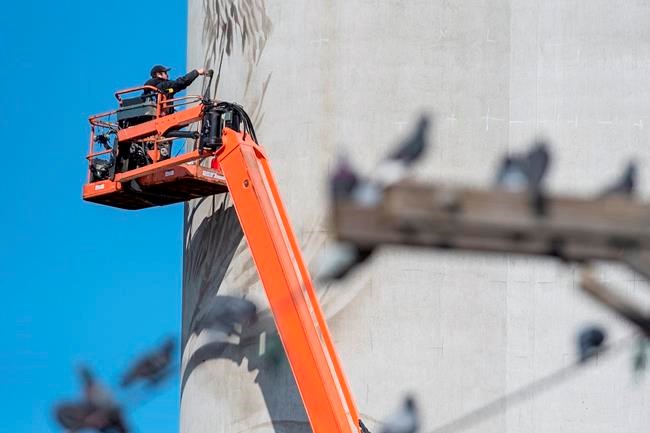 MANKATO, Minn. — Australian artist Guido van Helten is back up in a boom lift and adding to his massive mural on Ardent Mills’ 122-foot silos.

He began the mural last October and worked into early winter before packing up his paint for the rest of the winter.

Noelle Lawton, executive director of Twin Rivers Council for the Arts, said there was considerable discussion among the council and van Helten about whether it would be appropriate to resume the project amid the pandemic, the Mankato Free Press reported.

Van Helten has actually been in the U.S. since February and was planning to start work on a South Carolina mural before returning to Mankato when the weather improved, but that project was put on hold.

Then he got word a couple of weeks ago from his government that any Australian citizens who wanted to return should do it immediately or they wouldn’t be able to as Australia was temporarily closing its borders.

Lawton said that in the end, van Helten decided he wanted to move ahead with the Mankato mural not knowing when he will be able to go home.

She said that in one way he’s fortunate because he has something to work on at a time when most artistic projects have been or delayed during the coronavirus pandemic.

Lawton said they all discussed whether moving ahead would be appropriate during the crisis. “For him it took on more purpose to carry this through. It was supposed to be done last October and it just got started then, so you wonder if it was meant to be.”

She said they also agreed that a non-coronavirus distraction might be welcomed by area residents.

Van Helten has rented a portable storage locker to keep all of his supplies so he doesn’t have to have any contact with Ardent Mills employees, and he is operating his own boom lift.

“So I think it’s the greatest social distancing you can have,” Lawton said.

She said social media posts about the resumption have all been positive. “I think it’s a good distraction for people.”

Van Helten has largely finished the side of the silos that face North Mankato and is now starting on the end before he will begin work on the largest part of the silo canvas facing Riverfront Drive.

“We’re working on some sort of live cam when he turns the corner so people will be able to watch him,” Lawton said.

His design so far drew inspiration from the Mahkato Wacipi.

“The concept is a summary of experiences, observations, and discoveries in and culture in Mankato utilizing the Education Day at the Mahkato Pow Wow,” he stated in a release before the work began. ” … This design brings together the shared ideals of community, diversity, and inclusion; and it pays respect to history while encouraging a positive dialogue on the future identity of the Mankato area.”

He worked with local photographer Sara Hughes to capture images for the design. His previous work includes other silo murals in the Midwest, in Australia and numerous other countries.

The Twin Rivers Council for the Arts, City Center Partnership and Ardent Mills teamed up to bring van Helten to town. The organizers raised at least $250,000 for the project, reaching the goal last May.