Wozniewicz signs letter of intent to University of Wisconsin 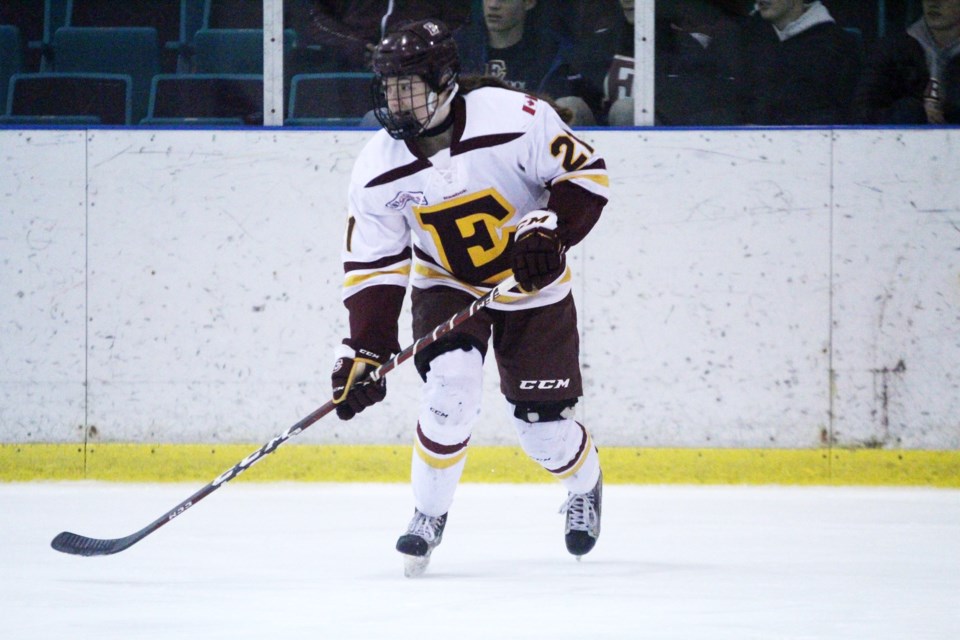 Cochrane hockey player Sarah Wozniewicz has an impressive 52 points, from 23 goals and 29 assists in the 2019-20 season. File Photo.

A rising star from the Edge School's hockey program is getting ready to take the next step in her athletic journey, after signing her letter of intent to attend the University of Wisconsin next fall.

Seventeen-year-old Sarah Wozniewicz, of Cochrane, was last year's Most Valuable Player in the U18 Female Prep division of the Canadian Sport School Hockey League (CSSHL). The then-Grade 11 student registered 52 points in 24 games in the 2019-20 season, leading the Mountaineers in scoring and helping the squad win its first championship in the division.

Wozniewicz said the support she has received throughout her time at Edge School has helped develop her game and prepare her for the next level. The forward has proven to be an offensive juggernaut for the Springbank-based private school, earning nearly a goal a game in her last three CSSHL seasons.

“I think it’s pushed me to be better," the 17-year-old said. "We’ve just got so much opportunity to go on the ice, work out, and then all of the video we do with our coaches. The team atmosphere at Edge just allows you to push yourself and your teammates. We spend so much time together that it’s like a competition between us, but when it comes to game time, we come together."

For Wozniewicz, the step up to NCAA Division 1 hockey, and the University of Wisconsin Badgers, has been a long time coming. She said she verbally committed to the program two years ago.

“Wisconsin just felt right," she said. "I liked how the community was so athletic, and the hockey program just has such a high standard that they hold for themselves.”

Signing the letter in November, Wozniewicz said, was when reality hit home and she knew a long-time goal was coming to fruition.

"It’s actually happening, it’s not just a verbal commitment, it’s on paper, it’s for sure 100 per cent, it’s happening,” she said.

In addition to her accomplishments for the Edge, "Woz," as she is known by her coaches and teammates, also brought home a silver medal after playing for Canada at the International Ice Hockey Federation U18 Women’s World Championship in 2019. She also helped Team Alberta win the gold medal at the 2019 Canada Winter Games, and was the team's top scorer, despite being the youngest player on the roster.

Although Wozniewicz's offence has been a tremendous asset to her team, her defence is where she has developed most during her time at the Edge School, according to head coach Carla MacLeod.

“She’s got a speed to her game that is pretty special, pretty unique," said MacLeod, who is an alumna of Canada's national women's hockey team, as well as the Wisconsin Badgers. "She’s a dynamic player offensively, and has always been able to, over her entire career, generate offence out of a number of different situations. What’s been neat over the last four years is seeing her grow on the other side of the game in her defensive understanding...and recognizing the value of putting that all together.”

Having a young player understand the nuances of play on both ends of the ice is critical to empowering them to understand the impact they can have, MacLeod said. She added watching Wozniewicz develop over the years has been very fulfilling, and she looks forward to seeing the Cochranite lace her skates for her alma mater.

“For a lot of the kids in our program, the ability to play post-secondary is a big dream of theirs,” she said. “It’s a lot of work, it’s a lot of time that they put in in their own growth and their own development. Obviously, we help them every step of the way that we can, so to see her and any of our players play at that next level you become a fan of theirs and you cheer them on. It’s exciting.”

The next level of play will certainly be a challenge, but Wozniewicz said she is excited for the opportunity to learn and grow with a new set of teammates.

“I’m just excited to play with amazing hockey players that are older than me," she said. "College hockey is what you dream of as a kid. Growing up, hockey was always just fun for me. When offers started coming in, it became kind of surreal.

"Hockey can take you places, you can go to university for hockey. Ever since then, I’ve just been waiting for the opportunity to play in the NCAA.”

Wozniewicz will join the Wisconsin Badgers next summer.

Knight and Cornelssen elected to Crossfield Town council
May 13, 2021 9:30 AM

About the Author: Tyler Klinkhammer