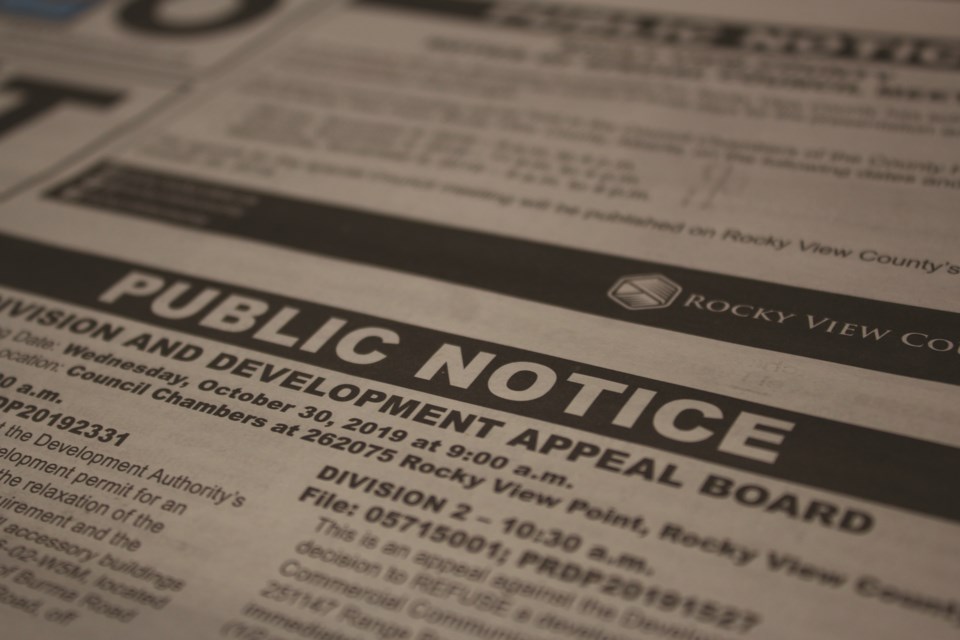 A new Rocky View County (RVC) bylaw will result in changes to how the municipality notifies residents regarding matters of public interest.

“How people consume information continues to undergo dramatic changes,” he said. “Traditional media sources have been in decline and, if you want to use a two-dollar word, disintermediated communication approaches are more popular than ever. That just means you can now talk to people directly through emails, social media, websites and a number of digital media platforms, rather than relying on third parties.”

The bylaw, he said, allows the County to continue using newspaper advertising and mail for delivery notifications, while adding the ability to employ email, social media and other digital technologies.

According to Kaiser, the bylaw provides greater flexibility.

“In the event of a mail strike or a press breakdown or some other external matter, it would be highly questionable if we could conduct council business, because we couldn’t notify the public,” he said.

While the Municipal Government Act (MGA) previously mandated municipalities use local newspapers for public notification, the legislation was amended Oct. 1, 2017 to allow municipalities to choose how they communicate with their residents. The MGA now allows councils to pass a public notification bylaw providing one or more methods of advising proposed bylaws, resolutions, meetings and public hearings.

Under the MGA, a council “must be satisfied that the method the bylaw would provide for” is likely to bring matters “to the attention of substantially all residents” in the area. Kaiser noted more than three dozen Alberta municipalities have passed similar bylaws, including Airdrie.

Speakers in opposition to the bylaw at the public hearing highlighted the detrimental impact the move could have on local journalism.

While he said it was encouraging to hear RVC would continue to use the newspaper as a communication channel, he argued “now is not the time for municipalities to reduce their spending on local media, and newspapers in particular.”

“The public rely on the work of journalists to inform and enlighten,” he said. “Journalists serve as the objective lens for the taxpayer. We represent the public. As public stewards, we not only keep our readers informed, but our elected officials on their toes. We offer a permanent, third-party record.”

Despite voting in favour of the bylaw, Coun. Samanntha Wright expressed some reservations about shifting to primarily online notification.

“My concern is – and again, I do recognize that many people are moving towards the Internet,” Coun. Samanntha Wright said, “however, not everybody in RVC has the Internet.”

More than 92 per cent of RVC residents have home Internet access, according to Kaiser, and the County generally does not hear about accessibility concerns.

He assured council for the “immediate foreseeable future,” RVC would continue to advertise the way it currently does, but could reevaluate with the addition of a new online portal, which he said he hopes will be operational in early 2020.

“I do not foresee a time when we would put nothing in the Rocky View Weekly to announce that there was a public notification; it’s just the level of detail we would change,” he said.