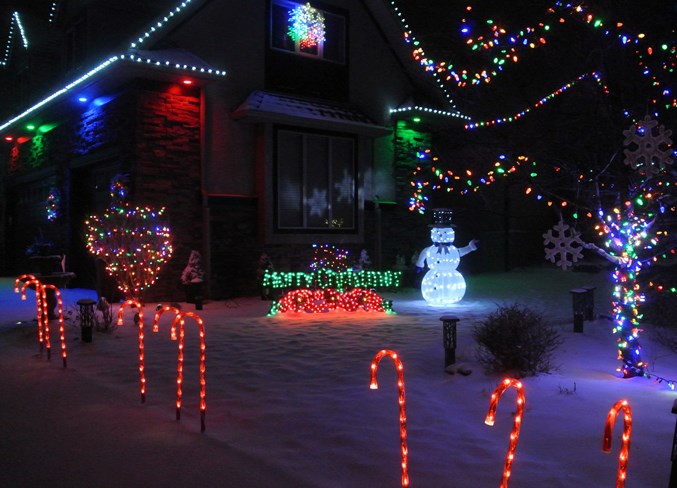 The Light Up Springbank contest is coming back to Division 2 this holiday season.  Rocky View County Division 2 Coun. Kim McKylor began the community-wide Christmas lights contest last year. She said the idea came when she was door-knocking during the 2017 election campaign. “I think people are happy about it,” she said. “They want to participate and I just think it’s a great way to engage the community and give people something fun to do.  “Plus, it’s an activity for families, driving around and looking at the Christmas lights.” The inaugural contest received more than 20 entries and was well-received by the community, according to McKylor, with feedback from residents that it should expand. This year, Light Up Springbank will include three categories, McKylor said, including acreage property (two or more acres), small property (less than two acres) and people’s choice.  McKylor said the highlight from last year was seeing the creativity expressed by some of the households, and the time and effort that went into their displays.  “There were some pretty fantastic elements, with music and strobe lights,” she said. “You’ve seen those YouTube videos where they have these things synchronized to music? We had a few of those, as well.” The deadline for entries is Dec. 20 at noon, and voting will take place that evening from 6 to 9 p.m. McKylor said the winners for each category will be notified via email and Facebook, and will be announced in her January newsletter.  The winner of the people’s choice category will be determined by the number of likes received on photos of the houses, which will be posted on McKylor’s Facebook page, she added.  The top three contestants in each category will receive prizes donated by local businesses. McKylor said there are more than $2,000 worth of prizes this year, including gift certificates to Boston Pizza and CrossIron Mills shopping mall, free art classes and movie passes, three months’ free storage at Springbank Self Storage, camping chairs from Guaranteed RV and a homemade Christmas tree skirt.  McKylor said she encourages Division 2 residents to participate this year.  “You’re not just doing something for yourself, you’re doing something for the broader community,” she said. “Even when you’re driving on the highway, coming into Springbank and seeing them in the distance, I think it’s pretty exciting to see.” While the contest is limited to households in her division, McKylor said she hopes it can expand to include businesses next year, and perhaps neighbouring divisions in the future.  “Ultimately, I would love that to be the goal,” she said. “I would love for the Div. 1 councillor and the Div. 3 councillor, for us to do this as a joint effort.  “I think it could evolve into something even bigger, which would be pretty cool.” To register, email your name and address to McKylor at lightupspringbankdivision2@gmail.com