Sanctioned RVC councillors have their day in court 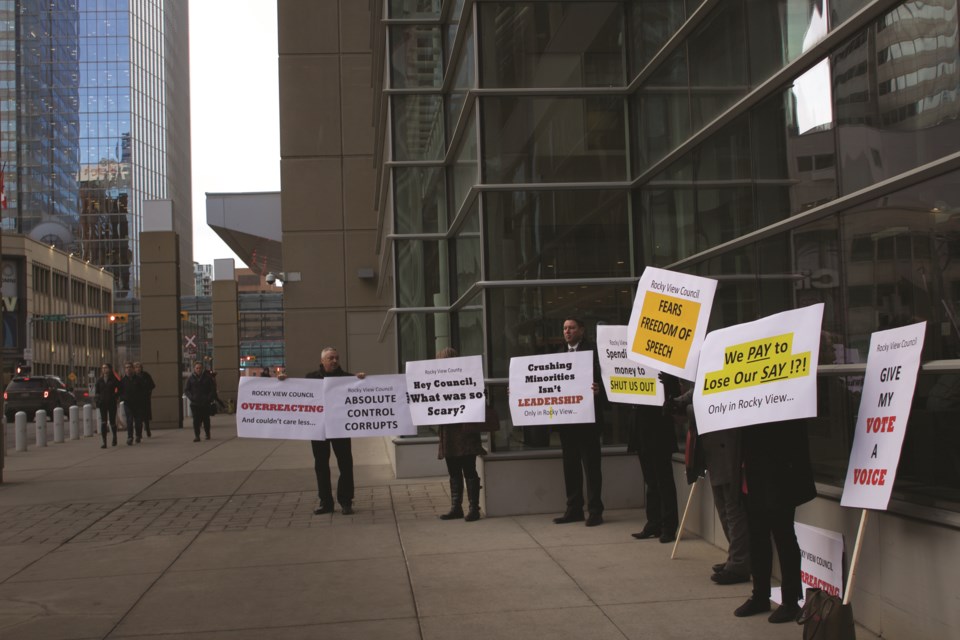 Supporters of Couns. Kevin Hanson, Samanntha Wright and Crystal Kissel demonstrated outside the Calgary Court Centre Jan. 22, before a Court of Queen's Bench of Alberta hearing related to sanctions imposed on the councillors. Photo by Ben Sherick/Rocky View Weekly

Appearing before Justice James Eamon at the Calgary Court Centre, lawyers for both sides made oral submissions to the Court of Queen’s Bench of Alberta over the course of approximately five hours.

“We would ask that the RVC sanctions and the CAO sanctions be declared void and struck down in their entirety,” said lawyer Michael Niven, who, along with Michael Custer, represented the three councillors.

Lawyer Janice Argios, meanwhile, argued on behalf of the County that the sanctions should stand as long as council is found to have acted in good faith and with reasonable actions.

“The issue is, should the court intervene?” she asked.

Niven submitted the reason the sanctions should be struck down were three-fold – the councillors’ procedural rights were violated through the passing of the sanctions, the sanctions were passed in bad faith and they were patently unreasonable because they go too far.

On the first point, Niven said, council’s reliance on a report by investigator Sean Ward raised the apprehension of bias and thus violated procedural fairness, as his law firm – Reynolds Mirth Richards and Farmer – had previously completed work for RVC and for Kneehill County while CAO Al Hoggan was employed there.

While the law firm has worked for the County, Argios acknowledged, she contended it had not represented any of the involved parties individually, and “there was no basis for alleging bias in this case.”

On the issue of bad faith, Custer tried to establish a demonstration of an “ulterior purpose” on the part of council in passing the sanctions by pointing out the punishments had the appearance of being preplanned, and that Coun. Jerry Gautreau – who was initially involved in sharing the confidential legal opinion with another unauthorized lawyer – was treated differently.

“The Code of Conduct must apply to all councillors equally,” Custer said. “Different treatment of Gautreau indicates there are reasons behind council’s decision other than mere breach of confidentiality. If that were all it took for sanctions to be imposed, then Gautreau would have been sanctioned to the same degree as the applicants – that did not happen. That indicates the applicants were sanctioned for ulterior purposes.”

Argios, in turn, argued the onus was on the applicants to demonstrate bad faith by council, and have not provided evidence the sanctions were imposed for any reasons other than the code of conduct breaches. Further, she said, Gautreau was not sanctioned because he, unlike the other three councillors, “moved on.”

“What the applicants are asking the court to do is speculate on council’s motives,” she said. “Speculation is not sufficient to rebut the presumption of good faith.”

Niven then argued the sanctions were unreasonable because they were “overwhelming, aberrant and grossly disproportionate to the conduct they seek to penalize,” and that barring the three councillors from travelling and representing the County, from sitting on County committees and from communicating with administration prevents them from fulfilling their duties and has the cumulative effect of reducing them to “second-class councillors.”

“It’s frustrating and upsetting for my clients, but the real losers here are their electors,” he said.

Argios countered the trio remain voting members of council and still receive information from administration to inform their decisions, and municipal councillors do not have a right to sit on committees or travel on the behalf of a municipality.

Niven also submitted limits placed upon the three councillors by Hoggan in May relating to how he and his staff would communicate with them amounted to “sanctions” that were outside of his legislated authority, while Argios contended, as the link between council and administration, the CAO is within his purview to place parameters on how councillors interact with his staff.

Argios’ case painted a picture of three disgruntled elected officials who found themselves in a minority on a series of votes and, rather than “move on” and find a way to work constructively with the rest of council and the CAO, have embarked on a path to escalate tensions and try to discredit their colleagues. Along the way, they breached the code of conduct, she said, and were therefore sanctioned.

“Throughout, the applicants have not disputed the conduct that the investigator found breached the code of conduct,” Argios said. “Their position is, ‘We haven’t done anything wrong’…. They haven’t apologized, they haven’t acknowledged any wrongdoing.”

Niven made the distinction that the three councillors did not object to the fact Hoggan was hired, but rather what they viewed as a “flawed process” with “several stumblings” they hoped to avoid in the future.

Throughout the proceedings, Justice Eamon directed frequent questions to both sides.

“The oral submissions are very helpful,” he said. “I tend to use hypotheticals and whatnot in my questions, so I’m not trying to telegraph to anybody which direction I’m going.”

Eamon granted both sides will have some additional time to submit further evidence and indicated a decision on the case could be reached by late February or early March.