An effort by two Rocky View County councillors to reinstate advertising in the Rocky View Weekly failed at a regular council meeting Nov. 24.
Dec 1, 2020 7:00 AM By: Jordan Stricker 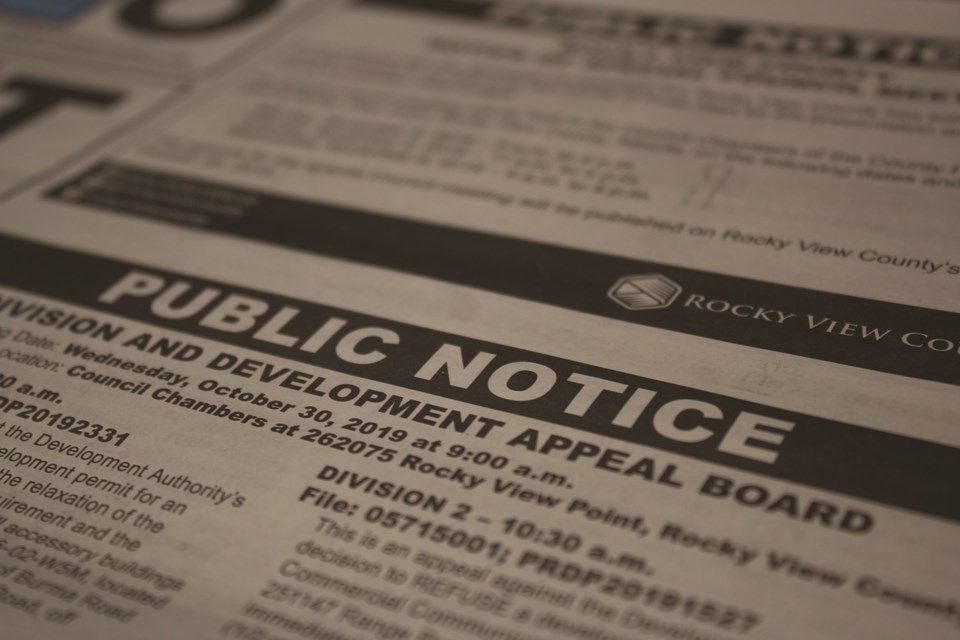 A notice of motion by Couns. Samanntha Wright and Kevin Hanson to resume advertising in the Rocky View Weekly was not supported by council.. File Photo/Rocky View Publishing

An effort by two Rocky View County councillors to reinstate advertising in the Rocky View Weekly failed at a regular council meeting Nov. 24.

“We still have a number of residents who can’t access Internet from home,” said Coun. Samanntha Wright. “I just heard that people preferred the information would be back in the Rocky View Weekly.”

The matter originated as a notice of motion from Wright and Coun. Kevin Hanson at council’s Nov. 10 meeting and was considered at the following meeting. The motion failed 6-3, with Hanson and Wright only receiving support from Coun. Crystal Kissel.

Council previously voted to end advertising in the publication July 14. At the time, County staff indicated the Municipal Government Act (MGA) allows Alberta municipalities to forego written notification and newspaper advertisements in order to pursue alternative methods like electronic means. To do so, a council had to adopt a bylaw like the County's Public Notification Bylaw. The MGA states the chosen method of advertisement should bring proposed bylaws, resolutions, meetings and public hearings “to substantially all residents in the area.”

In ceasing advertising in the Rocky View Weekly, the County made its website, rockyview.ca, its main method of communicating with residents.

Administration's case to end advertising had to do with the temporary shutdown of the publication due to the COVID-19 pandemic. At the time, Executive Director of Community and Business Grant Kaiser said the County’s advertisement channels had been “ramped up,” and was how the County would notify residents of important notices going forward.

During the deliberation on the notice of motion, Kaiser said the County now has 2,500 Facebook followers and 4,300 Twitter followers. The County sends new information to these social media channels, which direct people to the website. Additionally, Kaiser said the County’s website has seen a 433 per cent increase in visits to public notification pages.

During the Nov. 24 meeting, Hanson argued residents using the County’s website was not a natural occurrence, and obtaining a newspaper was easier

“There is no reason not to have parallel channels,” he said. “This is supporting small business. They do their best to provide interesting background articles, reporting what’s going on and what matters to people in RVC. It’s a slightly different tone than what you get off of the corporate website.”

Hanson added the $73,000 the County used to pay the publication for advertising was a small price to pay compared to its benefit to many residents.

Coun. Greg Boehlke said when he served as reeve, he didn’t receive a single response from residents regarding the County’s decision to stop advertising in the newspaper.

“I think if you go out and dig around and ask people, you can find an answer that suits your purpose,” he said. “But, as far as people coming back saying they need the paper, they didn’t.”

Reeve Daniel Henn, meanwhile, said he did initially hear from residents about the change.

“I will specify elderly residents missed the paper and the information posted in the Rocky View Weekly,” Henn said. “Since then, the same residents have said they visit the website. They have adapted.”

Henn added during his short time as reeve, he’s spoken with municipal leaders and administration at three other municipalities that have stopped newspaper advertising and gone the social media route.

“I think people have moved on quite well,” he said. “Change is tough. I think we need to give our residents a bit of credit; they can overcome.”