“Our other advertisement channels have been ramped up,” Grant Kaiser said.
Jul 24, 2020 3:02 PM By: Jordan Stricker 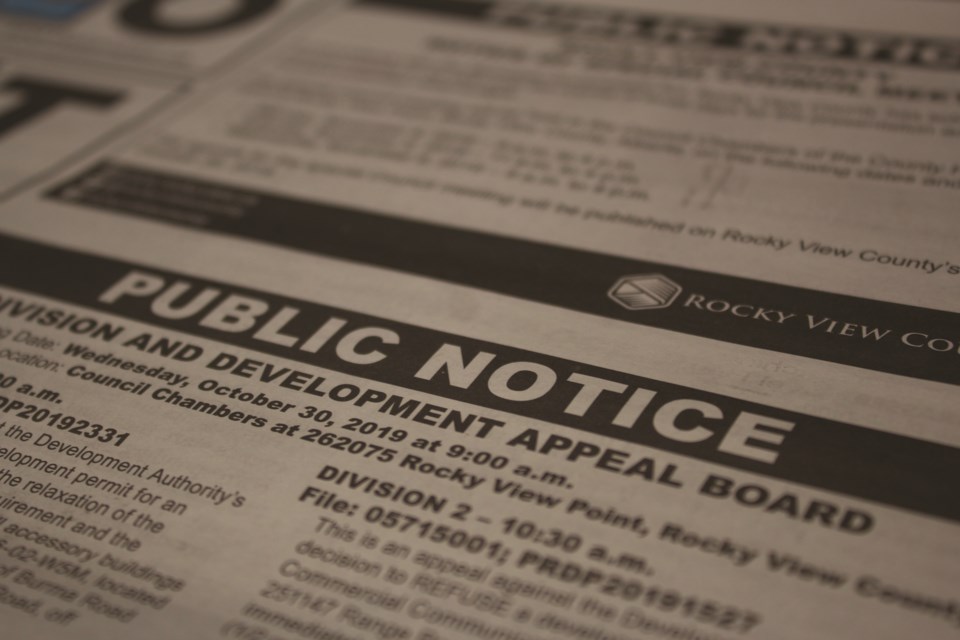 Rocky View County has passed an amendment to its current Land Use Bylaw that will halt newspaper advertising. Photo by Ben Sherick/Rocky View Publishing

An amendment to Rocky View County’s (RVC) Land Use Bylaw (LUB) will see the County cease newspaper advertisements in favour of posting information on its website.

The decision has RVC residents saying the impact leaves council “skating on very thin ice” when it comes to fulfilling their legal obligation.

“They have to be satisfied that what their doing is likely to reach substantially all of the residents,” said Janet Ballantyne, head of advocacy group Rocky View Forward (RVF). “In my opinion, I don’t think I could be satisfied.”

At a regular meeting July 14, RVC council gave second and third reading in an 8-1 vote to modify the LUB. According to Sandra Khouri, development officer with Planning and Development Service, the amendment allows the County greater flexibility with how it notifies residents about matters of public interest. Khouri added the amendment would help when written notification is not “feasible or available.”

“Presently, the public notification requirements in the LUB are in conflict with the Public Notification Bylaw (PNB),” she said. “The amendment will ensure consistency between both bylaws.”

The changes to public notifications approved by council are also within the new LUB. If that bylaw is approved July 28, it will come into effect Sept. 8.

Council adopted the latest PNB Nov. 26, 2019. The bylaw named the County’s website as the primary method of public notification, in addition to using email, social media and other emerging digital technology.

At the time, Grant Kaiser, executive director of Community and Business, said he did not believe the County would move away from advertising in the paper for "the immediate foreseeable future."

“I do not foresee a time when we would put nothing in the Rocky View Weekly (RVW) to announce that there was a public notification; it’s just the level of detail we would change,” he said.

According to administration's report included in the agenda for the July 14 meeting, the Municipal Government Act (MGA) allows Alberta municipalities to forgo written notification and newspaper advertisements in order to pursue alternative methods, such as electronic means. To do so, a council must adopt a bylaw like the County's PNB. The MGA states the chosen method of advertisement should bring proposed bylaws, resolutions, meetings and public hearings “to substantially all residents in the area.”

According to a 2016 federal census, there are approximately 39,400 residents in RVC.

According to Kaiser, RVC will use the newspaper when it feels advertising on its website does not adequately reach the public.

“We have neither plans nor no plans to use the newspaper,” he said. “We consider each case independently.”

He added the County has operated for nearly six months without using newspaper advertisements.

“Our other advertisement channels have been ramped up,” Kaiser said. “Those are what we are using right now.”

Kaiser did not respond to multiple media inquires regarding how RVC’s media channels had been “ramped up.”

Ballantyne opposed the amendments at the public hearing.

“Kaiser may not have gotten any complaints about the lack of newspaper advertising, [but] let me tell you RVF has,” she said.

She argued that while all municipalities have the option of scaling back their newspaper advertising, others haven’t done so.

“I guess that leaves the question of why is there the difference?” she said. “We’ve got some real concerns about the specifics [of the amendment].”

She also said many residents rely on newspaper advertising to stay up-to-date about what is happening in their immediate neighbourhood, and without it, they feel uninformed.

Coun. Samanntha Wright was the only councillor opposed to approving the amendment. Wright said her original understanding when the new PNB was adopted was that RVC would still use print media. She noted the RVW had been out of circulation for part of this year due to COVID-19, but with the publication back, it should be used.

The RVW halted print distribution from April 7 to June 16 due to slowed revenues resulting from the COVID-19 shutdown.

“We have a page on our website that talks about supporting local business,” she said. “I think as a municipality that surrounds a city, often what is happening gets drowned out by that city. I think it is super important that we put this information in the RVW.”

Reeve Greg Boehlke later said the amendment was a step in a new direction and would cut down on expenses, adding the payment for advertising when RVC has its own outlet was a factor. He also said there have been no ramifications of “big consequence” since the change was made.

He added there “may or may not have been” movement by council to control messaging.

“At least we have control over what we put out there as a story of what actually happened,” Boehlke said.

“We have to have facts to back up our statements. A news media outlet can make any statement they want and they don’t have to have any credibility. They have no skin in the game.”

RVW is a member of the National Media Council, which adjudicates complaints about its news coverage. The newspaper is also subject to Canadian libel and defamation law.

Despite the amendment, Boehlke said information is still available to residents, but “through a different process.”

Boehlke added council can be “called to task” to justify what they are doing. He said the public could challenge RVC if it put out something on their platforms that was blatantly untrue.

“We don’t cater to one side or the other,” Boehlke said. “We tell the truth straight down the middle.”

Council’s decision “wasn’t about pumping the County’s tires all the time,” he said, and he hoped RVC’s website would not “get to propaganda.”