Residents vow to continue fight against SR1 during information session

“Giving up on this SR1 now would continue to expose the region to flooding for at least eight or nine or ten years,” McIver said. “It’s been seven years without flood mitigation. We cannot afford to go another seven years.”
Oct 16, 2020 12:00 PM By: Chelsea Kemp 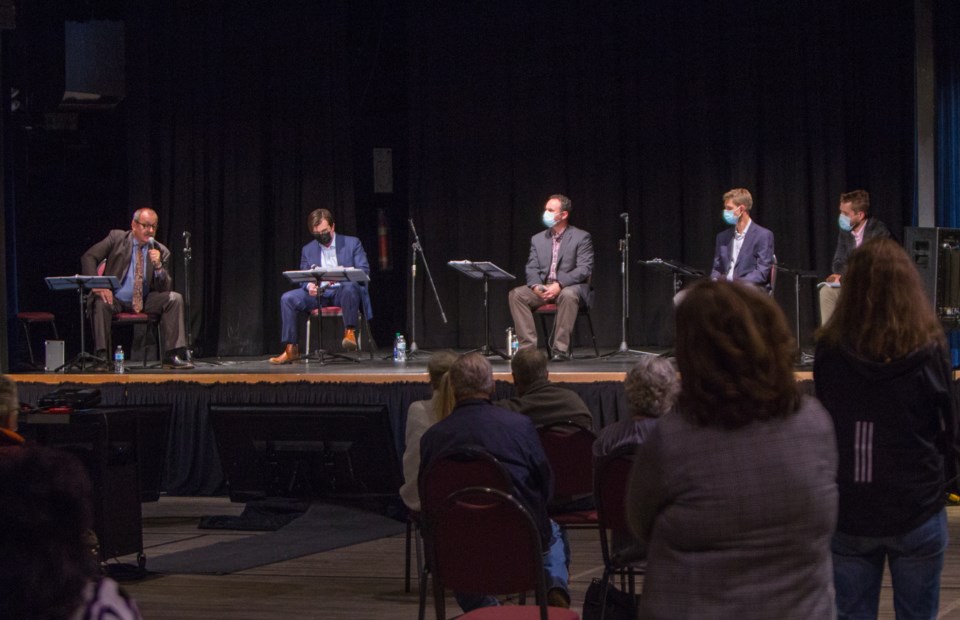 An Oct. 8 information session on the proposed Springbank Off-Stream Reservoir (SR1) was met with anger and distrust from residents.

The session at the Bragg Creek Community Centre featured Minister of Transportation Ric McIver, Banff-Kananaskis MLA Miranda Rosin and a panel of experts. During the session, Rosin said she was grateful to see the community gather to learn and share their concerns about SR1.

“I know how important this project is to you and the community,” Rosin said, adding flood mitigation in the Bragg Creek and Springbank areas has been a top concern among residents.

According to Project Manager Matthew Hebert, SR1 will be located approximately 15 kilometres west of Calgary. Key components of the project include a diversion structure, floodplain berm, diversion channel, dam and low-level outlet. The reservoir will activate when water reaches 160 cubic metres per second and it can hold up to 77.2 million cubic metres in storage.

The reservoir is projected to cost around $432 million and is eligible for $168.5 million under the government of Canada's Disaster Mitigation and Adaptation Fund. McIver said about 25 per cent of the land needed for the project has been acquired.

SR1 is currently moving through the regulatory process at the provincial and federal levels, McIver said. The project is designed to save money in the future, should a disaster similar to the 2013 flood – which caused billions of dollars in damage – occur.

The reservoir is one of several planned flood mitigation projects for southern Alberta. Berms in Bragg Creek will be delivered by Rocky View County (RVC) and potential exists for another project in the Redwood Meadows area.

“SR1 is not a silver bullet, it’s part of a larger system," McIver said. "By itself, it’s not going to get the job done."

He noted SR1 was selected as a flood mitigation project because it has a shorter construction period, lower risk, reduced environmental impact, is located downstream on the Elbow River and has a lower cost in comparison to other proposed projects.

Changing plans now could add years to the project which has been needed since 2013, McIver cautioned.

“Giving up on SR1 now would continue to expose the region to flooding for at least eight or nine or 10 years,” he said. “It’s been seven years without flood mitigation. We cannot afford to go another seven years.”

During the session, many residents questioned the project's transparency, cost, size, benefits and disruption.

Elbow River Estates Community Association president Gordon Lang raised concerns about the pollution that could be created by the project when the reservoir sits empty. Lang said he lives downwind of the proposed project and is concerned sediment will be released into the air.

“I’m extremely disappointed to hear that SR1 has been approved essentially,” Lang said. “I know we’ve got a dictator in Ottawa – I didn’t realize we have one in Edmonton.”

Environmental management principal Dave Brescia said the reservoir has been designed to match the water levels of the 2013 flood and will leave behind low amounts of sediment. He added the area will be carefully monitored after a flood to ensure revegetation is taking place as planned and limited sediment is present.

Highland Stock Farm owner Rob Matthews, meanwhile, said he thinks the provincial government is failing to listen to residents and their concerns. Matthews expressed a common belief among opponents of SR1 that a reservoir at McLean Creek is a better option because there would be no need to purchase land and fewer roadways would be affected.

“All of us that live in this community are trying to understand how you can say to us that it’s going to be cheaper to do SR1 than it is up at McLean Creek and Allen Bill Pond,” he said. “It just doesn’t make sense.”

He also questioned the province's claim that they have talked to all impacted landowners.

“You haven’t talked to half of the landowners in that area,” Matthews said. “These are my friends that I grew up with that their land is being sacrificed – they have not been asked if they would like to sell their lands.”

Debbie Vickery, a Springbank resident, said it has been disappointing to see residents are not being consulted.

“We are the people who live here, not you,” she said. “This is our home and you guys sign a piece of paper and say it’s OK – it’s not OK.”

The community has rallied together against SR1, she said, and many question why McLean Creek is not a viable alternative.

Natural systems design engineer Matt Wood said there are several reasons why SR1 was chosen over McLean Creek, including SR1's close proximity to Calgary, a larger catchment area to catch water from floods beyond the snowpack, a shorter construction timeline, fewer risks, lower estimated costs and a lower environmental impact.

Echoing Vickery's concerns, George Brindle said the SR1 process has been extremely disappointing for residents, especially because it has been challenging to connect with Rosin to raise concerns about the project.

“This is money being spent to benefit a few people,” Brindle said. “This proposed project benefits a handful of voters who knowingly, willingly built and bought in a flood plain. They knew the risk and they’ve come to us to ask them to pay for their foolish behaviour.”

Karin Hunter, president of the Springbank Community Association, called for transparency regarding the project and its associated costs. She noted the projected figure does not include money paid to Tsuut’ina First Nation and Rocky View County or the cost of working with pipelines and moving roads.

“You seem to presume that there’s no choice, you have to continue with SR1– it’s too late, it’s been too long,” Hunter said. “There’s always a choice to make the right decision…We will continue to fight this project, we will see you at the regulatory hearings and we will continue to raise the issues and represent our community.”