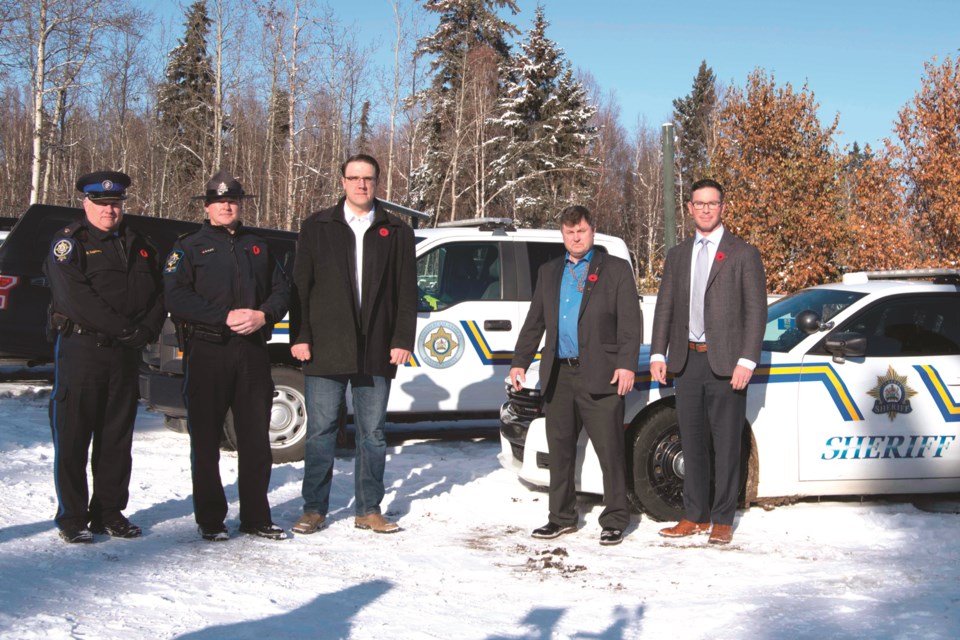 The United Conservative Party’s (UCP) multi-pronged plan includes four items, and responds to concerns raised during the 20 town halls Schweitzer hosted throughout Alberta, including stops in Airdrie, Bragg Creek and Springbank. A chief sentiment at the meeting, Schweitzer said, was a feeling that property owners have fewer rights than criminals.

“Part of the announcement was to address those concerns,” he said, “to make sure that law-abiding Albertans know they have certainty and the ability to protect their property.”

According to a Nov. 6 release, the government will create the Rural Alberta Provincial Integrated Defence Force by expanding the roles of 400 peace officers in the Fish and Wildlife Enforcement Branch, Commercial Vehicle Enforcement Branch and the traffic arm of the Alberta Sheriffs Branch. According to Schweitzer, these officers will receive additional training so they can provide further support to police.

“They can respond, potentially, to certain 911 calls, they can provide backup when a backup car is needed to police for an emergency situation,” he said. “They can also take on additional Criminal Code matters, additional matters for our roads and highways.”

Schweitzer acknowledged broadening the authority of peace officers is not a replacement for additional police officers, and said the government is continuing the conversation to determine the best funding model for rural policing.

The government also announced changes to the Occupiers’ Liability Act, saying it would “eliminate the liability of law-abiding property owners who are protecting their property against trespassers who are, or who are believed to be, in the commission of a criminal act,” retroactive to Jan. 1, 2018. The approach will allow people to take “reasonable steps” to protect their property, Schweitzer said.

The government also proposes a five-fold increase to the maximum fines for trespassing offences – up to $10,000 for a first violation and $25,000 for a subsequent violation, as well as up to six months of prison time. Corporations that help or direct trespassers would also face fines up to $200,000.

Another measure announced is a crack-down on scrap metal theft. The government proclaimed the Scrap Metal Dealers and Recyclers Identification Act, which was passed in 2012 but not proclaimed. Under the act, regulations will be put in place by spring 2020 requiring dealers and recyclers to obtain proof of identification from scrap-metal sellers, and record and retain details of the transactions in order to deter theft.

The province will also offer a new program enabling communities to submit a statement describing how crimes have affected the community as a whole. Community impact statements will be available in January 2020, according to the press release.

“It’s not going to solve all the problems, but it’s a first step in the right direction to combating rural crime,” Schweitzer said. “Lots more can be done, and lots more will be done.”

Airdrie East MLA Angela Pitt praised her government’s approach, saying it was just the beginning of the UCP fulfilling its commitment to address rural crime.

“The measures brought forward by our government will provide the strongest protections for rural residents in Canada, and I am proud of the work that has been done,” she said.

The NDP, meanwhile, criticized the plan for not including any “new boots on the ground.”

“Our plan – investing in officers, civilian staff and crown prosecutors – was working,” Kathleen Ganley, NDP Opposition Justice Critic, wrote in an emailed statement. “Our investment in crime reduction units that target prolific offenders and measures to target the root causes of crime are lowering crime rates. We know there was still more work to do, but replacing a plan that was working with a shell game that doesn’t include new boots on the ground definitely won’t help.”