Inter-municipal plans to extend Calgary Transit service into Chestermere later this year are still chugging along.

Inter-municipal plans to extend Calgary Transit service into Chestermere later this year are still chugging along.

According to Chestermere Mayor Marshall Chalmers, the municipality is working with the City of Calgary to extend Calgary Transit’s MAX Purple Bus Rapid Transit (BRT) route into the lakeside city.

“We know the residents are looking forward to having a transit option and we’re pleased and hopeful we’ll be able to deliver on another campaign promise,” he said.

The MAX Purple BRT route currently takes riders to and from downtown Calgary and the East Hills Shopping Centre along 17 Avenue SE. The shopping centre is just a few kilometres away from Chestermere city limits.

“A lot of the background and summary work has been done now,” Chalmers said. “There are capital expenditures for bus shelters and things like that so we’re figuring all that out. We hope to have a finalized agreement here in the coming months.

“A lot of work has gone into this since last fall, from both sides.”

There is high demand for a public transportation service in Chestermere, according to Chalmers. He said having access to transit would benefit the city’s residents who commute to Calgary for work or post-secondary education, as well as seniors and families. Public transit would also reduce traffic congestion along Chestermere Boulevard and 17th Avenue SE.

The topic of public transit returned to Chestermere City council on March 16, when Municipal Planner Sara Alinaghi Pour provided an update on the progress of transit service discussions between the two municipalities.

Her report included a map of 16 possible bus stops that would be built on a loop around the west side of Chestermere Lake. 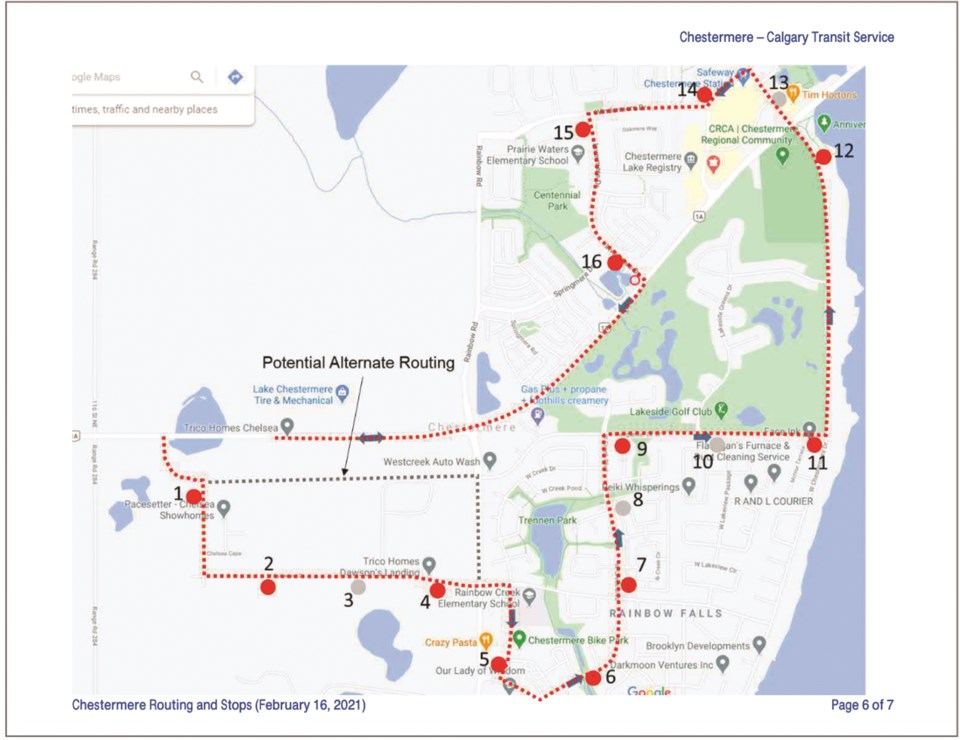 “The whole idea is to start small and build out as ridership and the needs increase,” Chalmers said.

In addition to the report, council also carried forward second reading of a transit bylaw on March 16. According to Chalmers, the bylaw, once ratified, will mirror Calgary’s transit bylaw in outlining passenger behaviour and what they can and cannot do while riding a bus in Chestermere.

“Everybody is going to be clear on behaviour and there are fines if you step outside of that,” Chalmers said. “We have second reading done and we’re really excited to bring this to Chestermere.”

Chalmers added a date has not yet been set for third reading of the bylaw.

“They’re still working out details,” he said. “Everybody is working toward having this wrapped up in the next couple of months and being ready for ridership no later than early fall.”