Nature First moving ahead with plans

An organization formed to work to protect and promote the environment in Airdrie and area has officially obtained not-for-profit society status. Ken Hoehn, chair of Nature First Airdrie and Rocky View Foundation, made the announcement Aug. 23.
Aug 28, 2018 12:01 AM By: Airdrie City View 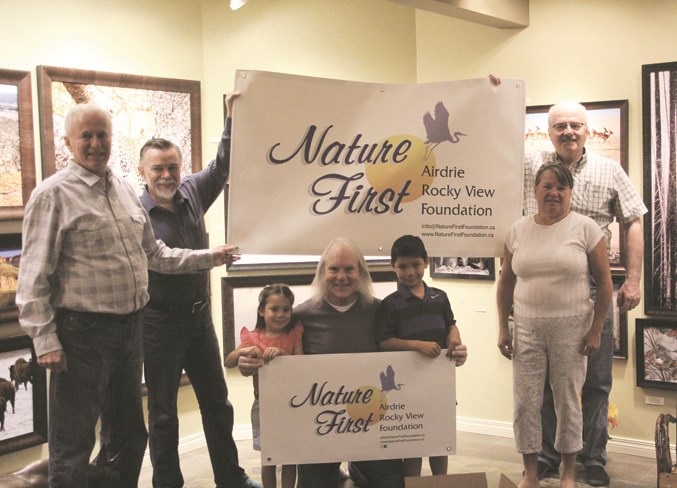 An organization formed to work to protect and promote the environment in Airdrie and area has officially obtained not-for-profit society status. Ken Hoehn, chair of Nature First Airdrie and Rocky View Foundation, made the announcement Aug. 23. “We’re proud of this; it’s a big step for us,” he said. According to Hoehn, Nature First’s goal is to create a large area within Airdrie and area specifically for wildlife conservation, and to work with Rocky View County (RVC) to expand that area over time. The group would ultimately like to explore the possibility of getting provincial park status for the site, he said. Glen Collin – a well-known Airdrie artist – designed the foundation’s new logo, which features a glowing sun and a blue heron. Collin said he was inspired by the blue herons he used to see on Nose Creek. “Now, you don’t see the blue heron on Nose Creek, because he’s gone. The position of the blue heron on [the logo], he’s actually leaving us, flying off,” he said. “That’s symbolic of why we want to save a portion of land.” In early September, Hoehn said, the organization will begin forming subcommittees to work on issues such as fundraising and working with local governments. “We’ll be speaking with RVC and the province and different agencies like that,” he said. “There’s a grant function...that will apply for grants that will support our cause.” A fundraising committee will work to garner sponsorship from local businesses and corporations, he added, while a third subcommittee will work on event planning to help organize a yearly celebration and what Hoehn called “splash events” throughout the year. Nature First will kick off a membership drive during airdrieFEST, Sept. 8 at Airdrie City Hall. Vice Chair Fred Burley said the organization is hoping to sell a lot of memberships that day, while raising awareness about its cause. “We’re going to have three of Ken’s photos on display that are going to be raffled off for anyone that buys a membership between now and 3:30 p.m. the day of airdrieFEST,” he said. “These prints range anywhere in retail up to $1,500. If you donate $100, you get entered into the draw, and you also get one of Ken’s books.” Memberships are $20 per year. The first 100 people to become a member will receive a numbered membership card to show their early support for Nature First, Burley added. “What we’re doing is something this community really wants and needs for the future,” he said. “So often, we look back at things and say, ‘Oh, I wish we had done that, then,’ but we’re doing it now, for the future. It won’t be here in 40 years if we don’t do something, now.” The organization has also launched a website at naturefirstfoundation.ca with more information.

Survey suggests 40 per cent of Alberta doctors have considered leaving province
Jul 10, 2020 11:43 AM